Against all odds: from slavery to priesthood to sainthood 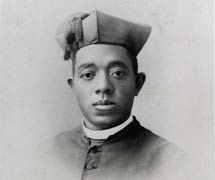 Nine years before President Abraham Lincoln offered his immortal words dedicating the killing fields of Gettysburg, Pa., in 1863, Augustus Tolton, an infant slave, was baptized by Fr. John O’Sullivan at St. Peter Church in Brush Creek, Mo. It was the practice of pious Catholic slave owners to have their slaves baptized Catholics.

In 1880, Augustus (sometimes called Augustine) Tolton entered Urban College seminary run by the Propagation of the Faith in Rome because no U.S. seminary would open its doors to him. In 1886, he was ordained a priest for the Quincy, Ill., diocese at St. John Lateran Basilica in Rome and offered his first Mass in St. Peter’s Basilica, before being sent back to the United States.

But what does Tolton’s life mean for us today? What relevancy does his achievement in overcoming the evil of racism have to do with our lives?

Tolton began his ministry in the Quincy diocese, but he was forced out by a white Catholic priest. Tolton was permitted to transfer to the Chicago archdiocese and began pioneering ministry to blacks in downtown Chicago.

After 11 years of remarkable pastoral service, Tolton died of heat stroke at the age of 43. His death was mourned by thousands. He is buried in St. Mary’s Cemetery near Quincy.

During the 2009-2010 “Year of the Priest,” Chicago Cardinal Francis George wanted to raise up a Chicago priest to “honors of the altar.”

“Fr. Tolton’s name instantly came up,” said Auxiliary Bishop Joseph Perry, the postulator for the cause of sainthood for Tolton. Perry, one of 16 current African-American bishops in the United States, added, “Tolton’s reputation looms large.”

In March, George announced his intention to pursue the cause of sainthood for Tolton, the first identified U.S. priest of African descent.

“Fr. Tolton’s life is a testimony of the Christian spirit in the face of the evil of racism,” Perry said.

Tolton’s life was one of drama, difficulty, suffering and achievement.

His mother escaped slavery in a dramatic overnight dash with two small children on foot and with an infant in arms. The journey included a harried rowboat ride while ducking gunshots. The ragtag family walked into Quincy, where former slaves were offered safety and access to a station of the Underground Railroad.

Tolton’s father had already escaped slavery, joined the Union Army and died of dysentery before ever being reunited with his family.

The Tolton family was embraced by a local Catholic pastor, Fr. Peter McGirr, who nurtured Tolton’s vocation to the priesthood. From his earliest days, Tolton was recognized for his intelligence, discipline and piety.

Throughout his life, Tolton’s goodness attracted the friendship of the Franciscan Friars, the School Sisters of Notre Dame, the Josephite Fathers, cardinals and countless laypeople, who served as defenders, supporters, spiritual guides and intermediaries.

As Tolton began to develop his ministry to black Catholics in Chicago, he wrote to St. Katherine Drexel, foundress of the Sisters of Blessed Sacrament in Philadelphia. Records show that Drexel donated $36,000 to Tolton’s ministry.

A well-researched biography of his life was written by Caroline Hemesath, a Sister of St. Francis in Dubuque, Iowa. From Slave to Priest was originally published by Franciscan Herald Press in 1973, and reprinted by Ignatius Press in 2006. Hemesath recounts Tolton being invited to speak around the country. In a speech to the first Black Catholic Congress in Washington, D.C., in 1889, Tolton offered an optimistic view of the church:

The Catholic church deplores a double slavery — that of mind and that of the body. She endeavors to free us of both. I was a poor slave boy, but the priests of the church did not disdain me. It was through the influence of one of them [Fr. McGirr] that I became what I am tonight. … It was through the direction of a School Sister of Notre Dame, Sister Herlinde, that I learned to interpret the Ten Commandments. …

I was finally admitted to the College de Propaganda Fide, and found out that I was not the only black man there. There were students from Africa, China, Japan, and other parts of the world. The church which knows and makes no distinction in race and color had called them all.

When the church does all of this, is she not a true liberator of the race? In this church we do not have to fight for our rights because we are black. She had colored saints — St. Augustine, St. Benedict the Moor, St. Monica, the mother of St. Augustine. The church is broad and liberal. She is the church of our people.

“Here in Chicago every seminarian receives a picture of Fr. Tolton and a prayer card,” said Perry.

In Columbia, Mo., a regional high school is being built in Tolton’s honor. “Fr. Tolton is an inspiration who overcame tremendous obstacles, stayed true to his faith and worked hard on his academics,” said Kristie Wolfe, the newly appointed principal of Fr. Augustine Tolton Regional Catholic High School.

“When the school doors open in the fall 2011, we will bring Fr. Tolton’s legacy to life in four ways,” said Wolfe. “We will emphasize service to the poor, living one’s faith and overcoming adversity, strong academics, and scholarships for the poor.

“Fr. Tolton was not a prodigy student, but rather through discipline and daily, good habits, became a good student,” she said.

The high school has a challenge grant of $1 million with a goal of $12 million, and has so far raised $10.4 million.

In Chicago, as part of the canonization process, a historical commission has begun its work to review Tolton’s life, virtues and reputation of holiness.

People | Against all odds: from slavery to priesthood to sainthood

Parish reaches out to Nebraska family after deadly alligator attack