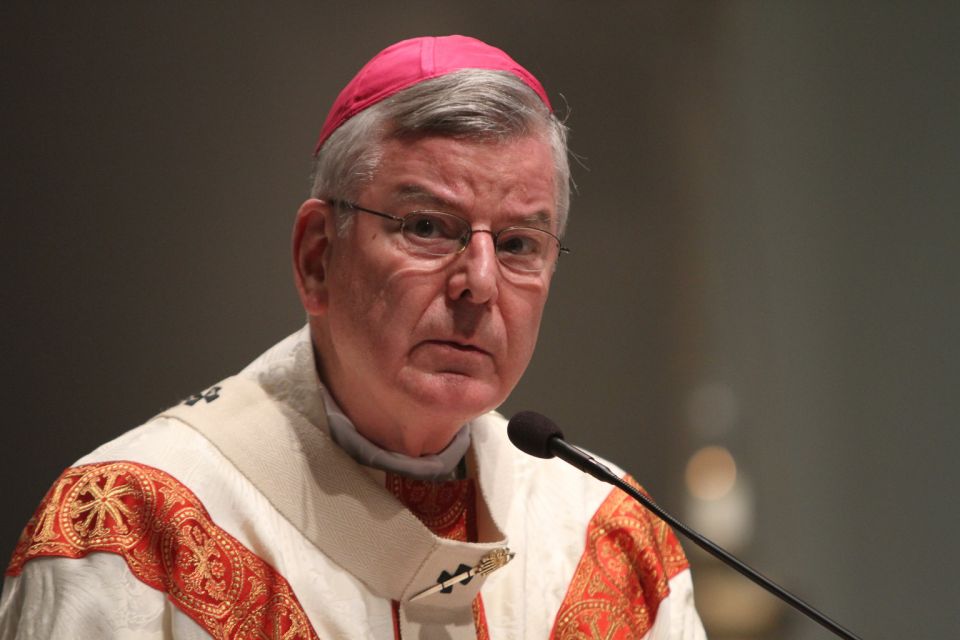 In this 2015 file photo, Archbishop John Nienstedt is seen in the Archdiocese of St. Paul and Minneapolis. The Napa Institute in Irvine, California, announced Aug. 15 that the archbishop, former head of the Minnesota archdiocese, has "stepped aside from his responsibilities" with the institute. (CNS/The Catholic Spirit/Dave Hrbacek)

St. Paul, Minn. — Archbishop Bernard Hebda of St. Paul and Minneapolis said Dec. 14 that until "all open allegations are resolved," his predecessor, Archbishop John Nienstedt, is not free to exercise public ministry in the archdiocese.

Hebda released a letter to the faithful of the archdiocese to clarify the status of the prelate.

The 11-member Archdiocesan Ministerial Review Board, which addresses allegations of clergy misconduct, was consulted and recommended that Hebda publicly clarify that Nienstedt, like any priest facing similar allegations, is not free to engage in public ministry in this archdiocese until pending allegations are resolved. Hebda said he agrees with the recommendation. The restriction took effect Dec. 13.

"While this may cause some pain, my hope is that this decision prompts further action by those with authority over Archbishop Nienstedt to resolve this question," Hebda said in the letter, which also announced new steps the archdiocese is taking to minister to clergy sexual abuse survivors.

The action "is not intended to convey an indication or presumption of guilt," Hebda said.

The clarification of Nienstedt's local public ministry restrictions refers to a 2014 investigation into allegations that he had engaged in sexual misconduct with adults as a priest in Detroit and Rome, and as a bishop of New Ulm. Archdiocesan leaders engaged two separate law firms in the investigation.

Nienstedt, who resigned his position as leader of the Archdiocese St. Paul and Minneapolis in June 2015, has maintained that he is innocent of the allegations.

The investigation was forwarded to the U.S. nunciature but has not been made public.

"As far as I know, any effort by the Vatican to further address the allegations was suspended in June 2015 when Archbishop Nienstedt resigned his office," Hebda said in the letter. "Thus, the matter remains unresolved for the accusers, for Archbishop Nienstedt and for the public. I share the frustration that is felt by them, and believe this situation highlights the need for a better-defined process and independent mechanism to resolve allegations against bishops."

While the 2014 investigation involved allegations of sexual misconduct with adult males, the letter pointed out an allegation against Nienstedt involving minors surfaced only after his resignation.

The allegation was made not to the archdiocese but to the Ramsey County Attorney's Office. It became public in 2016 when the relevant documentation was released by Ramsey County. At that time, Hebda, who has led the archdiocese since Nienstedt's resignation, shared the released materials with the nunciature.

According to the allegation, Nienstedt, as bishop of New Ulm, undressed in front of two teenage boys at a hotel during World Youth Day in Cologne, Germany, in 2005. The three had been caught in a rainstorm, and, according to the allegation, Nienstedt invited the boys to his room, where Nienstedt undressed and then the boys undressed in front of him before putting on hotel robes as they waited for their clothes to dry. The individual said that at the time he felt uncomfortable with the situation, and that he told his mother about it when he returned home because he thought it was inappropriate. According to Hebda's letter, Nienstedt denies the situation occurred.

"My opinion is that this allegation needs to be fully addressed before a definitive resolution of Archbishop Nienstedt's suitability for ministry can be made," he said.

After serving as bishop of New Ulm from 2001-2007, Nienstedt was appointed coadjutor archbishop of St. Paul and Minneapolis in 2007 and became its archbishop in 2008. He resigned in June 2015 after the Ramsey County attorney charged the archdiocese for failing to protect children in the case of former priest Curtis Wehmeyer, who has been convicted of abusing three boys in 2010-11.

When the charges against the archdiocese were dismissed in 2016, the Ramsey County Attorney's Office publicly released documents related to their investigation of the archdiocese. Among them was a summary of a Dec. 29, 2015, interview with an individual who described the World Youth Day situation.

In the letter, Hebda, who has led the archdiocese since Nienstedt's resignation, said he has been repeatedly asked whether there are restrictions on Nienstedt's ministry.

"My answer has always been that although I do not know of any, I am the wrong person to ask: Bishops report to the Holy Father, not to each other. I have no general juridical authority over Archbishop Nienstedt or any other bishop outside the archdiocese," he said. "I can, however, exercise some control over the types of public ministry permitted in this archdiocese," which led him to restrict Nienstedt's local ministry.

Nienstedt has continued to exercise ministry outside of the archdiocese, most recently concelebrating the Dec. 4 funeral of Bishop Robert Morlino of Madison, Wisconsin. From 2016 to 2018, he was a contractor with the California-based Napa Institute. The institute announced Aug. 15 that the archbishop would no longer be serving it.

In a Dec. 14 statement, Nienstedt called Hebda's decision to remove him from ministry "appropriate," given the archdiocese's protocols, "even though I am not currently practicing public ministry in the Archdiocese of St. Paul and Minneapolis."

"I welcome an investigation into this allegation, as I have welcomed all impartial investigations into allegations made against me," he said. "At the same time, I do deny the veracity of this allegation. That being said, I don't want to speak poorly of the men making these accusations."

He continued: "It's also difficult to defend myself because these allegations are of the 'he said, he said' nature. It is my word against the accusers and, as much as they seem to want to discredit me, I don't want to harm them. I am relieved, however, that Archbishop Hebda will be sharing the 2014 archdiocesan investigation to an independent review board. I welcome an impartial look at the facts and the opportunity to defend myself."

In his Dec. 14 letter, Hebda emphasized his strong support for an independent, national lay-led review board to address misconduct allegations against bishops. The structure was one of the items the U.S. bishops discussed but -- at the request of the Holy See -- did not move to vote on during their fall meeting in Baltimore. "In order to fully address bishop accountability, the church needs a national board empowered to act, much as our well-respected Ministerial Review Board has been empowered to address allegations involving our priests and deacons," he said. "The church cannot fulfill its mission without public trust."

Hebda hopes such a structure could definitively address the allegations against Nienstedt. He said he would share the entire 2014 archdiocesan investigation of Nienstedt with such a review board, and that until it is created, he will continue to advocate for it.

"In this way, my hope is that resolution of the allegations against bishops and any additional investigation can be handled in a way that is fair to all and worthy of public trust," he said.

"I share the disappointment of many that more progress has not been made at the national and international levels to address bishop accountability," he continued. "It is my prayer and hope that the February meeting Pope Francis is convening with bishops from around the world produces tangible results.

"We need a review board at the national or regional level ... with the authority and credibility to investigate allegations of misconduct against bishops and make fitness-for-ministry recommendations to the Holy Father."

Hebda released the letter as the archdiocese nears the end of a nearly four-year process of reorganization under Chapter 11 of the U.S. Bankruptcy Code. In January 2015, the archdiocese filed for bankruptcy protection in the wake of mounting claims of clergy sexual abuse dating back as far as the 1940s.

In the letter, Hebda outlined several additional efforts the archdiocese is taking "to change the culture that fostered the clergy abuse crisis," including a new position in the archdiocese's Office of Ministerial Standards and Safe Environment that aims to "ensure that the voice of survivors of clergy sexual abuse will be regularly heard within archdiocesan leadership," he said.

He also reiterated that any survivor who at any time entered into a confidentiality provision with the archdiocese is released from that provision. He also restated his willingness to meet with any survivor who would like to do so.

Hebda also said that plans are underway in the archdiocese for "spiritual outreach" in 2019 that will "include opportunities, both at the parish and archdiocesan levels, for reparation, spiritual renewal and prayers for healing."