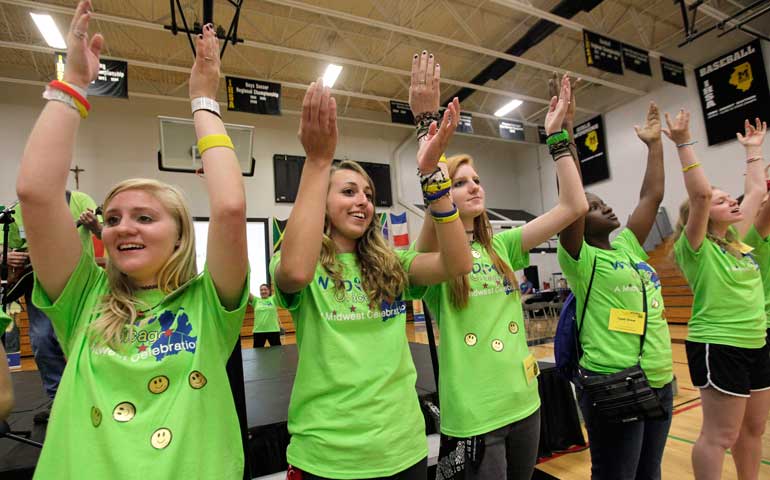 Editor's note: In "Going, going, gone: Books study exodus from religion," Kaya Oakes reviewed two books, including Young Catholic America: Emerging Adults in, Out of, and Gone from the Church, written by Christian Smith, Kyle Longest, Jonathan Hill and Kari Christofferson. Young Catholic America discusses the exodus of young Catholics from the church. The following article is a reply to that book.

Many church leaders want to know what makes today's young Catholics tick. These leaders might want to look at two bodies of social research for help. One includes six books in which we have compared the beliefs and practices of millennial, pre-Second Vatican Council, Vatican II and post-Vatican II Catholics. In the other, Christian Smith and several colleagues have published three books in which they have analyzed the religiosity of Catholic adolescents (ages 13-17) and "emerging adults" (ages 18-23).

Our goal has been to understand continuities and changes in Catholics' beliefs and practices since the mid-1980s. So far, we have drawn national samples of self-identified Catholics (ages 18 and older) in 1987, 1993, 1995, 1999, 2005 and 2011. With this data, we have documented overall trends, and trends among various subgroups, especially different generations.

In our most recent book, American Catholics in Transition, we examine the responses of the 332 millennials in our 2011 survey. We have not examined the beliefs and practices of Catholics under 18, people in other religious groups, or people having no religious affiliation.

Smith's goal has been to understand what happens to the religiosity of young people as they emerge from adolescence and become young adults. To that end, he and his colleagues drew a national sample of 3,290 adolescents, of whom 748 self-identified as Catholics. These adolescents were surveyed at three points in time (2002-2003, 2005, and 2007-2008) and several books were written comparing the religious behavior and attitudes of Protestant and Catholic youth.

The most recent book from Smith's team, Young Catholic America, is based largely on the responses of the 456 young adult Catholics (ages 18-23) who participated in all three waves of that study (62 percent of the Catholics in the original sample). Smith and his team do not examine the beliefs and practices of older adults of any religious affiliation.

It contends that, allowing for some small changes based on the aging process, these historic events foster worldviews that are distinctive to that cohort and last a lifetime. An age approach, on the other hand, stresses the effects of passing through different stages in life. It contends that, allowing for some generational differences rooted in childhood, people's worldviews are subject to change as they age and their life circumstances change.

The two bodies of work also convey two very different understandings of Catholicism. We describe an underlying tension between a compliance-oriented approach that accentuates the authority of the hierarchy and a conscience-oriented approach that emphasizes Catholics' need to follow their conscience, even if doing so means disagreeing with church teachings. This tension is rooted in Catholic theology, tradition and history.

Our work also recognizes that in the Catholic tradition there is a hierarchy of truths. Some beliefs and some practices are more important than others. We have asked Catholics to tell us how much importance they attach to:

Smith's team, on the other hand, assumes that Catholicism is essentially a compliance-oriented religion. From this perspective, conformity is normative; departures from the norm indicate false belief and deviant behavior. Compliance with church teachings is a sign of institutional strength and success; disagreement is an indication of organizational weakness and failure. High levels of religious conformity are signs of religiosity; low levels point to a lack of faith.

Smith and his colleagues examine a wide variety of beliefs and practices, but they pay more attention to religious practices than they do to creedal issues, give more space to sexual and reproductive issues than they do to social justice issues, give their respondents almost no opportunities to indicate how important these matters are to them personally, and treat their various measures of religiosity as if they are of equal importance.

Thus, the researchers make some highly questionable theological assumptions, miss opportunities to see if young Catholics share these assumptions, underestimate young Catholics' understanding of some very basic Catholic issues, overestimate their disagreement with issues that most people consider minor, and, therefore, cannot explain why Catholics who disagree with relatively unimportant church teachings continue to think of themselves as good Catholics and remain in the church.

Our studies show that pre-Vatican II Catholics learned a compliance-oriented approach that emphasized the teaching authority of the clergy, demanded strict adherence to all official church teachings, and often relied on fear and guilt to produce record-high levels of conformity.

Then, as a result of changes in American society and changes in the Catholic church, everything changed. Pre-Vatican II Catholics' best efforts to pass their compliance-centered understanding of the faith on to their children were often mitigated by the cultural revolution of the 1960s and the implementation of Vatican II, both of which fostered a more personal approach to religion.

The three most recent generations learned a more conscience-centered approach that emphasizes Catholics' responsibility for their own faith, including their responsibility to inform their own consciences, and to follow them as much as possible, even if this involves disagreement with church teachings.

These macro-level changes produced generational differences within Catholic families. The largest disjuncture is between pre-Vatican II parents, who remain the most loyal and active generation, and their Vatican II, post-Vatican II and millennial offspring, who have embraced the more individualistic, conscience-oriented understanding of the church.

Members of these younger generations are not just "cafeteria Catholics" who "pick and choose" whatever parts of the faith they like. They continue to embrace core doctrinal teachings such as the divinity of Christ and his real presence in the sacraments; love of neighbor; and concern for the poor. But they are more selective in their religious practices, and are more likely to disagree with teachings that they consider unimportant, optional, coercive or wrong -- especially those related to sexual and reproductive issues.

In our view, a seismic shift has occurred in the church -- a shift from the compliance-based approach of the 1940s and '50s to the conscience-based approach of more recent decades. As a result, young Catholics still think of themselves as Catholic, and they are more religious than many older people realize, but, compared to their pre-Vatican II grandparents, they are more likely to be Catholic on their own terms.

Smith's team draws a very different set of conclusions. What we call a shift from one approach to another, Smith and his colleagues call a story of "decline and loss." Where we see adaptation to changing circumstances, they see the erosion of Catholicism. They tend to see departures from the compliance model of the 1940s and '50s as a downward spiraling of the church. This is especially true in their interpretations of young Catholics' low rates of Mass attendance.

According to Smith and his colleagues, "compared both to official Catholic norms of faithfulness and to other types of Christian teens in the United States [especially young Mormons and young evangelical Protestants], contemporary U.S. Catholic teens are faring rather badly," "show up as fairly weak" and reflect "the relative religious laxity of their parents."

Finding more continuity than change in young Catholics' religiosity as they become young adults, Smith and his colleagues say that the "crucial factor" has been "the inability and sometimes unwillingness of a critical mass of the parents of the Catholic and ex-Catholic emerging adults we studied -- and those half a generation earlier -- to model, teach, and pass on the faith to their children."

In the Smith team's view, the low religiosity scores of young Catholics are traceable to the low levels of religiosity among their parents, who have failed to produce the high levels of compliance found in Protestant sects, the Church of Jesus Christ of Latter-day Saints, and the pre-Vatican II Catholic church.

The two bodies of work have dramatically different implications for church leaders and others who have an interest in Catholicism's future. Smith's work conveys a view of Catholicism as essentially a compliance-based religion in which people are expected to agree with the creeds and code of conduct that have been formulated by religious authorities over time. His books foster an either/or, small-tent view of Catholicism. Either the church re-emphasizes compliance or it will decline even further. Either Catholics abide by church teachings or they are not good Catholics.

Smith's linear assumptions and negative depictions of recent trends in the church, today's young Catholics, and their parents exaggerate the virtues and overlook the risks of compliance, while exaggerating the risks and overlooking the virtues of following one's conscience. They glorify the past and, as other reviewers have noted, offer a grim view of the future.

On the other hand, our work recognizes a historic and ongoing struggle between the church's institutional interest in compliance and its respect for the individual conscience. As in the past, the compliance component sets boundaries and strives for stability; the conscience component encourages adaptation and permits change.

Together, these two approaches foster a both/and, big-tent view of the church as a gathering place where compliance-oriented and conscience-oriented Catholics work out their differences. Our studies also offer a more balanced view of the 1940s and '50s, a more positive profile of today's young Catholics, and a more hopeful view of the future.

[William V. D'Antonio of The Catholic University of America; James D. Davidson of Purdue University; Mary L. Gautier of the Center for Applied Research in the Apostolate; and Katherine Meyer of the National Science Foundation have each co-authored one or more of the six books on surveys of American Catholics going back to 1987.]