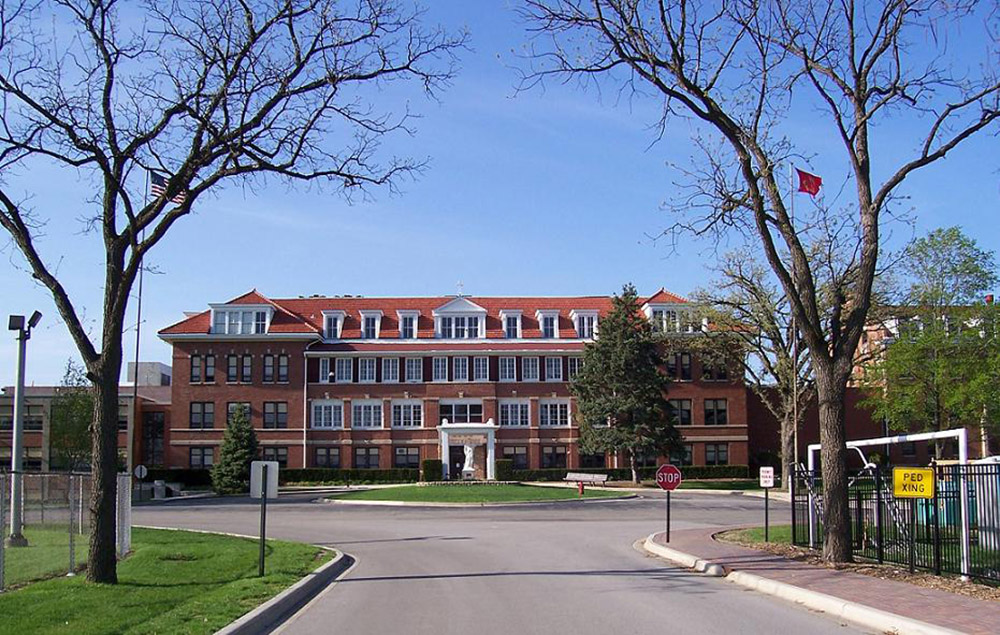 St. Joseph Hall, one of the buildings of Benet Academy in Lisle, Illinois, pictured in a 2008 photo (Wikimedia Commons/Benny the mascot, CC BY-SA 3.0)

A community of Benedictine monks has cut its ties to Benet Academy in Lisle, Illinois, almost four months after the school hired a married gay lacrosse coach over its abbot's objections.

Citing "events in recent months," a Jan. 4 joint statement from the school's chancellor and board chairman said the Benedictine monks of St. Procopius Abbey had discerned that they "no longer have the resources needed for the governance and oversight" of Benet Academy.

The statement did not mention the school board of directors' decision last September to hire Amanda Kammes as the girls' lacrosse head varsity coach amid an outcry from students, faculty and alumni who were angry that the board had previously rescinded a job offer to Kammes because she is married to a woman.

"The Benet community is not dumb. We know why [the monks] are leaving, and I think a lot of people are OK with that," said Justin Smusz, an alumnus who graduated from Benet Academy in 2017.

Smusz, who is gay and helps run a Facebook support group for LGBTQ persons at Benet Academy, told NCR that the monks set the tone for the school's environment, which he described as not having been supportive for gay, lesbian and transgender students.

"I was involved in the music department. That's typically a safe space universally no matter where you are," he said. "However, I experienced in religion classes being told that being homosexual or acting upon homosexual acts is sinful. I experienced my friends being misgendered while I was there, and told to wear the uniform that did not reflect their gender identity."

A spokesman for Benet Academy told NCR in an email that Benedictine Fr. Austin Murphy, the abbot of St. Procopius Abbey who also serves as the school's chancellor, was not taking media interview requests.

In their Jan. 4 statement, Murphy and Dennis Flynn, the chairman of Benet Academy's board of directors, said St. Procopius Abbey will continue its governance role while "alternatives" are studied. They said Benet Academy will continue to operate "with an emphasis on academy excellence and Catholic identity within the Benedictine tradition."

In a subsequent statement posted on the school's website, Stephen Marth, the Benet Academy head of school, wrote of the school leadership's "commitment to ensuring that the Academy will maintain its Catholic identity, in the Benedictine tradition, for years to come."

Marth said "it is expected" that a committee composed of representatives from the Diocese of Joliet, the American Cassinese Congregation of Benedictines, the Benet board of directors, and the school administration "will collaborate on the successful completion" of creating a new governance model for Benet Academy.

When the news broke last September that Benet Academy deferred its employment discussions with Kammes after she listed her wife as an emergency contact, students, parents, alumni and faculty members protested. More than 3,000 people signed a petition urging the school to hire Kammes, an experienced lacrosse coach who is also a Benet alumna.

"Clearly we learned that [the monks] have a disagreement with how the majority of the students and parents felt, since we had such a negative response to their choosing to rescind their offer to Amanda," Smusz said.

Following a meeting of the Benet Academy board of directors, the school announced on Sept. 21, 2021, that Kammes was the right candidate for the job. A week later, Murphy released a statement in which he said he was "deeply troubled" by the school's decision, which he said called "into question its adherence to the doctrines of the Catholic faith."

"The matter raises the question of what a Catholic high school should require from those who work with and form its students. In particular, is it necessary that the witness of their public lives not be in opposition to Catholic moral teaching?" Murphy said.

Francis DeBernardo, the executive director of New Ways Ministry, a national organization that advocates for LGBTQ Catholics, told NCR that St. Procopius Abbey missed an opportunity to learn about LGBTQ persons and their need for civil protections.

"I mean even Pope Francis has said that these couples need legal protections," DeBernardo said, referring to the pope's stated support for civil unions for same-sex couples. DeBernardo also criticized Benet Academy's leadership for the vague language in its recent statement.

"They alluded to the problems of the last few months. Well what were those problems? Was it the hiring of a married lesbian woman? Why are they afraid to say that if they believe that?" DeBernardo said.

"If that's the issue and they believe it's strong enough to sever the ties between the abbey and the school, they should at least be able to say that," he said. "I think they owe that to the parents, the students, the faculty and the administrators."

Smusz, who currently works as an actor in New York City, said the situation over Kammes' hiring sent a message to LGBTQ students and alumni that Benet Academy did not support them. Smusz said he and others have collected stories from LGBTQ alumni and current students, some of whom he said linked their suicide attempts to being told in religion classes that their sexual orientation was akin to bestiality.

"My perspective is that with [the monks'] involvement no longer continuing, I'm hoping that the new leadership is able to create the environment that gay students like myself, when I was there, can feel comfortable in," Smusz said.

A version of this story appeared in the Jan 21-Feb 3, 2022 print issue under the headline: Benedictine monks cut ties to school that hired gay coach.