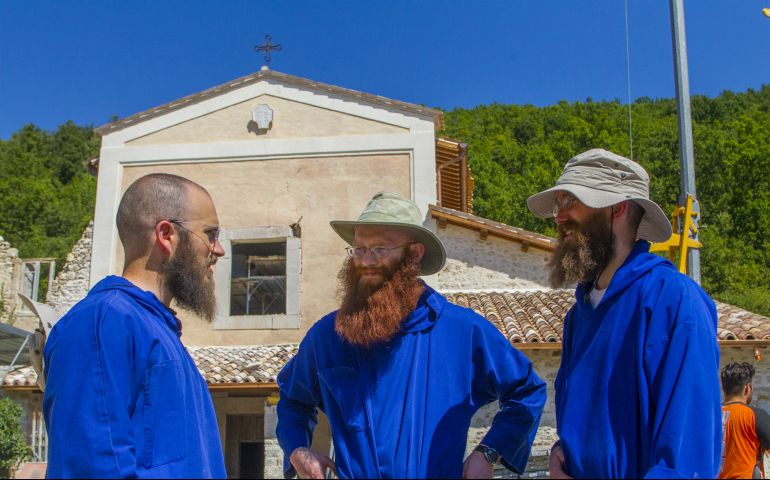 Darien, Conn. — Beer isn't a drink one normally associates with Italy; however, the good monks of Monastero di San Benedetto di Norcia have crafted a magnificent brew which they hope will prove to be popular.

Birra Nursia is a four-year-old craft brewery operated by Benedictines. Every month, they produce 40,000 bottles of traditional blonde and dark beer in batches of 700 bottles in order to ensure a standard of high quality. St. Benedict insisted monasteries strive towards fiscal self-sufficiency through labor which led the monks of Norcia to create their own craft beer.

On Sept. 30, the monks hosted a vernissage -- a reception to highlight its two beers and introduce them to the American market at the Darien Community Center in Darien, Conn.

Birra Nursia's two signature beers, a blond ale and a Belgian strong ale, are brewed on the grounds of the Basilica of St. Benedict located on the traditional birthplace of the twin saints, Benedict and Scholastica. The town is situated in southeastern Umbria in the Valnerina valley beneath the majestic slopes of the Sibylline mountains. The blond beer is light and buoyant -- typical of Belgian light ales. The dark Birra Nursia is more complex with a rich, rustic malty taste.

The Birra Nursia brewery's motto is taken from Psalm 104:15: "ut laetificet cor" (that the heart might be gladdened).

Despite how liberally the beer flowed during the reception, the atmosphere was mellowed considering recent, unexpected events at the monastery.

Norcia is the same town which was devastated by the 6.2 earthquake which hit central Italy on Aug. 24; 298 perished in the disaster. The debut of the beer's release, which was planned many months prior to the earthquake, took on a more somber tone considering the monks no longer have a monastery in which to live. 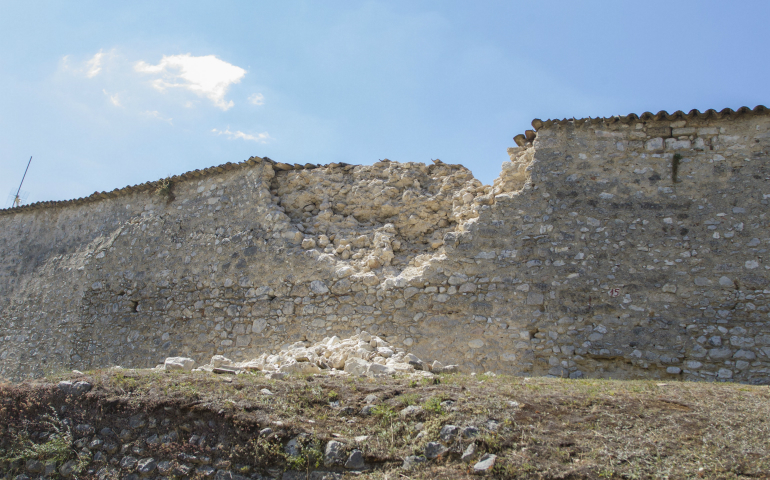 The monks have reserved the Eucharist in the large tent on the monastery grounds far from the danger of falling debris. It serves the local community during Divine Office, daily Mass for locals and the 50,000 annual pilgrims that are expected to visit the monastery.

"We, as many others in Norcia and surrounding areas, suffered a lot of damage to our buildings and especially to our Basilica," explained Fr. Benedict Nivakoff, the monastery's prior and novicemaster. "[It's] very sad to see the many beautiful restorations we've made to St. Benedict's birthplace reduced, in a moment, to disrepair."

"We still offer daily sung Mass in a room adjacent to the crypt," he said. "Given that more than 30 percent of the buildings in Norcia have been condemned, [monks] were transferred to other areas temporarily. Mass is well-attended, and the local people give us much support. The monks in my community are very grateful for the outpouring of love, concern and generosity thus far. The earthquake was only a few weeks ago and sales have been outstanding thus far."

The monks have been very busy in the aftermath of the earthquake.

"The contingent of monks in town has been putting order into the rubble, trying to welcome visitors and be present to local townspeople who are often distraught," Nivakoff said. "The monks in the mountains are working on clearing the property, repairing walls and putting the structures in place to live monastic life normally." 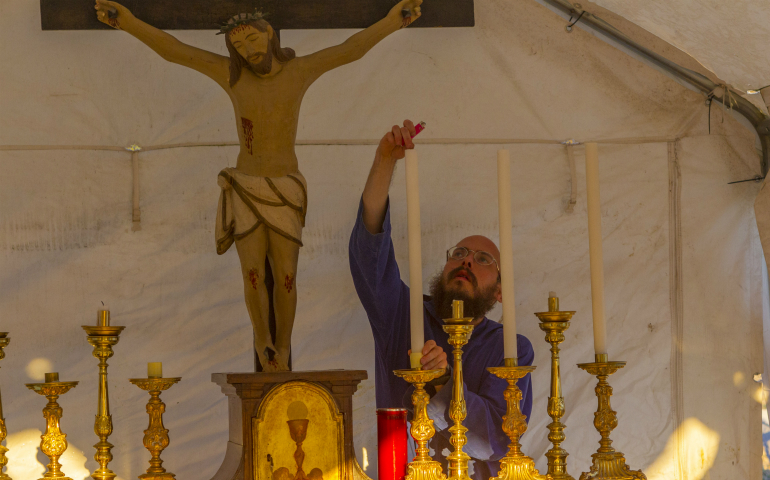 A monk lights the candles in the tent that is now serving as a worship space. (Courtesy of Norcia Community)

In a sign of divine consolation, the community's brewery was preserved from the earthquake's ill effects and is still in operation most likely because of its new earthquake-proof construction.

"The brewery equipment suffered only minor damage," explained Nivakoff. "Apparently, all the [brewery's] fermenters jumped eight inches so the pipes were all bent. Major renovations are required to transfer the brewery to a more suitable location."

In 1998, a group of American Benedictines arrived in Rome. Not being able to find a place to stay, they moved to Norcia on Dec. 2, 2000. The monastery had been closed since 1810.

They renamed the monastery Maria Sedes Sapientiae ("Mary Seat of Wisdom"). It's currently home to 17 monks, four of whom are priests. They have three novices.

Considering their options, the monks settled creating upon a commercial beer to help finance their community. In order to set up their brewery, the Norcia monks conferred with their Trappist confreres at monastic breweries throughout Belgium. The community's first brewmaster is a Texan monk, Br. Francis Davoren. His assistant is Br. Massimiliano Silvati from La Spezia, Liguria.

The first 3,000 bottles produced at the monastery sold out immediately. Birra Nursia even supplied beer to all the cardinals voting in the 2013 papal conclave which elected Pope Francis.

The bottle's label depicts the Basilica of St Benedict's rose window which was subsequently destroyed in the recent earthquake.

Those interested in sampling Norcia beer before purchasing it, can order it at any of Mario Batali's five New York City restaurants. Southern California's Holiday Wine Cellar is the monastery's exclusive U.S. retailer.

[Angelo Stagnaro has published articles in most of the major Catholic journals in the United States and Great Britain and is a correspondent for Catholic News Service.]

Trump and Ryan have 'shared principles'