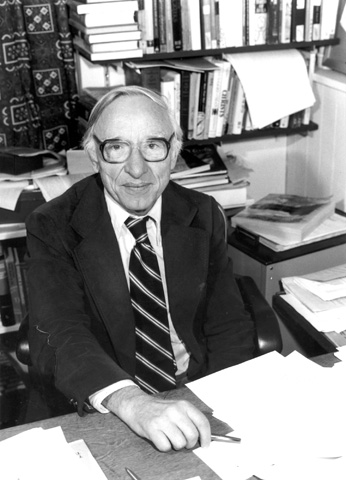 Bernard Cooke, an educator who foresaw the need for well-formed lay theologians, died May 31 in San Antonio. He was 91.

Cooke was on the theology faculty at Marquette University in Milwaukee in 1963, when he established a doctoral program in theology for lay students, the first such program in the United States, according to Marquette's website.

He also earned the admiration of several generations of theology students.

"A woman student in the Boston College ministry program once informed me that the students referred to Cooke, who would take his meals among students, asking them about their lives, struggles and ambitions, as 'the institute's saint,' " Morrill told NCR.

Morrill, who graduated from the College of the Holy Cross in 1981, first met Cooke there in 1980. Morrill remembered Cooke's classes filling up quickly, and his ability to sense a student in distress.

"In grading the reflective papers he regularly assigned, he would read between the lines and, when sensing pain in students, would write in the margin, 'Do you think you'd like to come by and talk?' " Morrill said.

Marybeth Kearns-Barrett graduated from Holy Cross in 1984 and is now a director of the chaplains' office at the college. She also had Cooke in the classroom.

"My memories of being in his class are of him being soft-spoken and gentle. He was able to talk about sacramental theology and the ideas of different theologians with a simplicity and clarity that made everything more accessible," Kearns-Barrett said.

William Roberts, now a professor of religious studies at the University of Dayton, Ohio, was in Cooke's second doctoral class at Marquette, but he first met Cooke in 1941 at the Missouri Province of the Society of Jesus in Florissant.

In a work on Cooke titled A Sacramental Life: A Festschrift Honoring Bernard Cooke, Roberts recalls that he "had a reputation even then for excellence in studies."

The two's relationship would evolve from student-teacher to colleagues to friends, but still Roberts' classroom experiences animated much of his admiration for Cooke.

"As an outstanding and tireless teacher, he influenced the minds and hearts of thousands of students, and through them, countless more," Roberts told NCR.

Cooke was able to "provide insight by inserting quietly into conversation," according to Alice Laffey, an associate professor of religious studies at Holy Cross, and a former colleague of Cooke's.

"He gave students a way of looking at the world," said Laffey, who also remembered Cooke as one "fascinated with history."

Laffey and Morrill noted that history was a primary ingredient in Cooke's success as he understood what worked and what didn't work in times past, and used that understanding to find what lifestyle, teaching methods and sense of justice would work during his era.

"The probing of history -- of practices, polity, and theological methodologies -- was at the heart of his scholarly work, with a deeply traditional yet interpretively particular belief in the biblical origins of Christianity guiding his quests," Morrill said.

Morrill remembered Cooke telling his classes: "You can never read enough history! Nothing is more liberating than knowledge of history!"

Laffey credits Jesuit Fr. Henri-Marie de Lubac as a heavy influence on Cooke's theological development. De Lubac was part of the 20th-century theological movement known as the nouvelle théologie. Cooke connected with the new theology during his time at the Institut Catholique de Paris, where he received his doctorate in sacred theology before the Second Vatican Council (1962-65).

Cooke's primary focus on sacramental theology was "evident in his having published textbooks on the topic at the early, middle and later stages of his career," Morrill said. "His 1976 magnum opus Ministry to Word and Sacraments was really five books in one massive volume and continues to be cited across a range of theological disciplines."

Cooke authored more than 20 books, and he was not afraid to address some of the thorny issues confronting the post-Vatican II Catholicism.

"Cooke sought to advance a reform in the structures of ministry -- especially the priestly ordination of married men and women -- as well as feminism, issues of sexual identity and practices, and marriage," Morrill said.

His willingness to tackle such issues did not go without criticism. Morrill noted that media outlets such as First Things, Catholic World Report and Eternal Word Television Network labeled Cooke as a "dissident theologian" with no regard for the traditions of the church.

Cooke joined the Missouri province of the Jesuits in the 1940s and was ordained a priest in 1952. He received his bachelor's and master's degrees from St. Louis University, and a licentiate in sacred theology from St. Mary's College in St. Mary's, Kan., in 1953, when it was a Jesuit seminary. He left the priesthood in 1969 and married Turner the next year.

According to Laffey, Cooke's primary support came from his wife, who has a doctorate in ministry. "Pauline and Bernard operated as a team ... she, the outgoing extrovert, he, the soft-spoken introvert," Laffey said.

Turner's experiences, especially a trip to Nicaragua, helped Cooke develop "a global consciousness that looked at the poor around the world," Laffey said.

In addition, Turner and Cooke advocated for advancing the role of women in the church and they authored essays supporting women's rights to ordination.

Kearns-Barrett remembers Cooke's support of women: "He was the first person to point out to me in one of my papers that I needed to start using inclusive-language pronouns. I have never forgotten that. A male professor helped me to see that I was failing to include myself and other women in my writing."

Cooke and Turner operated in the world of academia and in the broader society. The two were known for having members of their community over for supper and conversation. Their home "was a place to meet people who had been on the theological scene. ... I was never alone on a weekend," Laffey recalled.

Cooke's ardor for welcoming others in to his home, mentoring students at dinners and reaching out to those around him while walking the halls of universities, was motivated by a belief that understanding and interacting with individuals was a primary ingredient to better understanding God.

"Cooke tried to facilitate conversation subtly, so that others learned from one another and had a chance for an insight of their own," Laffey said.

Morrill recalled Cooke making statements such as "We only know anything about God through people," which was fundamental to Cooke's vision of sacramentality.

Roberts said of Cooke: "As I have often shared with my wife and daughters, except for my father, no man has had as great an impact on me for whom I have become than Bernard Cooke. He is, indeed, a person of brilliant mind, open heart and profound integrity."

[Michael Hannon Tierney is a freelance writer based in Louisville, Ky.]

Editor's note: Bernard Cooke had a long association with the National Catholic Reporter, sometimes writing for the paper and sometimes acting as source for stories. Read more about Cooke's contributions to NCR here: Sacraments, ministry at heart of Cooke's 50 years of work. Sample some of his writing here: The future of Catholic sacramental life (NCR, Nov. 10, 1995) and Renewal of papacy will transform church (NCR, Feb. 24, 1995).