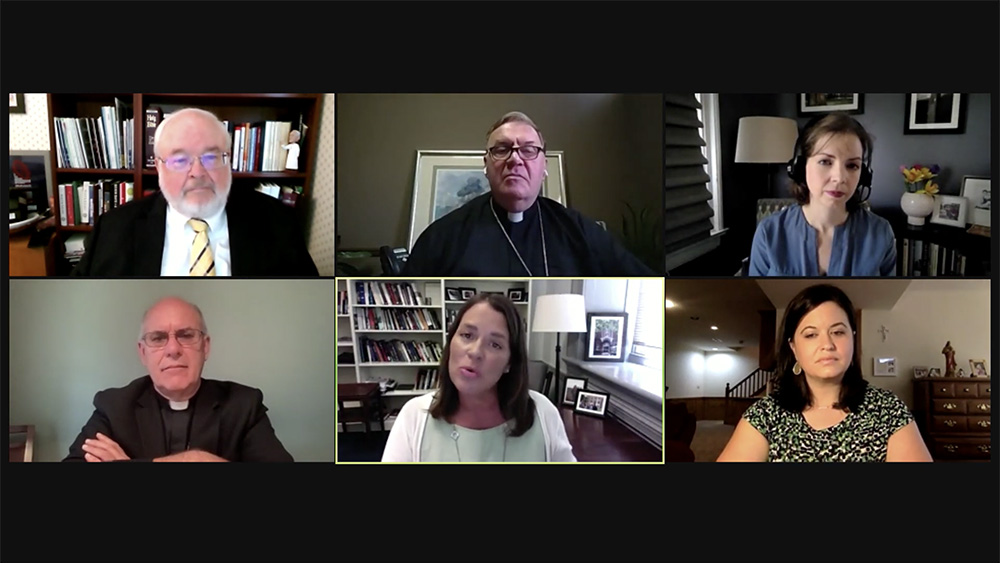 The Catholic prelate charged with overseeing the drafting of a sharply controversial document from the U.S. Conference of Catholic Bishops on "eucharistic consistency" sought on July 28 to downplay concerns that the text would create new national norms prohibiting pro-choice Catholic politicians like President Joe Biden from receiving Communion.

"I've said that many times, that's really beyond the scope of the document," Bishop Kevin Rhoades of Fort Wayne-South Bend, Indiana, chairman of the bishops' doctrine committee, said during an online panel hosted by Georgetown University's Initiative on Catholic Social Thought and Public Life.

Despite months of contentious debate — which has included statements from some conservative bishops openly pushing for norms targeting Biden and House Speaker Nancy Pelosi — Rhoades said the text would be aimed primarily at contributing to a project to revitalize Catholic appreciation of the importance of the Eucharist.

His committee, Rhoades emphasized several times during the 90-minute virtual forum, is charged with drafting a "catechetical-type of document" that the bishops' conference will vote on at its general assembly in November.

"So, we're really looking forward towards a revitalization of our eucharistic identity, and it would be, as it were, a theological foundation for the eucharistic revival project," the bishop said. 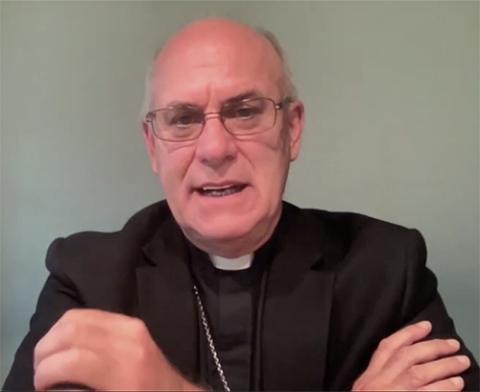 However, Rhoades also told the panel that Los Angeles Archbishop José Gomez, the bishops' conference president, had first approached his committee about a document on the recommendation from a special working group that Gomez formed last November to study the potential conflicts that could arise between church teachings and Biden's administration.

The U.S. bishops voted to go ahead and formally ask Rhoades' committee to draft the document on the Eucharist during the prelates' June 16-18 meeting, held virtually. The bishops voted 168-55, with six abstentions.

Among those who have been most vocal in favor of the coming text are San Francisco Archbishop Salvatore Cordileone, Denver Archbishop Samuel Aquila, Phoenix Bishop Thomas Olmstead, and Kansas City, Kansas, Archbishop Joseph Naumann, chair of the bishops' pro-life committee.

Other bishops have warned that drafting a document against such a heated ideological backdrop ran the risk of politicizing the Eucharist. Those differences of opinion were on stark display during last month's meeting, which featured bishops airing their opposing views during hours of debate via Zoom.

"The divisions that have been revealed by this are surreal," said John Carr, the founder and co-director of the Georgetown initiative, who also previously served as long-time director of the bishops' Office of Justice, Peace, and Human Development.

In May, Cardinal Luis Ladaria, the prefect for the Vatican's Congregation for the Doctrine of the Faith, wrote to the U.S. bishops to urge them to proceed with caution in their discussions. Ladaria advised serene dialogue among the bishops themselves, and between them and the pro-choice Catholic politicians in their jurisdictions.

In a pre-recorded conversation for the July 28 panel, Archbishop Christophe Pierre, the Vatican's ambassador to the U.S., told Kim Daniels, co-director of the Georgetown initiative, that Ladaria's letter aimed to invite the American bishops to work together.

"The church should remain united, take a synodal path, be a living witness to God's path in the world," said Pierre, who added that the starting point in the conversation about the Eucharist could not be about shaming the weak.

"Our church should be the place where people will have the complete possibility to have a personal encounter with Christ," Pierre said. "We need to become a church that goes forth to encounter and accompany the people where they are, and in the imperfect situations where they are."

Cardinal Joseph Tobin of Newark, New Jersey, was among those bishops who expressed reservations last month about drafting the eucharistic document. On July 28, he told the Georgetown panel that the push to draft the document "was born in some confusion," beginning with critical statements made by individual prelates after Biden's election, which was followed soon after by the announcement of the bishops' working group.

At the end of the U.S. bishops' Zoom meeting last November, Tobin said, it was explained that the working group's formation followed a pattern that had supposedly occurred when Donald Trump was elected president four years earlier.

"And some of us recognized that wasn't accurate because there was not a working group established after the election of 2016," Tobin said. "A working group was formed more than a year later to deal with the administration on issues of immigration."

Mollie O'Reilly, editor-at-large at Commonweal magazine, told the panel that the conference's different responses to the elections of Biden and Trump highlighted a "de facto alliance with the GOP" that had resulted from the Catholic hierarchy's "simplistic" approach to abortion politics.

"To me, the 2016 election was almost a farcical illustration of what happens when you do follow that path for long enough that you get to a point where you are saying, 'Catholics need to support the pro-life candidate and the Republican Party even when that means you're telling them to vote to put Donald Trump in charge of the country,' " O'Reilly said.

O'Reilly, who challenged the U.S. bishops' approach in a June 27 piece she wrote for The Atlantic titled "The Real Threat to American Catholicism," said she would have liked to have seen a reckoning in the Catholic community after the 2016 presidential election.

"That was very compromising to the church's witness," O'Reilly said.

Gretchen Crowe, the editorial director at Our Sunday Visitor, which addressed "the bewildering fear of Eucharistic consistency" in an editorial after the bishops' June meeting, offered a different journalistic take on the bishops' decision to draft the document.

"Any time the bishops take a clear stand on what the church teaches, particularly around the Eucharist, I think it can help in terms of catechesis, which is one of the reasons why we support this document," said Crowe, who suggested that Catholics in the pews are looking to the bishops to be pastors.

"They're looking to them with the expectation of spiritual and moral leadership in this time and there's nothing more basic than the church's teaching on the Eucharist and no better way than bishops can be our leaders, pastors, to help communicate what the church teaches on the Eucharist," Crowe said.

Despite the fact that some conservative bishops during last month's meeting mentioned Biden and Pelosi by name when arguing for the need of a document on eucharistic consistency, Rhoades told the July 28 panel that the document will be addressed "to all Catholics, not a particular person or a single issue."

Said Rhoades: "We can work on some of the document kind of preliminarily but on some of these more sensitive issues, under eucharistic consistency, I think we are really going to wait until we hear back from the regional meetings," which have a deadline at the end of August, he said.

[Brian Fraga is a Catholic journalist based in Southeastern Massachusetts.]