Motion to draft document passes by 75% of the bishops' conference 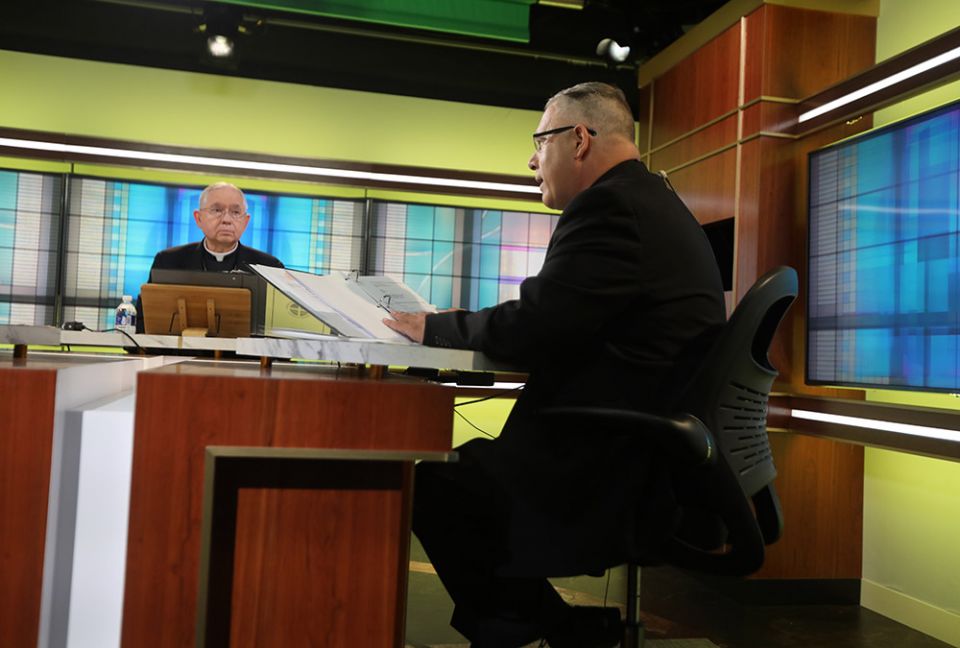 Los Angeles Archbishop José Gomez, president of the U.S. Conference of Catholic Bishops, looks on as Msgr. Jeffrey D. Burrill, the conference's general secretary, reads a message to Pope Francis June 16 at the conference headquarters in Washington during the opening of the bishops' three-day virtual spring meeting. (CNS/Bob Roller)

In a vote that was both expected and defiant, the U.S. Catholic bishops advanced on June 18 plans to draft a document addressing Communion for pro-choice Catholic politicians, delivering an extraordinary rebuke to the Vatican's attempts to slow the process and avoid attempts to co-opt the church's sacraments for partisan aims.

The motion passed overwhelmingly by a vote of 168-55 with six abstentions, or nearly 75% of the body of bishops, easily achieving the simple majority it needed to move forward. The bishops voted on the measure on June 17, although the results were not announced until the final day of their virtual spring assembly.

The green light for the document is the culmination of efforts that began last November, days after the election of President Joe Biden. At the time, the U.S. bishops' conference announced the formation of a formal working group to discuss "problems" raised by having the nation's second Catholic president who supports abortion rights.

Despite an intervention from the Vatican's doctrinal office last month urging "extensive and serene dialogue" on the matter and outlining a process of consultation among the bishops themselves, with Catholic politicians who disagree on matters of church teaching and with other episcopal conferences, the U.S. bishops voted to advance the drafting of a document after two hours of virtual debate where more than 40 bishops spoke for and against the measure.

John Carr, who worked as top policy adviser for the bishops' conference for a quarter of a century, said the debate over the document "demonstrated serious division among the bishops and the current proposal and process."

"A quarter of the bishops are unsatisfied with the process, uncomfortable with the approach and context, and opposed to some of the proposed content," he told NCR. "A significant number of bishops said this effort has already led to serious ecclesial divisions, pastoral costs and public damage to the church and a different, more pastoral approach is required.

"In my experience, it is unprecedented for the conference to simply push forward when so many bishops are opposed," Carr added, saying a key question is what the leadership of the bishops' conference took away from the debate and whether they will "seek an approach that includes more dialogue, greater engagement and less judgment."

The bishops' Committee on Doctrine, currently headed by Bishop Kevin Rhoades of Fort Wayne-South Bend, Indiana, will now begin work on the full text of the document ahead of the U.S. bishops' general assembly in November.

The document, which the Vatican has already cautioned needed more time for dialogue and episcopal unity, will require the support of two-thirds majority of bishops and the Vatican's approval, known as a recognitio.

During the last seven months, the U.S. bishops have been in a state of open discord, both among themselves and with the Vatican, in regards to their approach to Biden.

By contrast, the Vatican marked the occasion with a customary telegram to Biden congratulating him and urging him to pursue policies "marked by authentic justice and freedom." While some bishops praised Gomez's elevated focus on abortion in his statement, other prelates labeled the statement as "ill-considered."

In February, after the 10-person working group on Biden was disbanded, the Doctrine Committee began initial work on a document on "eucharistic coherence." In recent months, a number of conservative Catholic prelates have fueled the public discussion of the document by releasing their own pastoral letters on the Eucharist and pushing on fringe right-wing websites for the conference to advance a document banning pro-choice Catholic politicians from the Eucharist. Other bishops have published essays warning against the "weaponization of the Eucharist" for political purposes.

Following the Vatican's efforts to intervene last month, nearly 70 bishops sent a private letter to Gomez asking to delay the vote until the bishops could meet in person to discuss the highly sensitive and divisive matter. The letter was later leaked and Gomez announced the vote would remain on the agenda.

Throughout the three-day meeting, a number of bishops insisted the document was directed toward neither a particular person or political party. Those claims, however, were repeatedly undermined by other bishops, including bishops' conference committee heads, citing both Biden and Speaker of the House Nancy Pelosi's Catholicism as to why they believed the document is needed now.

Carr said he believed some bishops may have been reassured by commitments by Rhoades that the proposed statement "will not include policy or guidance on denying Communion to the president or other public officials, but rather will be a broader teaching document."

"In response to the debate, it seems that the future statement is expanding in scope and shrinking in specific application to public officials," he said.

After three days of virtual debate, where phrases such as "Can you hear me?" and "Am I muted?" frequently peppered the discussion, the bishops will convene in person in Baltimore this November for their first in-person gathering in two years.

A version of this story appeared in the July 9-22, 2021 print issue under the headline: Bishops to draft Communion document .

People | In defiance of Vatican, US bishops vote to advance Communion document