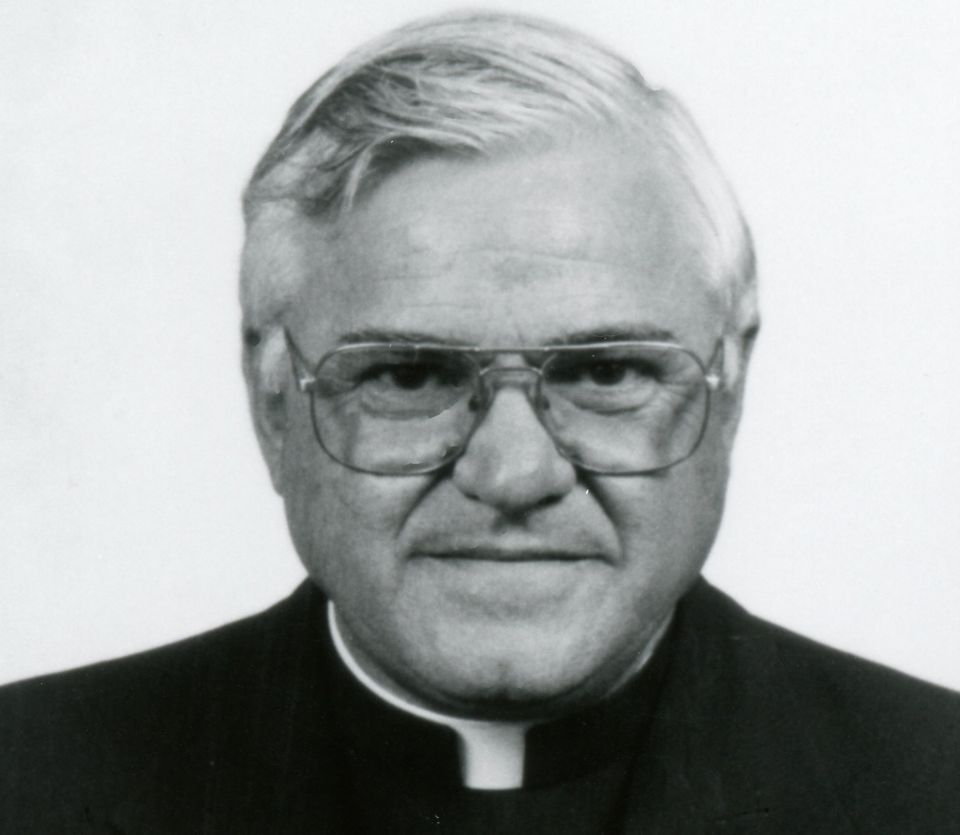 Bishop Anthony Milone, who died May 17 in Omaha, Neb., is pictured in an undated photo, He was 85. Auxiliary bishop in the Archdiocese of Omaha from 1982 to 1987, Bishop Milone headed the Diocese of Great Falls-Billings in Montana from 1988 to 2006. (CNS)

Omaha, Neb. — A simple, good-humored and humble shepherd, Bishop Anthony Milone, who was an auxiliary bishop in the Omaha Archdiocese from 1982 to 1987 and head of the Diocese of Great Falls-Billings, Montana, from 1988 to 2006, died May 17 in Omaha. He was 85.

Milone's body was to be received at St. Cecilia Cathedral in Omaha the afternoon of May 23 by Archbishop George Lucas, who was to preside over prayers for the dead from the Liturgy of the Hours in the evening.

Various apostolates and organizations in the archdiocese planned to lead hourly prayer vigils until midnight.

A funeral Mass was planned for May 24 at the cathedral with Bishop Michael Warfel of Great Falls-Billings as celebrant, followed by entombment at Calvary Cemetery in Omaha, with retired Omaha Archbishop Elden Curtiss presiding.

"Bishop Milone gave me a warm welcome when I came to Omaha nine years ago," said Lucas. "I will miss him, and I join his many friends, his family and his former parishioners in thanking God for his long and faithful ministry."

"He was always a pastor, concerned about the welfare of the people, spiritual and otherwise," said Fr. Harold Buse, pastor of St. Bernadette Parish in Bellevue, Nebraska, where the bishop lived during a portion of his retirement, maintaining a regular schedule of weekday and weekend Masses until his move to the St. John Vianney Residence.

During his final weeks, in hospice care, Milone's thoughts continued to be with the people, telling Buse during a recent visit: "Tell the people to pray when they're well, because when you're sick it's harder to pray, and thank the people for their continued prayers."

Buse, who served with Milone when the bishop was pastor of St. Bernadette, said he connected well with people of all ages. "He was a simple, humble priest and bishop, and willingly sacrificed for the people of God throughout his life," he told the Catholic Voice, Omaha's archdiocesan newspaper.

A native of Omaha, Milone grew up in St. Philomena (now St. Frances Cabrini) Parish and attended Creighton Preparatory School, both in Omaha. He attended Conception Seminary in Conception, Missouri, and Pontifical Gregorian University in Rome.

He was ordained a priest in 1957 and served as assistant pastor and pastor of several parishes around the archdiocese, including as pastor of St. Bernadette Parish in Bellevue. He lived and continued to serve there in his retirement, celebrating Mass at the parish and confirmations in the archdiocese.

He was ordained a bishop in Rome by St. John Paul II in 1981 and was assigned as an auxiliary bishop to assist the late Archbishop Daniel Sheehan, who was experiencing health issues at the time.

"Bishop Milone was very much beloved, especially in the rural areas as people got to know him, Gutgsell said. "He was a good pastor and bishop."

In 1987, Milone was named the sixth bishop of the Great Falls-Billings Diocese, and was installed in 1988 to lead nearly 58,000 faithful in 66 parishes, 44 missions and five Native American reservations, throughout an area spanning nearly 95,000 square miles.

His retirement in 2006 was prompted by health issues that made traveling throughout such a large geographic area difficult.

"My biggest satisfaction was getting out to the parishes and being with all the wonderful people," Milone told the Catholic Voice in 2006. "One of the painful things is to not be able to travel around the diocese to see the people."

Milone led the Montana diocese during a time of transition, said Fr. Jay Peterson, who was appointed vicar general by Milone in 1998.

"We had to make a lot of hard decisions in terms of merging and closing some parishes, not only for financial reasons, but also because of dwindling population, especially in the agricultural areas," he said.

To address these issues, Milone led the implementation of a strategic planning process actively involving the laity, including development of a 167-page report titled "One Vine … Many Branches."

It summarized the state of the diocese and addressed challenges such as a shortage of priests and viability of parishes. It also made recommendations for improvements to youth ministry, vocations promotion, education, religious formation and evangelization.

A mission statement and five-year plan were developed, and although not all recommendations proved practical, the process led to greater lay involvement in parish life and improvements in several priority areas.

"He was a very gentle, kindly man, and a good listener, and was really well liked because of his personality," Father Peterson said. "He also was very supportive of his pastors, he didn't interfere, and was very encouraging and positive."

Warfel, who succeeded Milone in Great Falls-Billings, said he left the diocese in good order when he retired and kept in touch, occasionally returning for priest retreats and helping with confirmations.

"We talked regularly, and I kept him up to date on happenings, but he never wanted to interfere and was very respectful and sensitive to the importance of allowing the new person to implement whatever programs he wanted," Warfel said.

At the national level, Milone was a member of the Administrative Board of the U.S. Conference of Catholic Bishops and the bishops' Subcommittee on Native American Affairs. He also was director of the bishops' Pastoral Plan for Pro-life Activities for the Omaha Archdiocese and was co-chaplain of the Newman Club at Wayne State College in Nebraska.

A humble man with a self-effacing sense of humor, Milone "never put himself out front to seek attention," Gutgsell said. "He was always mindful of who he was and mindful of the people. I think that's what made him a good pastor and a good bishop."