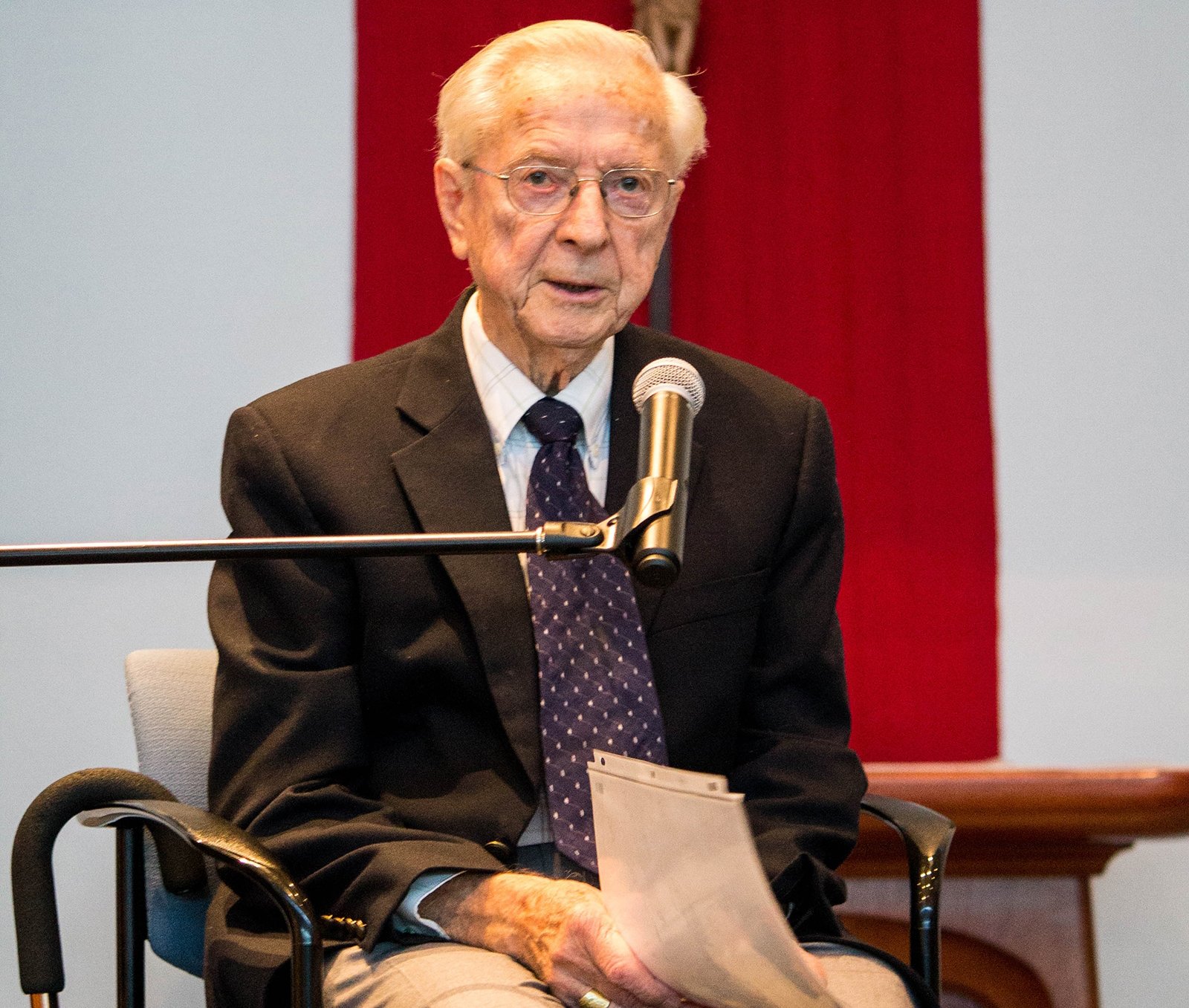 The retired bishop of Victoria is remembered as a longtime proponent of social justice issues and an outspoken advocate of subjects — from the celibate priesthood to unbridled capitalism — that could make popes and prime ministers uncomfortable.

When he retired in 1999 at the age of 75, Bishop De Roo was Canada's longest-serving bishop, having shepherded Victoria since 1962.

In 2010, The Vancouver Sun named Bishop De Roo British Columbia's fourth most-influential spiritual leader of the century. It cited his provoking a national debate in 1984 "when he accused Pierre Trudeau of exacerbating the 'moral crisis" of unemployment" and for "encouraging his diocese's 70,000 Catholics to experiment in worship styles and enhance the role of women."

Vancouver Archbishop J. Michael Miller said Bishop De Roo "will long be remembered as one of the fathers of the Second Vatican Council, an ecclesial event that was a great grace for the church."

Victoria Bishop Gary Gordon said Bishop De Roo "was able to bring the firsthand experience of Vatican II into the lived experience of our diocese and continued in ministry up until well into his 90s."

Bishop Gordon said one of the enduring gifts the late bishop brought to the diocese and the church in Canada was his passion for promoting "the council's desire for the church to grow into the fullness of the people of God in dialogue with the world, especially in the realm of the social teachings of the church."

Born in 1924 in the farming community of Swan Lake, Manitoba, Bishop De Roo was the second of eight children, with a sister who was an Ursuline nun and a younger brother who was a priest. He studied for the priesthood at St. Boniface Seminary in Manitoba and was ordained June 8, 1950.

After ordination, Father De Roo went to Rome for further studies and received his doctorate in sacred theology from the Angelicum University in 1952. He served as a pastor in Victoria, where he was a priest-consultor and secretary for the Manitoba bishops' conference.

Bishop De Roo had a dramatic arrival in the diocese with a solemn tribal ceremony reenacting the arrival of Bishop Modeste Demers, the first bishop of Victoria, 117 years earlier. A B.C. Catholic newspaper recounted how the new bishop arrived by canoe at the Tsawout Reserve near Victoria and was greeted by 11 war canoes that escorted him to the shore.

There he was made an honorary chief and bestowed with the name Siem Le Pleet Schoo-Kun, roughly translated as "High Priest Swan" and a reference to a Coast Indian tradition of launching canoes and heading out to sea in spring at the sight of the first swan seen flying overhead.

One of the early tasks Bishop De Roo set for himself was to visit as many of the Indigenous people of his diocese as possible, and he maintained a close relationship with them for the rest of his life.

He attended sessions of the Second Vatican Council in Rome, where he and other Canadian bishops criticized a proposed document on the lay apostolate in the modern world, saying it failed to set forth the essential principles of the movement.

After returning from the council, his enthusiasm for embracing progressive ideas quickly took root in Victoria, where he told a lay apostolate workshop that new pastoral patterns were needed in the church, with the laity planning, organizing and carrying out programs with the spiritual guidance of priests and in cooperation with the hierarchy.

He spoke of his frustration over what he saw as entrenched attitudes among the laity that blocked efforts to breathe life into Vatican II's documents. He cited, for example, the faithful's tendency to look to clergy for answers to all moral and religious questions. He also complained of bishops who were "far too engrossed in administration" and too little concerned with pastoral problems. He was also a promoter of the permanent diaconate and the role of the laity as being "more than a secondary one of assistance to the clergy."

In 1968, he made a presentation to a federal committee considering abortion law reforms and called on the committee to show "respect for life. We are much concerned that a too-open health clause may result in widespread disrespect for and assault on the life of the unborn child."

In 1999, months after Bishop De Roo retired, the Vatican instructed him not to speak at a conference of married Catholic priests.

Bishop Raymond Roussin, who replaced Bishop De Roo in Victoria, discovered that a number of poor investments made under Bishop De Roo's administration had left the diocese $17 million in debt. The diocesan financial crisis resulted in the sale of millions of dollars in diocesan assets and the launch of a bond drive to borrow money from parishioners.

Bishop De Roo issued a public apology, taking full responsibility for the series of poor investment decisions made over a period of years during the 1980s and '90s. A three-person inquiry appointed by Bishop Roussin found Bishop De Roo had broken canon law in the handling of funds.