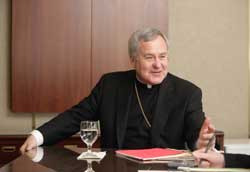 Bishop Robert J. Carlson of Saginaw, Mich., has been appointed as the new archbishop of St. Louis.

He succeeds Archbishop Raymond L. Burke, who was named prefect of the Supreme Court of the Apostolic Signature at the Vatican last June. The date of his installation in St. Louis was still to be announced.

Bishop Robert J. Hermann, a St. Louis auxiliary who is archdiocesan administrator, called Archbishop Carlson "a very energetic, articulate, warm and gifted pastor and administrator. He thinks and works with the church he loves, and will continue to build upon the legacy of his predecessors here in St. Louis."

Carlson was born June 30, 1944, in Minneapolis. He pursued seminary studies at St. Paul Seminary in St. Paul, Minn., where he earned a bachelor's degree in philosophy and a master of divinity degree in religious education. He was ordained a priest for the Archdiocese of St. Paul and Minneapolis in 1970. In 1979, he earned a licentiate in canon law from The Catholic University of America in Washington.

He was ordained an auxiliary bishop of St. Paul and Minneapolis in 1983. In 1994, he was named coadjutor of the Diocese of Sioux Falls, S.D., and in 1995 became head of the diocese. In 2004 he was named bishop of Saginaw.

While he was in Sioux Falls Carlson made national news in April 2003 when The Weekly Standard, a conservative magazine in Washington, reported that he had written then-Sen. Tom Daschle a letter asking the South Dakota Democrat to quit identifying himself as Catholic because of his position on abortion.

Daschle refused to discuss any details of his communications with the bishop, saying, “I am not going to participate in a debate that is intended to politicize anyone’s religious beliefs, especially during Holy Week. ... I will not discuss our private conversations in the media.”

He did say that he had had “the benefit of Bishop Carlson’s guidance on many public and private issues” and added that that relationship would continue.

Carlson said in a statement that he had talked to Daschle about his position on abortion and urged the senator to reconsider his pro-choice position.

Carlson’s position on pro-choice politicians is of special interest because Burke, his predecessor in St. Louis, has been an outspoken advocate of denying Communion to Catholic politicians who persist in supporting legalized abortion.

In Saginaw Carlson has developed a reputation as a good preacher with a consultative style of governance, a deep concern for the poor and a tremendous ability to promote priestly vocations.

Bishop Hermann noted that during Carlson’s his five years in Saginaw he increased the number of seminarians from two to 18.

“He’s a very warm man,” said Jeremy Priest, a pastoral associate for the past two years at St. Mary University Parish in Mount Pleasant, which serves the faculty, staff and students of Central Michigan University.

Priest said Carlson has visited the university parish five or six times in the past couple of years “and his preaching has been very well received by everybody.”

“He’s a good communicator. You know where you are with him,” he added.

Father James Carlson, pastor of St. John Vianney Parish in Saginaw -- no relation to the new archbishop -- said that when Carlson came to Saginaw, “he had very large shoes to fill, following someone so loved” as his predecessor, Bishop Kenneth Untener.

Father Carlson described his bishop of the past four years as “friendly, warm and listening. His style was a very different style. I think he was much more formal than Bishop Untener was -- but that’s OK.”

The pastor, a member of the diocesan priests’ council for most of the past four years, described the new archbishop as “quite consultative.”

“He had, he would say himself, he had an idea a minute, and some of those would happen without us knowing about it. He wrote a series of pastoral letters in the past year which all came as a surprise -- all very good, but they all came as a surprise. But on major areas (of decision-making) he was good, he was consultative,” the priest said.

While in Saginaw, Archbishop Carlson co-founded, with a Colombian priest, a religious order in Colombia, Messengers of Peace, that is devoted to prayer for peace and service to the poor.

In the introduction to his Pastoral Letter on Peace last December the Saginaw bishop wrote, “In 2002 the Lord spoke to my heart: ‘So many desire peace, but few are willing to pray for peace.’ In giving me this word, the Lord gave me a vision and a goal: to help the world come to peace through the power of prayer.”

He said that was the vision behind the founding of the Messengers of Peace.

In the letter he urged Catholics to commit themselves to peace, starting with prayer. “I believe that every person can help bring peace to the world,” he wrote. “If you regularly place yourself in the presence of Christ, especially in the Blessed Sacrament, peace will first come to your own heart. If peace takes possession of your heart, it can spread through you to your family” and eventually to the wider community.

Father Carlson said the founding of the religious order in Colombia “is part of his love for the poor.”

He described Saginaw as “a dying car-industry town, with a lot of poverty and violence, a lot of gangs” and said the bishop was “very focused on trying to get the civic leaders and the ecumenical church leaders, especially the black community’s ministers, together to see what we could do together to make a difference there.”

He used the words “incredible” and “phenomenal” to describe the new archbishop’s ability to attract priestly vocations “I know he’s got a national reputation for that, and it’s well deserved,” he said.

He estimated that the diocese currently has about 75 active priests and that about 20 percent of the parishes are run by administrators who are not priests. Of the 18 men Saginaw currently has in the seminary, three are to be ordained to the priesthood this June.