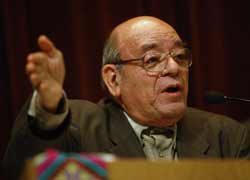 MEXICO CITY -- Retired Bishop Samuel Ruiz Garcia, known as the champion of the poor and indigenous in southern Mexico, died Jan. 24 of complications from long-standing illnesses. He was 86.

The bishop headed the Diocese of San Cristobal de Las Casas from 1960 to 2000, and from 1994 to 1998 mediated a commission looking for an end to the conflict between the Mexican government and the indigenous Zapatista National Liberation Army in Chiapas state.

For his work with the state's indigenous population he received death threats and, in 2002, was the recipient of the Niwano Peace Prize for his work "raising the social standing of the indigenous communities of Mexico" and for his work toward "the reclamation and preservation of their native cultures."

"Don Samuel was like the prophet Jeremiah, a man who lived and experienced contradiction," said Bishop Raul Vera Lopez of Saltillo, who served as Bishop Ruiz's coadjutor from 1995 to 1999.

Vera, celebrant at a Jan. 24 Mass for Bishop Ruiz in Mexico City, described Bishop Ruiz as "a person whose actions were discussed and condemned by a section of society, but for the poor and for those who worked with him, Don Samuel was a bright light, who fulfilled what God told the prophet: 'This day I set you over nations and over kingdoms, to root up to destroy tear down ... to build and to plant.'"

Politicians, prominent journalists and even a group of campesinos (peasant farmers) wielding machetes emblazoned with Bishop Ruiz's name attended the Mass in Mexico City. A funeral Mass was to be celebrated Jan. 26 in Tuxtla Gutierrez, with the papal nuncio, Archbishop Christophe Pierre, presiding.

News of Bishop Ruiz's death made nationwide headlines because he was well-known for his human rights advocacy and mediation work in Chiapas. He most recently participated in a commission serving as a channel between the rebel People's Revolutionary Army and the Interior Ministry over the issue of forced disappearances.

"Samuel Ruiz strove to build a more just Mexico -- egalitarian, dignified and without discrimination in it -- so that indigenous communities have a voice and their rights and freedoms are respected by all," the president said in a statement.

U.S. Secretary of State Hillary Clinton, visiting Mexico Jan. 24, said of Ruiz, "My colleagues say he was a tireless mediator that searched for reconciliation and justice through dialogue, and that is exactly the legacy we must honor and the example we all must follow."

Ruiz had suffered from arterial hypertension and diabetes for a decade and had obstructed arteries, some cerebral damage and difficulty moving his body. The severity of his illness led to his transfer Jan. 12 to a Mexico City hospital from one in the state of Queretaro, a member of his medical team told CNN.

"He was a bishop from a nowhere place, but it became known ... and became the center of an awful lot of what was happening in Latin America," Quigley said.

In the 1960s, Ruiz began speaking out against Chiapas' unwritten laws -- such as those prohibiting Indians from walking the streets after dark and -- even into the early 1970s -- forcing them to step off city sidewalks into the gutter whenever non-Indians approached.

"Don Samuel arrived in a Chiapas plagued by injustices and abuses against indigenous peoples and the poor," Vera said.

"He saw with his own eyes the backs of indigenous men marked by the whips of plantation owners," who paid "three cents a day" and forced workers to purchase from company stores with inflated prices, Vera continued.

"He also knew female indigenous subjected to 'law of the first night,'" in which the bosses take the virginity of young women in their employ, Bishop Vera said.

Ruiz said his faith led him to examine the roots of the injustice and prompted his writings on the exploitation of native Americans and his research into indigenous cosmology and theology. However, his remarks against the powerful landlord class were construed by some -- including some at the Vatican -- as originating in Marxist class theory, rather than the Gospel.

During Pope John Paul II's 1990 visit to Mexico, landowners published an open letter, accusing Ruiz of being a communist and fomenting class hatred.

Ruiz learned to speak four Mayan languages and often traveled by mule through his diocese, where he was affectionately called Don Samuel or "Tata," which means father in a Mayan language.

Samuel Ruiz Garcia was born Nov. 3, 1924, in Irapuato, Mexico. He was ordained a priest in 1949 after studies at the Pontifical Gregorian University in Rome. He served as a seminary rector in Leon, Mexico, and was consecrated a bishop in 1960.

On his 75th birthday, he told nearly 2,000 people who packed the diocesan cathedral that he was grateful to God for being allowed to serve the diocese for nearly 40 years and he had learned much from the indigenous people.

"I can tell you that I am the same person, but that I am not the same," he said. "The bishop that arrived here has been left behind, has evolved."

Loving the world, one face at a time

Bishop McElroy: US and Vatican can work together on vaccine distribution