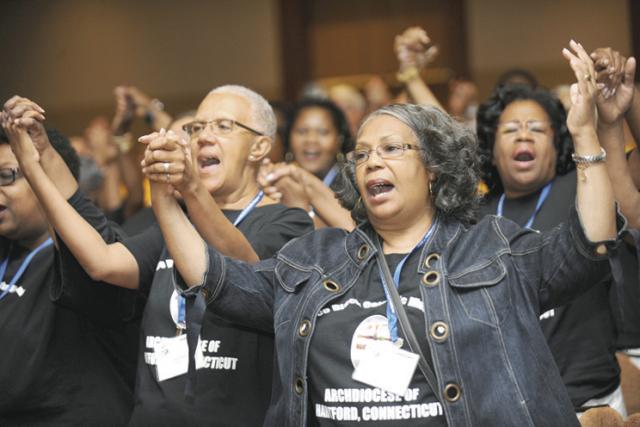 Leaders of the African-American Catholic community are developing a five-year pastoral plan that will emphasize evangelization within their community. The plan is built on current research that found black Catholics are highly engaged in their faith life and on the leaders' experience of black Catholics leaving the church.

If God gave an 11th commandment, he said, it very likely could be, "Thou shall not be a bystander."

The congress, held every five years in a different location each time, constructs a pastoral plan to guide the black Catholic community for the next five years. Themes emerging from this year's plan, which is currently in draft form and will be released in its finalized form in a month, were "very much" affected by a 2011 study, said Bishop John H. Ricard, a retired bishop on the board of the congress.

The Notre Dame study was the first ever to focus specifically on African-American Catholics -- who number about 3 million -- in enough numbers to draw statistically reliable national information on their views, attitudes, religious engagement and demographic characteristics, the researchers told NCR earlier this year.

The study found that black Catholics are more religiously engaged than white Catholic and white Protestants, and that cultural norms rather than religious norms account for the high religious engagement in black Catholics and black Protestants. Black Catholics tend to attend Mass more regularly and be more satisfied with parish life, and those who attend a predominantly black parish -- about a fourth of black Catholics -- are even more engaged.

Traditional church teaching and "day of reflection" meetings -- held in dioceses prior to the congress where black Catholics reflected on spiritual and pastoral needs -- also heavily influenced the plan.

Dominican Fr. Reginald Whitt, a law professor at the University of St. Thomas in St. Paul, Minn., gave the opening address at the congress.

He reflected on the re-emergence of a distinctly black Catholic identity following the Second Vatican Council, especially with the U.S. black bishops issuing in 1984 the pastoral letter "What We Have Seen and Heard," which showed that black Catholics "had come of age in the church."

"We were authentically black," Whitt said. "We were truly Catholic. And, hence, we were called to evangelization. Thus began the current era of the Black Catholic Congress."

Whitt also reflected on the fact that black Catholics are a small minority within the larger black community in the U.S., making up approximately 5 percent of the black population.

Even so, black Catholics still put an emphasis on evangelizing. That was one of the themes of this year's pastoral plan, Ricard said. He also noted that the turnout for the congress this year, including a number of young people, was a bit higher than the standard 2,000 attendees other years.

Outreach to youth was another theme in the pastoral plan draft. At the congress, the young people wrote a youth pastoral plan during one of the general sessions. "We are excited about this new initiative because we need to keep the youth engaged in the church and community," congress executive director Valerie Washington said.

Other areas of focus in the draft were parish registration and closures, Catholic schools, marriage, deeper understanding of faith, solidarity with immigrants, and promoting vocations.

In light of the news of four black Catholic candidates for sainthood, the draft urges Catholics to promote the knowledge and veneration of black saints as well as promoting pilgrimages in their honor.

Encouragement for greater involvement from black Catholics in pro-life issues, including violent crime and abortion, is a theme. "We lamented the fact that so many of the abortions, one-third of the abortions in this country, are perpetrated against African-American women, although they are only 12 percent of the population," Ricard said.

Social issues also take priority in the plan. Historically, the church has championed the rights of the poor, the dispossessed and minorities, an aspect that Catholics recognize, Ricard said. The draft encourages "the church to continue to be involved with issues relating to our social justice needs," he said, especially adequate housing, decent wage, family support, employment, and health care for everyone.

Each day at the congress, attendees received a skeleton of the plan and would discuss what needed to be included, said St. Mary of Namur Sr. Roberta Fulton, who attended the congress.

The statement reaffirmed the church's call to reach out to the marginalized -- the black Catholic community being at times marginalized, said Josephite Fr. Anthony Bozeman, who is president of the National Black Catholic Clergy Caucus and on the board of the congress.

Even though black Catholics have a high level of engagement, the groups were concerned over the number of African-Americans leaving the church, Fulton said, and, though unrelated to the congress, the statement drew on the congress' theme of "Faith Engaged: Empower. Equip. Evangelize."

"We believe that the Church in her newness is evolving," the statement said. "It is browner and poorer, more feminine, more collegial, more concerned about charity and justice, more multilingual and polycentric. The Church in its diversity, reflects God's Trinitarian life. Our task is to recognize and facilitate God's Spirit acting in this birthing of the new."

The signers "strongly encourage" the church to "remain present and committed to bearing witness to the liberating power of the gospel in the African American community"; keep black Catholic ministry diocesan offices open; keep Catholic schools in the black community open; and renew and strengthen the church's commitment to encourage and nurture African-American vocations to the church.

The black Catholic bishops were not a part of this statement.

The continuing challenge for the black Catholic community, Ricard said, is greater inclusion in the church and the feeling of belonging. "That's always a challenge because we see the effects of racism, the residue of racism, still a factor in people's lives. ... And the society is structured in such a way that that permeates every aspect of life, including the church.

The National Black Catholic Congress assemblies began in 1889 with five meetings, but then did not meet again until 1987. That year initiated the five-year period between congresses, giving time to evaluate black Catholic life in the United States.

[Zoe Ryan is an NCR staff writer. Her email address is zryan@ncronline.org. Catholic News Service contributed to this story.]

Voice of the Faithful seeks to expand its challenges to sex abuse, church structures

Scamming immigrants for fun and profit

Cardinal Dolan, George Weigel and the fraudulence of the neocon project