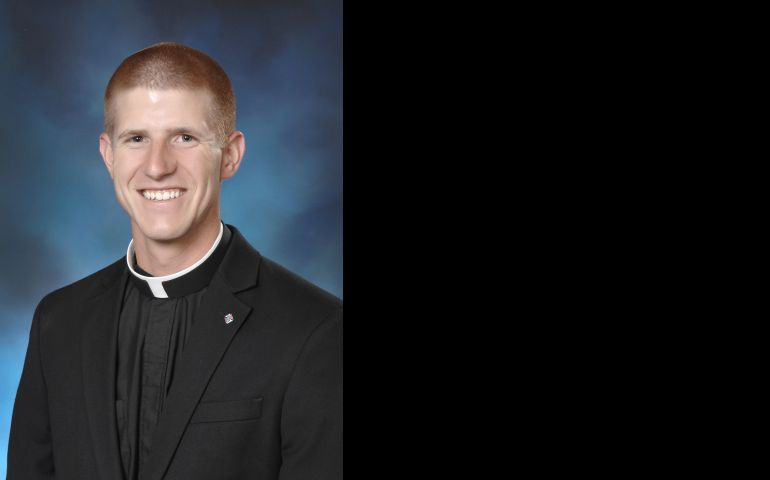 Brian Bergkamp, a seminarian in the Diocese of Wichita, Kan., disappeared into the Arkansas River July 9 while trying to save the life of another. (CNS/Catholic Advance)

Wichita, Kan. — Law enforcement officials in Wichita Monday announced that a body found some days earlier in the Arkansas River near one of the city's park was the body of Brian Bergkamp, a seminarian from the Wichita, Kan., diocese.

The Wichita Eagle Daily newspaper reported that a fisherman had spotted a piece of life vest floating in the water with a rosary attached to it. That discovery led to finding the body of the missing seminarian. The coroner on Saturday confirmed it was Bergkamp and his family was given the news first.

Bergkamp, who was studying for the Kansas diocese at a Maryland seminary, had been missing since he saved the life of a woman who fell into the Arkansas River July 9. Three days later, he remained missing and was presumed to be dead.

Bergkamp, 24, was among five people traveling in separate kayaks when all got caught in turbulent waters. According to The Wichita Eagle, Bergkamp jumped from his kayak to save the woman before getting pulled under himself. He was not wearing a life jacket. The other kayakers made it to shore.

His family said his funeral and burial would be private.

"Our prayers continue to be lifted up for the consolation of Brian's family as they take the next step to honor the memory of their son and brother," the Wichita diocese said in a statement Monday.

The diocese expressed "gratitude to God for his abundant graces offered to strengthen all impacted by Brian's death, to the members of the recovery team and personnel of the Wichita Fire and Police departments, and to those others who have helped in any way throughout this tragedy."

"Brian's diocesan family is also thankful that his mortal remains will be able to be laid to rest and have a place at which continued prayers may be offered for his eternal well-being," the statement said.

Bergkamp had just finished his second year at Mount St. Mary's Seminary in Emmitsburg, Md., which is in the Baltimore archdiocese. He is the son of Ned and Theresa Bergkamp of Garden Plain and would have been ordained to the transitional diaconate at the end of the upcoming school year. His brother, Andy, was ordained to the transitional diaconate in May. He is preparing for the priesthood for the Wichita diocese at Mundelein Seminary in Mundelein, Ill.

"Brian's death is a great tragedy and a great loss, not only for his family and friends," said Baltimore Archbishop William Lori, "but to all who knew him and to the church he was so generously seeking to serve."

"I knew Brian to be an exceptional seminarian, well on his way to demonstrating so many of the qualities needed to be a good and faithful priest," Wichita Bishop Carl Kemme wrote in an email to The Catholic Advance, the diocesan newspaper, at the time of his rescue of the kayaker. "I personally looked forward to the day when I might be able to ordain him."

Kemme said Bergkamp was quiet, dedicated, diligent in his work and studies, and presented himself always with a sense of decorum and maturity, well beyond his years. "I was looking forward to how God would use him as a priest in the Diocese of Wichita. Now, we must all mourn his much anticipated ministry and the many fruits we all knew would be abundant by his priestly life and ministry."

Life on this side of heaven is full of mysteries, contradictions and ironies, Kemme said. "Brian's untimely death is full of these mysteries, which must wait until heaven to be solved."

Lori: Church has many reasons to get right response to child sex abuse