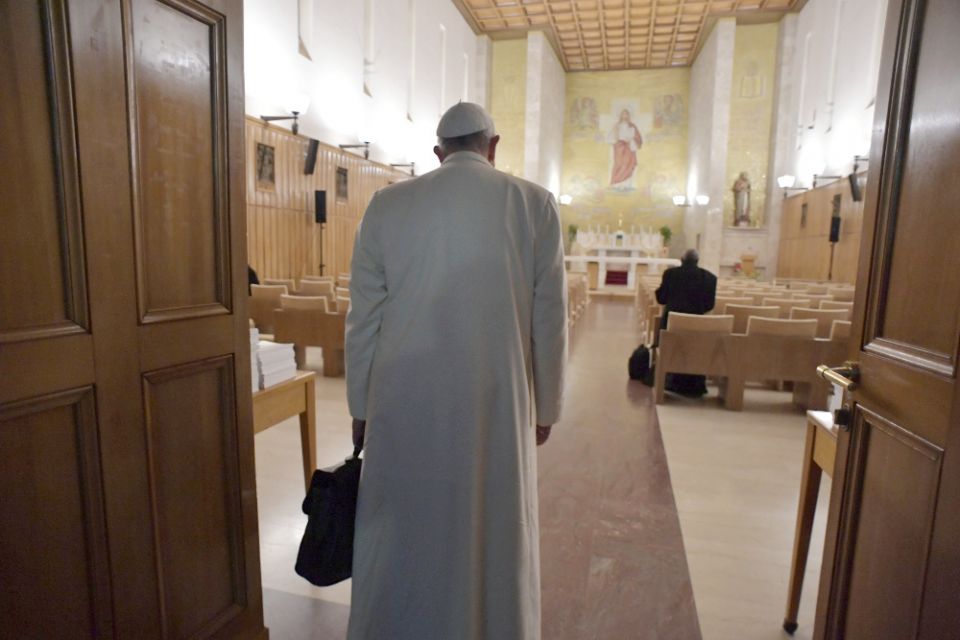 Pope Francis arrives Feb. 18 at the Pauline Fathers' retreat and conference center in Ariccia, a town about 20 miles southeast of Rome. The pope and senior members of the Roman Curia were having their annual Lenten retreat Feb. 18-23. (CNS/Vatican Media)

A Pope Francis Lexicon is a new volume collecting 54 essays by prominent figures on the different words that have become important in the ministry of Pope Francis. The book has a foreword from Ecumenical Patriarch Bartholomew and a preface from Boston Cardinal Sean O'Malley.

The volume is co-edited by Cindy Wooden, Rome bureau chief for Catholic News Service, and Joshua J. McElwee, NCR's Vatican correspondent. Following are condensed excerpts from three of the essays in the Lexicon, available in the U.S. from Liturgical Press on Feb. 15.

Careerism among ordained ministers in the church is both an attitude and behavior that Pope Francis has denounced frequently, often with blunt language and colorful images. This public stance carries some degree of risk, since he often challenges his closest collaborators — cardinals, bishops, officials in the Roman Curia and priests in the diplomatic service of the Holy See, as well as rank-and-file pastors across the globe. Some bishops complain that such rhetoric discourages them and their priests. In fact, a papal spokesman characterized Francis as an "anti-clerical pope," given his suspicion of the propensity to power and privilege that is often associated with the church's clerics.

How does Pope Francis understand careerism? What provokes his harsh condemnation? What sort of remedy does he suggest?

For Francis, careerism is an understanding of one's position in the church in terms of what one can obtain, rather than what one can give. It is an attitude as ancient as the question of the mother of James and John (Matthew 20:20-23) or the dispute among the apostles over who of them was the greatest (Luke 22:24-30). In the view of Francis, clerical pursuit of advancement, power, and prestige harms the church in a number of ways. Careerism guts the reality of ordained ministry as a vocation, that is, a way of life to which God calls some to live their baptismal commitment. Instead of a life of discipleship — a life that is essentially a response to the invitation of the Master "who came to not to be served, but to serve and give his life for the many" (Mark 10:45) — the ambitious cleric pursues his own venal designs. God has not chosen him; rather, he has chosen an ecclesiastical career for the privileges that it promises him. 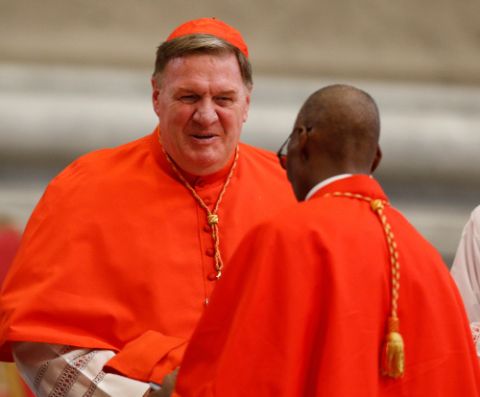 Careerism produces collateral damage among the cleric's peers and colleagues. Francis underscores the harm done by gossip, rivalries and polarizing divisions among priests and bishops. A shrewd cleric will view pastoral service and personal opinions according to their potential for advancing him in church structure, while remaining indifferent or cold to persons or situations that do not promise some return on his efforts. Such calculations are difficult to conjugate with the figure of the Good Shepherd, who "lays down his life for the sheep" (John 10:11).

What may strike some listeners as simply a harsh screed against clerical ambition might offer another connection to Jesuit spirituality, an invitation to the practice of particular examen. Far from tarring all ordained ministers with the same brush, the Holy Father asks clerics to find the movement of God in all the people and events of daily life.

The force and frequency of his criticism manifests the high esteem of Francis for the pastoral service of priests and bishops. He is not calling for a sort of leveling movement that would eliminate ordained ministry in the church. Episcopal office, for example, should not be sought, requested, bought or sold, but embraced in obedience. At the same time, there is great beauty in the office of bishop and communion with him is essential for the spiritual health of the people. The true glory of these ministries comes from the opportunities they offer to lay down one's life for others.

When I think of Pope Francis' frequent mention of our "throwaway culture," I imagine him riding a bus, as he loved to do, in Buenos Aires. I can picture it: vendors getting on and off, peddling a wide variety of wares; the loud and lively interaction of groups of students; the noise and exhaust of a commuting world; the stale smell of alcohol and sweat; a few well-to-do people isolated by iPhones; the elderly, the animated, the preoccupied, the impoverished; in short, a cross-section of humanity momentarily sharing a crowded space. What would have been the reverie of a thoughtful Jesuit not knowing he would someday be pope?

We will never know, but I think we can hear echoes of it now in his writings, with "why?" rising prominently from some reflective core. Why is there such unemployment, rendering vulnerable people so easily replaceable? Why are so many condemned to live on the material and existential margins? Why is there not more farsightedness in protecting the environment for future generations? Who pulls the strings that control the economic and financial policies of the globalized world? Why is there not more urgent concern for the health and welfare of the most impoverished among us?

"I hear from Francis the moral clarity of the Gospel spoken with genuine compassion. It is the human connection that makes his words all the more eloquent."

The questions Pope Francis articulates are hardly dispassionate. In an April 2014 audience with the Italian Movement for Life he urged: "We must also say, 'No to an economy of exclusion and inequality.' This economy kills. Human beings are themselves considered consumer goods to be used and then discarded. We have created a 'throwaway culture' which is now spreading. In this way life, too, is discarded."

Francis speaks from lucid social analysis, exposing systemic threads which link the destructive realities of domination, manipulation and exploitation of peoples. He has named the mentality of profit at any price, with no concern for social exclusion or the destruction of nature. He has denounced a world economic and financial system lacking in ethics. He has called for a shift that would put the economy at the service of peoples rather than a situation in which human beings and nature are at the service of money. He has invited positive, redemptive change capable of releasing the human family from the bondage of individualism and the despondency it spawns.

I hear from Francis the moral clarity of the Gospel spoken with genuine compassion. It is the human connection that makes his words all the more eloquent.

I know from experience that literally rubbing shoulders on a crowded bus creates embodied memory. The illusion of separation is shattered when body parts collide. That physical knowing endures. We have a pope whose thighs have pressed against those of weary seat companions. Distance from human suffering is just not part of who he is. May it become impossible for all of us!

"The jury is still out on Pope Francis' position on women. "Is he pro-woman?" is a question left hanging in the air."

The jury is still out on Pope Francis' position on women. "Is he pro-woman?" is a question left hanging in the air.

I like to believe that he is getting there. Not because he has made any sweeping changes to benefit women, but because his internal compass seems to be pointing in the right direction. He has sensitivity to women's subordination both in the church and in the world, and is emphatic in his denouncement of it. In the very first year of his pontificate when addressing the Pontifical Council for the Laity at their symposium on Mulieris Dignitatem, he shared: "I suffer …when I see in the church or in some ecclesial organizations … that women's role of service slips into a role of servitude." Three years later, while speaking to the International Union of Superiors General, he went a step further. "When you Superiors are asked for something that is more servitude than service," he advised them, "have the courage to say 'no.'"

Despite these positive signs, however, Francis continues to keep leadership positions in the Vatican's dicasteries out of bounds for women. He believes that appointing women as heads of Vatican offices would promote a "functionalism" of women's roles in the Catholic church. It is no surprise therefore, that he appointed a priest as secretary of the new Dicastery for Laity, Family and Life, which became effective in 2016, even though the office's statutes make provision for the appointment of a layperson. However, five months later in what seems to be a balancing move, he appointed married women as undersecretaries -- Linda Ghisoni, a seasoned canon lawyer and judge, for the section on laity, and Gabriella Gambino, a professor of Bioethics, for the section on life.*

With all his contradictions, his occasionally misplaced, if well-intentioned, humor, and his sometimes off-color remarks about women that expose the benevolent patriarchy from which he operates, Francis has done more to empower women in the church than any pontiff before him. It cannot be easy walking the tightrope between the official teachings of the church with their patriarchal underpinnings and the truth he perceives in the lives of the women around him, but one thing Francis is not short of is the courage to act on his convictions. Already his interpretation and application of doctrine have attracted public censure, even from his fellow bishops, but this has not deterred him. At the other end, many criticize him for his refusal to change church teaching. His reasoning however, is clear. In a March 2014 interview with Italy's Corriere della Sera, he explained: "The question is not that of changing the doctrine, but to go deep and to ensure that pastoral care takes into account situations and what is possible for people." It is a position that is reminiscent of Jesus' radical understanding of the law (Matthew 5:1-11, 17) and displays a rootedness in the experience of people, not in abstract academics. But it is also a strategy to not attract attention and quietly lay the groundwork for future change.

It would seem that much of Francis' understanding of women's situation is intuitive, not drawn from any principles or ideology, and that perhaps is why he is unable to see the threads of patriarchy and sexism that run through so much of church teaching. It would also account for the contradictions and inconsistencies in his stand. At the same time, it appears that sometimes he simply likes to stir the pot, to generate a conversation in the church around an issue he considers important in the hope of giving it necessary attention. Women find the flavors of his meals sometimes sweet, sometimes bitter, but tasty enough to whet their appetite and ask for more.

*This excerpt has been updated.

People | Book gathers perspectives on the words of Pope Francis

Hispanic council seeks to minister to the whole church