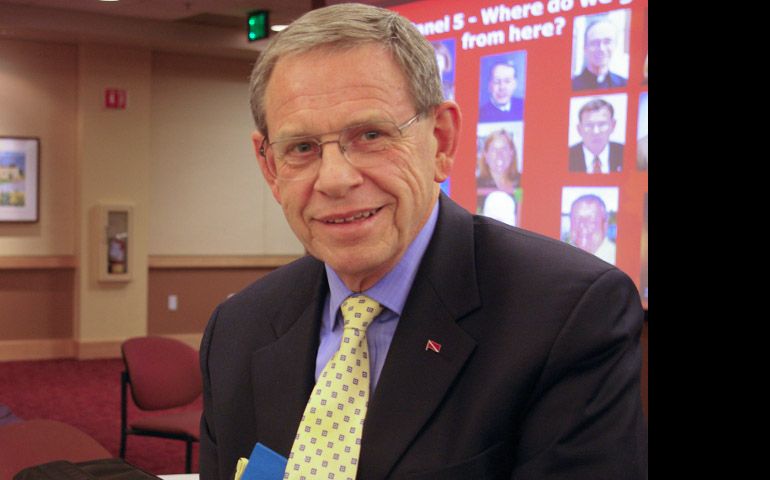 Roy Bourgeois' canon lawyer has written to the leadership of the Maryknoll Fathers and Brothers, asking for "honest answers" about the order's involvement in the Vatican's dismissal of the longtime peace activist and priest.

Dominican Fr. Tom Doyle's questions include what knowledge the religious order had of the move by the Vatican's Congregation for the Doctrine of the Faith and why it hasn't shared the official document from the papal office.

Bourgeois, widely known for his work calling attention to injustices in Latin America, had come under scrutiny for his support of women's ordination. The Vatican congregation dismissed him from the Maryknoll Fathers and Brothers, of which he had been a member for 45 years, on Oct. 4, the order announced in a press release Nov. 19.

The dismissal drew criticism from a former head of the U.S. missionary order, who said in an interview it represented interference "with the integrity of the society."

The Maryknoll Fathers and Brothers have not responded to requests for comment on the matter or to requests for a copy of the Vatican congregation's letter ousting Bourgeois.

A number of canon lawyers have raised questions about the letter's content and authority, saying the circumstances surrounding the Vatican's removal of the priest are unclear and leave ambiguous under what authority the Vatican acted.

Doyle writes in his letter, which is dated Nov. 20 and addressed to Dougherty and the members of the order's general council, that the timeframe of the decision to remove Bourgeois means it was made after a June meeting between Doyle, Bourgeois and Maryknoll Fr. Edward Dougherty, the order's current superior general.

In interviews following that June meeting, Bourgeois said the discussion made no mention of his removal, focusing instead on the rights of conscience of Catholics.

"As Roy's duly appointed canonical counsel I have some questions that deserve honest answers," Doyle writes.

Among Doyle's questions to the Maryknoll leadership:

Doyle provided a copy of his letter to NCR on Wednesday, after Doyle said he received a response from a member of Maryknoll's leadership team.

In that response, Doyle said, the Maryknoll leader said Dougherty has been out of the country since Nov. 17 and said he would be able to meet with Bourgeois at Maryknoll's New York headquarters to discuss the matter Dec. 6.

Bourgeois first found out about the Vatican's move in an unofficial phone call from a Maryknoll priest who does not hold a leadership position in the order, Doyle wrote.

Bourgeois also did not see the press release about his dismissal until Doyle faxed him a copy hours after Maryknoll released it. Bourgeois has had "no direct communication with anyone from the level of the general leadership of Maryknoll," according to the letter.

"I found the manner of communicating this information to Roy to be insensitive and certainly not in keeping the fraternal spirit of Maryknoll," Doyle writes.

Doyle wrote that Bourgeois "did not commit a dastardly canonical crime," comparing Bourgeois' support of women's ordination to priests who sexually abuse children or steal money.

Doyle also says he "take[s] issue" with the official release from Maryknoll regarding the move.

"The press release reads as if it had been dictated by an official at the Congregation for the Doctrine of the Faith," Doyle writes. "It presumes that [Bourgeois'] actions have been a threat to the 'sensitivities of the faithful' which is a myth. If anything his actions have been a threat to the narcissistic obsession with control that infects so much of the Vatican bureaucracy."

Without access to the actual document from the Vatican congregation regarding the matter, Doyle writes that he and Bourgeois "have no idea if there is any possibility of recourse."

Doyle concludes: "Beyond that what Roy needs and deserves at this painful juncture in his life is the fraternal compassion and love of the Maryknoll family that he has been a part of for most of his life."

Religious vocations: not a numbers game