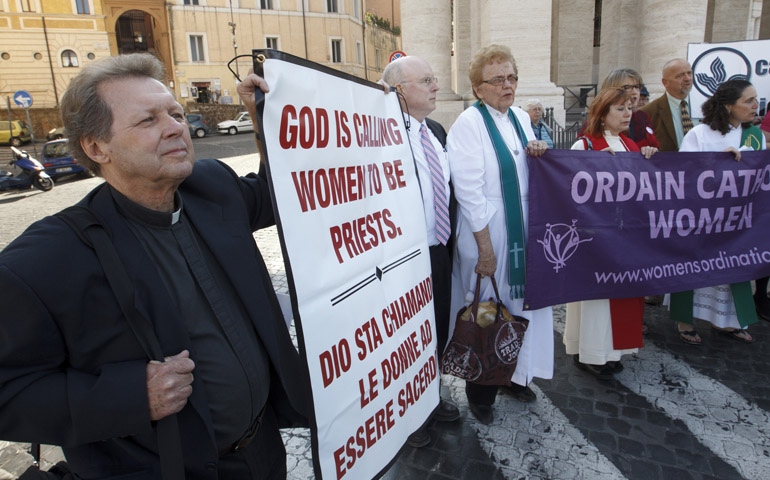 Roy Bourgeois stands with other supporters of women's ordination at the gates of St. Peter's Square during a 2011 demonstration in Rome. (CNS/Paul Haring)

Roy Bourgeois, the longtime peace activist and Catholic priest dismissed by the Vatican because of his support for women's ordination, has received the official letter notifying him of the move three months after it was made.

The letter, which comes from the Vatican's Congregation for the Doctrine of the Faith, is signed by the congregation's prefect on behalf of Pope Benedict XVI and states that the pope's decision in the matter is "a supreme decision, not open to any appeal, without right to any recourse."

Written in Latin, the letter dismisses Bourgeois from the priesthood and restricts him from all priestly ministries. It asks Bourgeois to return a signed copy "as a proof of reception and at the same time of acceptance of the same dismissal and dispensation."

The letter, dated Oct. 4, was made available Wednesday by Bourgeois, who said he received it last week from the Maryknoll Fathers and Brothers, the U.S. missionary society he served as a priest for 40 years. Bourgeois said he did not plan to return a signed copy.

Bourgeois said he found the request to sign the letter "somewhat laughable" at first because he could not fully understand its contents until he obtained an English translation of the Latin from a translation service.

His signature, Bourgeois said, would indicate he accepts the letter's contents.

"I do not accept it," he said. "I think it's a grave injustice. I think it's mean-spirited. I think it contradicts whatever Jesus had talked about and taught us."

Maryknoll announced the move against Bourgeois in a press release Nov. 19, but neither the society nor the Vatican congregation responded to previous requests to make public the official letter announcing the move.

Bourgeois said his copy of the letter arrived via registered mail last week along with a short note from Fr. Edward Dougherty, the society's superior general.

The Vatican's dismissal, Dougherty wrote to Bourgeois in that note, "is irrevocable and not subject to appeal."

Mike Virgintino, the communications manager for the Maryknoll Fathers and Brothers, wrote in an email Thursday that Maryknoll officials attempted to schedule a meeting with Bourgeois in December to personally deliver the letter but the meeting had to be postponed following the death of Bourgeois' father in November.

The Vatican's letter states Bourgeois may not exercise any priestly ministries, including giving homilies or having a "directive role in a pastoral environment." He also cannot hold an office or teach at any seminary or theological school.

The letter also asks Maryknoll to "exhort [Bourgeois] assiduously so that, once [his] proud behavior has been purified, he will participate in the life of the People of God in conformity to his new condition, will give edification and in this way will show himself a worthy son of the church."

The letter is signed by Archbishop Gerhard Müller, the doctrinal congregation's prefect, and Archbishop Luis Ladaria Ferrer, its secretary.

Oblate Fr. Francis Morrisey, a canon lawyer at Ottawa's Roman Catholic University of Saint Paul, said the official document seems clear that Bourgeois has no recourse in the matter, as his removal was a decision of the pope himself.

William Quigley, an American lawyer who had the original version of the Vatican letter professionally translated into English for Bourgeois, called the letter "very, very unfair" because it does not mention any charges against Bourgeois.

"It's like they gave him a punishment, but they've never given him a charge," said Quigley, the director of the Gillis Long Poverty Law Center at Loyola University New Orleans and a former legal director for the Center for Constitutional Rights.

"Under the most basic human rights law ... everybody has a right to know what the charge is and to have a hearing before a fair tribunal," Quigley said. "This is bewildering."

Bourgeois said Wednesday he would continue to speak in favor of women's ordination and did not think the Vatican's letter would stop others from also expressing support.

Comparing women's ordination to the abolition of slavery and women's suffrage, Bourgeois said "this movement of gender equality ... is rooted in God, equality and justice. It's not stoppable."

"This letter is not going to stop anything," Bourgeois said. "I think it's simply going to bring more people into the movement."

Bourgeois first attracted episcopal attention after he participated in the ordination of Roman Catholic Womanpriest Janice Sevre-Duszynska in August 2008. Shortly after, the Vatican congregation notified him he had incurred a latae sententiae, or automatic, excommunication for his participation.

Maryknoll asked Bourgeois to publicly recant his support of women's ordination, telling the priest in a March 2011 letter he faced laicization and removal from the order if he did not comply.

In a series of letters and interviews since then, Bourgeois said he could not comply with the request for reasons of conscience.

The official Latin document regarding Roy Bourgeois by joshua_mac8430

Translation of papal letter to Roy Bourgeois by joshua_mac8430