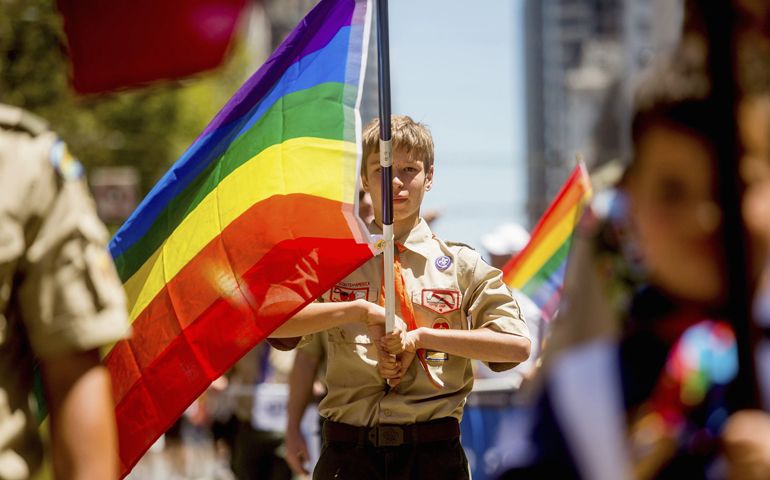 A Boy Scout carries a rainbow flag during the San Francisco Gay Pride Festival in California on June 29, 2014. (CNS/Reuters/Noah Berger)

The Boy Scouts of America ended its national ban on openly gay adult leaders and employees on Monday while allowing local religious units to continue to exclude gay adults.

Meeting by conference call, 79 percent of the BSA's national executive board members favored the resolution ratified earlier this month by its executive committee.

The policy change represents the end of a long and bitter struggle over whether to accept gay members that began more than two years ago when it allowed gay youths to participate, but not adults.

In May, BSA President Robert Gates declared the ban on adult gay leaders should be removed, saying the Scouts could not ignore "the social, political and judicial changes taking place in our country."

"This change also respects the right of religious chartered organizations to choose adult volunteer leaders whose beliefs are consistent with their own."

Religious groups make up some 70 percent of chartered organizations, and some are already reacting -- with opposing viewpoints -- to the vote. The Church of Jesus Christ of Latter-day Saints could depart, saying it is "deeply troubled" by the vote and will review the decision in the weeks ahead.

Prior to the vote, BSA officials predicted it would be "unlikely" that troops based at churches would end up in court if they ban gay Scoutmasters.

"We live in a litigious society, and frivolous lawsuits are threatened and filed every day," reads the 14-page memo from the Boys Scouts' law firm, Hughes Hubbard & Reed. "However, any lawsuit challenging the religious requirements in a Scouting unit chartered by a religious organization would be unlikely to succeed or even make much progress."

R. Chip Turner, national chairman of the BSA Religious Relationships Committee, said he hopes the memo will calm concerns that leaders of religious chartered Scout units may have.

"There's always the fear of the unknown," he said.

"What they're not taking into account is the new frontier that we're on, where judges are being social change agents," said John Stemberger, chairman of Trail Life USA, which bills itself as a Christian alternative to the Boy Scouts.

"I think they're taking good, bold steps for respecting the law of the land and the society that we live in while still retaining strong exemptions and accommodations for those who might feel differently for religious reasons," said Mark Goldfeder, senior fellow at the Center for the Study of Law and Religion at Emory's law school.