Br. Louis has sought 'to live the message I was trying to teach' 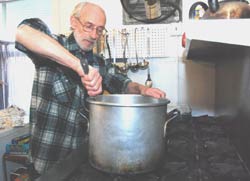 KANSAS CITY, MO. -- After 28 years of dedicated leadership serving the economically impoverished here, a local icon -- known by many by his white beard and seemingly constant stream of flannel shirts -- has left the Catholic Worker community that he sometimes single-handedly sustained for the past three decades.

Part of the Holy Family Catholic Worker House since 1982, Christian Br. Louis Rodemann left June 3 to take a yearlong sabbatical away from the community, which has provided a simple breakfast, hot supper, companionship and numerous other basic services to those in what is called the midtown section of Kansas City.

Rodemann, 70, said he will spend the year in prayer, reflection and rest after years when the demands of the community he served left little time for such pursuits.

To listen to a conversation between Br. Louis Rodemann and NCR editor Thomas C. Fox about the Catholic Worker movement and life at Holy Family House, visit NCRonline.org/podcasts.

Rodemann came to Kansas City in 1961 as a newly professed member of the De La Salle Christian Brothers assigned as a teacher to a boys’ high school. He said that during his many years as an educator he was “always searching for a way, as practically as possible, to live the message I was trying to teach.”

In the early 1980s he seemed to have found what he was looking for when he became a weekend volunteer at Holy Family House. He first took on the task of visiting a local farmers’ market Saturday afternoons to beg for produce the vendors had not sold. He supplemented what the vendors gave by “dumpster-diving” -- crawling into the dumpsters to salvage usable food discarded earlier in the day.

Back at Holy Family House, the staff urged him to help pick over the quantities of fruits and vegetables he had brought, some of which, according to Rodemann, “needed immediate radical surgery.” The staff invited him to stay for supper and prayer. Eventually Rodemann asked the leaders of his order if he could be assigned to Holy Family House.

Rodemann said he was first told that the Christian Brothers is a teaching order, not a social service order. However, in the spring of 1982, Rodemann was granted permission to join the Holy Family House staff “for a year.”

Holy Family House was founded in 1974 to follow a way of life outlined in the 1930s by Dorothy Day and Peter Maurin. They had started houses of hospitality where New York City’s impoverished could find refuge.

Holy Family House offers a breakfast of toast, day-old doughnuts, and coffee four mornings a week and supper five nights a week. The evening meal, serving some 400 people a week, is often prepared and served with the help of church volunteers. Staffers assist guests with government services paperwork, prescription vouchers, discounted bus passes, and winter and summer clothing vouchers. In addition, the house offers a place to come and talk or listen, and a porch to sit on.

Rodemann was born on a farm near Jefferson City, Mo., the eldest of seven children in a community where, he says, “everyone was German, everyone was Catholic, and everyone was a farmer.”

He worked alongside his parents in the fields and saw them can “hundreds and hundreds of quarts of fruit and vegetables.”

“If it wasn’t in season or canned, we didn’t have it,” he said. “We went to the grocery store only for sugar, salt and maybe flour.”

Rodemann described his first years at as a teacher as “the beginning of my education in an urban setting.” Many of the students in his classrooms were members of ethnic groups that were new to him, and many “grew up poor and felt the effects of poverty.”

The 1960s were a challenging era for high school teachers. It included, he said, “the rumblings of the Vietnam War and the civil rights movement.”

Among his closest friends was Christian Br. David Darst, with whom Rodemann taught. Darst was one of the Catonsville Nine, a group that also included Daniel and Philip Berrigan, who broke into the Selective Service offices in Catonsville, Md., on May 17, 1968, and burned hundreds of draft files.

Darst and the rest of the Catonsville Nine were sentenced to federal prison. But Darst, 28 years old, was killed Oct. 30, 1969, in an automobile accident in Nebraska.

With time, Rodemann was able to work through his loss and find what he describes as “the impetus for revitalization.” Such loss, he said, is “the cost of belief in resurrection, the belief that spirit is stronger than body.”

He said he finds strength in the belief that “even after death, presence is effective, active.”

“Many times when I would be in challenging situations, I would simply say, ‘David, we started out together and I expect your presence, your spirit, your energy to be still here,’ ” Rodemann said.

Looking back on his years at Holy Family House, Rodemann said, “I can’t think of a better place to be than a Catholic Worker house, to be integrated into this life, to be stretched, to be with people who would not be available to you unless you entered into this kind of life. What’s happened is what Dorothy Day and Peter Maurin intended.”

[Patty McCarty is an NCR contributor. This story first appeared in the April 30 issue of The Catholic Key, the newspaper of the Kansas City-St. Joseph, Mo., diocese.]

People | Br. Louis has sought 'to live the message I was trying to teach'

You might not see her, but she is right here