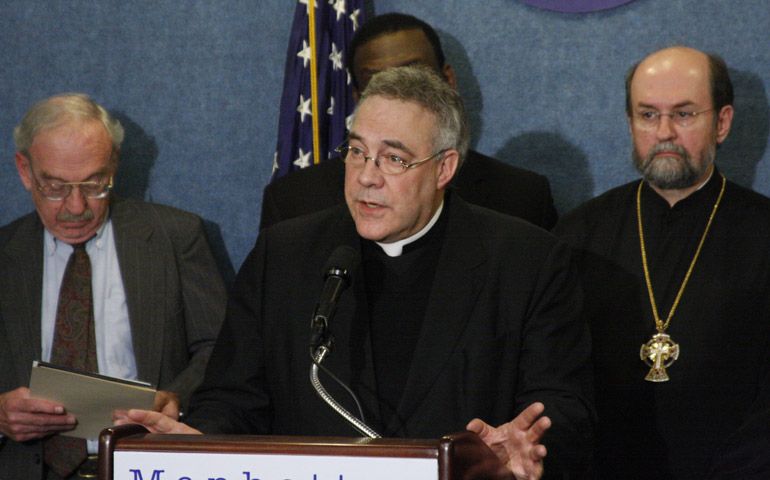 Fr. Robert Sirico, founder of the Acton Institute, speaks about the "Manhattan Declaration: A Call of Christian Conscience" document Nov. 20 at the National Press Club in Washington. (CNS/Daniel Sone)

Vatican City — Fr. Robert Sirico has been courting controversy for most of his adult life.

In the early 1970s, he was a radical activist in California, campaigning for left-wing causes with the likes of Jane Fonda and her then-husband, Tom Hayden. Later in the decade, he returned to the Catholic faith of his childhood and eventually became a priest.

But if he found inner peace, he did not cease stirring things up. He had, by then, discovered the works of Ludwig von Mises, Friedrich Hayek and other economists of the "Austrian school," who expounded the virtues of free-market capitalism.

As Sirico recounts in a new book, Defending the Free Market: The Moral Case for a Free Economy, he concluded not only that the free market was the most efficient system for the distribution of resources and their transformation by human creativity; he also decided that capitalism was essentially compatible with the principles of justice, peace and charity in Catholic social teaching.

That belief was and remains unconventional within the church, and it has earned Sirico, 61, and his Michigan-based think tank, the Acton Institute, fervent fans and detractors.

At the U.S. bishops' general assembly in November, Bishop Earl A. Boyea of Lansing, Mich., proposed that the committee on international justice and peace retain Acton as an expert consultant. But retired Archbishop Joseph A. Fiorenza of Galveston-Houston accused Acton of insufficient regard for the church's social magisterium. The archbishop said Acton had dismissed the 1891 encyclical "Rerum Novarum," and particularly the document's affirmation of workers' right to unionize, as "time-framed" and "not applicable today."

Sirico says Fiorenza's criticism was based on a misunderstanding of remarks the priest had made earlier in the year.

"'Rerum Novarum' is applicable today because it articulates timeless truths of the Catholic faith and the insight and the expertise that the church has into the human condition," Sirico said, but "there are features of any encyclical that are bound by its historical context." The document's very title refers to "new things" in the period's social and economic life that Pope Leo XIII wrote the encyclical to address, the priest said.

"The church consistently has taught that workers have a right to organize," Sirico said, yet it does not follow that white-collar workers in 21st-century America face problems comparable to those of factory workers under late 19th-century "savage capitalism."

That argument exemplifies Sirico's more general insistence that applying principles of the church's social teaching is a matter of prudential judgment, allowing for a range of legitimate approaches, including market-based solutions.

Sirico said he co-founded Acton in 1990 to "help bring sound economics to good intentions," a mission that includes advising theologians and religious leaders. Even with the best intentions, he said, "ignoring economic realities" can lead to the "unintended harm of other people."

For instance, he argues, the church's teaching that all people should have access to good health care does not necessarily translate into support for government health insurance. Making the government the main health care provider, he said, "cuts out the knowledge base (of) a competitive pricing market," raising the costs of services.

Sirico also suggests that dangers to religious freedom -- such as the Obama administration's requirement that the health insurance plans of Catholic institutions cover contraception and sterilizations, in violation of the church's moral teaching -- are inherent in "welfare-state" social service programs under government control.

While not denying the moral failures of capitalism, Sirico cites Blessed John Paul II and Pope Benedict XVI to argue that the "problem with capitalism is not the economic system as such but the distorted values that may be present among actors in a market economy." He says that business people need strong moral formation to ensure that the right values, rather than the market's supposed dictates, determine their investments and other choices.

"The church doesn't uphold or endorse or canonize any economic model," Sirico said, making it clear that in his own value system, faith trumps economic philosophy.

He calls the work of Ayn Rand, one of the most popular and influential proponents of free-market economics, a "false gospel" of "radical individualism."

"She's looking for Jesus Christ but she rejects all of the fundamental principles of Christianity, such as human solidarity, even a clear sense of human dignity," he said.

On the other hand, Sirico cheers the recent decision by the U.S. bishops to endorse the sainthood cause of Dorothy Day, whose holiness he finds manifest in her service to the poor and her reverence for the sacraments. Never mind that the founder of the Catholic Worker movement hardly shared his enthusiasm for the benefits of capitalism.

His arguments for a free-market economy and market-based approaches to social problems are not articles of faith, Sirico says, but merely contributions to the church's larger effort to serve the common good.

"On issues of life, on issues of marriage, those are critical non-negotiables," he said. "On the other questions, you see bishops, you see laypeople, you see academicians having this vibrant debate."