Cardinal Burke insists he is serving Francis, not opposing him 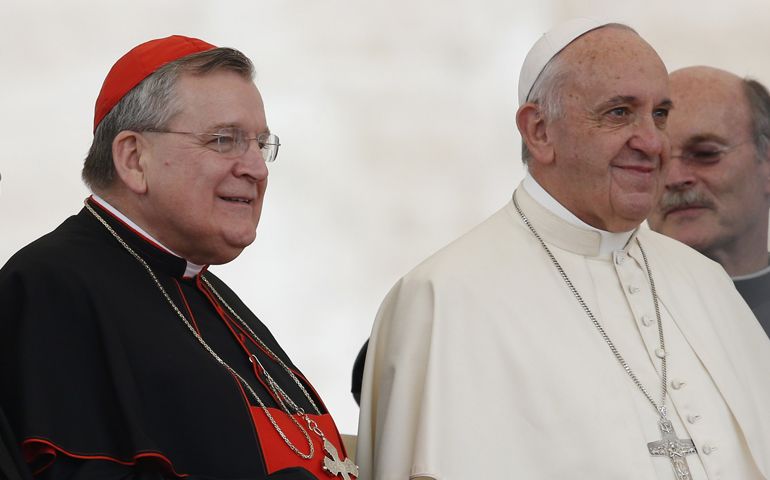 U.S. Cardinal Raymond L. Burke, patron of the Knights and Dames of Malta, poses with Pope Francis during his general audience in St. Peter's Square at the Vatican Sept. 2, 2015. (CNS/Paul Haring)

Ever since Pope Francis was elected in March 2013, he has faced strong opposition from traditionalists unhappy with his push for church reforms -- and the face of that opposition has often been Cardinal Raymond Burke, an American prelate who has worked in senior positions in Rome for most of the past decade.

Francis eventually moved Burke out of key Vatican jobs and into a more ceremonial post as patron to the Knights of Malta, an apparent downgrade that both Burke and the pope insist wasn't tied to the cardinal's criticisms.

But Burke, a former archbishop of St. Louis who has a devoted following among conservatives, has continued to use his Roman platform to speak his mind.

He did that again most recently in a book-length interview in which he hits many of the themes that have drawn attention in the past: critiquing "radical feminism" and homosexuality ("a wounding of nature," he calls it) as well as the "secularization" and moral relativism that he says have infected society and the Catholic Church.

The reforms that followed the Second Vatican Council of the 1960s are also a recurrent target, as he again champions a return to the old Latin Mass and voices nostalgia for the Catholicism of his boyhood (Burke says that he first felt a tug to the priesthood at the age of 8). The cardinal also has a provocative new take on Islam, which he said "wants to govern the world."

Notably absent from the book, however, and from direct criticism, is Francis himself. Throughout the extended interview with French journalist Guillaume d'Alançon, which was published under the title, Hope for the World: To Unite All Things in Christ, Burke approvingly and frequently cites Saint John Paul II, the pope who named him a bishop back in 1995, and Pope Emeritus Benedict XVI, who brought him to Rome in 2008 and made him a cardinal two years later.

He even praises Saint Pius X, the pope who a century ago was famous for his campaign to expunge the heresy of "Modernism" from the church -- errors that the cardinal says "are still current."

But Francis is mentioned only in passing, which seems just fine by Burke.

"I know about all these depictions. People call me 'the enemy of the pope' and so forth. I have never been and I am not presently the enemy of the pope," Burke told RNS by telephone recently from his home state of Wisconsin, where he was spending time this summer.

"I have never, in anything I've said, shown disrespect to the papal office, because the Catholic church doesn't exist without the office of Peter," he said, referring to the apostle who Catholic tradition views as the first bishop of Rome and therefore the first pope in an unbroken succession up to the present day.

"I've said to the pope himself, in conversations with him -- and these by the way are friendly conversations -- I told him, 'Holy Father, the only way I can serve you is by speaking the truth in the best and clearest way possible.' His response to me is: 'That's what I want.'"

The cardinal said that his own critics -- his outspokenness has left no shortage of those -- "would like to construe my relationship with the Holy Father as some kind of ongoing hostility or war between this reform of the church, this revolutionary reform (that Francis is promoting), and these old die-hards who resist it. That simply is not the case."

During the course of a half-hour conversation, Burke did continually return to his commitment "to simply speak up to defend what the church has always taught and practiced."

That commitment means that Burke will continue to push hard against the heart of Francis' reformist approach, and that he will continue to be seen as, if not an enemy of the pope, at least his counterweight, and a favorite of those who would love to see the 68-year-old Burke one day succeed Francis, who turns 80 in December.

One of the chief targets for Burke of late has been the pope's controversial document Amoris Laetitia ("The Joy of Love") in which Francis synthesized the intense debates about church teachings and the modern family that took place across two major meetings of bishops from around the world that Francis convened in Rome in 2014 and 2015.

The pontiff's lengthy exhortation, as it is known, was viewed as enshrining a new, more welcoming approach to Catholics who do not fit the textbook ideal of the catechism -- single parents and gays, for example, and divorced and remarried Catholics.

"The Joy of Love" seems to leave open the possibility that divorced and remarried Catholics could receive Communion, for example. It has opened the door to the kind of discernment and appeals to conscience that critics say are misguided and in fact undermine long-standing Catholic doctrines and practices, and that's why it has become a focal point for conservative dissent.

Burke is one of those critics. One of his main arguments of late is that the papal exhortation is not an expression of the "magisterium," that is, authoritative church teaching, but that parts of it may be correct but others are not. "A mixture of opinion and doctrine," as Burke put it in his interview with RNS.

"We can't understand this document to be magisterium in the way other documents have been because Pope Francis simply has a different approach to the papacy," the cardinal said. "In his documents he mixes his own thoughts and approaches, which are personal, with questions of doctrine."

Burke says he knows some disagree with him, but he said that he and "many serious-minded people" in the church hierarchy are calling for Francis to issue a follow-up document.

"I trust that something will have to happen also because some very formal calls for clarification are in process and they simply will demand a response," Burke said, "not in any kind of hostile or aggressive way, but simply for the sake of souls because people are getting confused."

Indeed, "confusion" is the word that Burke said he would use to describe the mood in Rome these days over "what direction the church is going."

"And then with confusion comes division, and so you get people accusing one another back and forth," he said ruefully. "I do believe very strongly that we need to have a clearer direction, a clearer enunciation of the faith and its practice. That way would also help to settle down this confusion and the division which follows from it."

But when asked directly, Burke is equally firm that whatever happens, he has no intention of leading a breakaway, schismatic movement, an option some on the Catholic right have contemplated.

"Absolutely not," he said. "I will never leave the Catholic Church. No matter what happens I intend to die a Roman Catholic. I will never be part of a schism.

"I'll just keep the faith as I know it and respond in the best way possible. That's what the Lord expects of me. But I can assure you this: You won't find me as part of any schismatic movement or, God forbid, leading people to break away from the Catholic Church. As far as I'm concerned, it's the church of our Lord Jesus Christ and the pope is his vicar on earth and I'm not going to be separated from that."

People | Cardinal Burke insists he is serving Francis, not opposing him

Pope: Too many Christians have watered-down hope, lukewarm faith in God