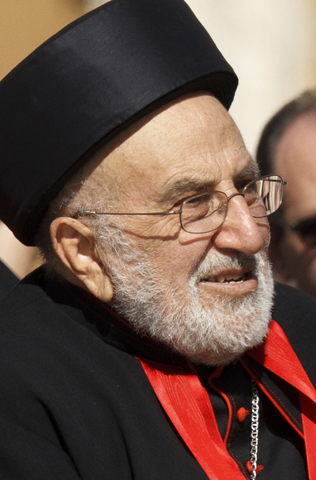 Pope Francis praised the dedication of the retired patriarch of the Chaldean Catholic Church, Cardinal Emmanuel-Karim Delly, 86, who died Tuesday in a hospital in San Diego, according to the California-based Chaldean Catholic Eparchy of St. Peter the Apostle.

In a telegram of condolence to Patriarch Louis Sako of Baghdad, Pope Francis recalled "with deep gratitude the late patriarch's dedication to his people and to the promotion of respectful, just and peaceful relations with followers of other religious traditions."

The Eparchy of St. Peter the Apostle announced that a funeral service for the retired patriarch was to take place in late afternoon Thursday at St. Peter Chaldean Catholic Cathedral in San Diego.

Prayers for the deceased at 4 p.m. were to be followed by a two-hour viewing period. Afterward, Delly's body was to be taken to Michigan. No details about burial or internment were released. The Chaldean Catholic Eparchy of St. Thomas the Apostle is based in Southfield, Mich.

The cardinal had already retired as an archbishop serving in the patriarchal curia of Baghdad when, in December 2003, he was elected patriarch just eight months after the U.S.-led invasion of Iraq. He became one of the most notable voices of suffering Iraqi Christians and repeatedly pleaded with countries to take pity on Iraqi refugees and not send them back home.

Sako, who succeeded Delly, told the Vatican's Fides news agency, "Cardinal Delly served the Chaldean church with dedication for more than 60 years, first as a priest, then as a bishop and as patriarch. He went through very difficult periods, including after the revolution in 1958, the wars of recent decades and the persecution of Christians that followed the U.S. invasion."

"Throughout that whole time, he remained faithful to his country and his people, and not abandoning his flock, he remained with his faithful praying, helping and encouraging," Sako said.

Ordained a bishop in 1963, he attended the second, third and fourth sessions of the Second Vatican Council. He was named an archbishop in 1967 and Pope Benedict XVI made him a cardinal in 2007.

Delly's death leaves the College of Cardinals with 216 members, 119 of whom are younger than 80 and therefore eligible to vote in a conclave.