Cardinal Kasper: Pope Francis 'does not represent a liberal position, but a radical position' 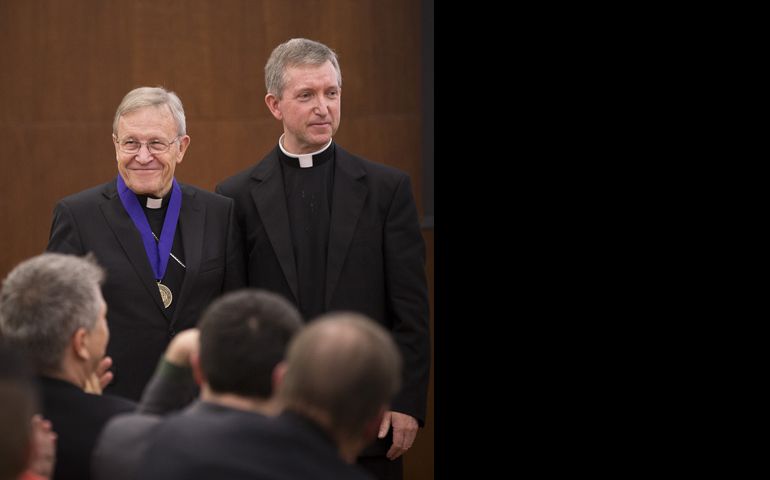 On Thursday, Cardinal Walter Kasper, president emeritus of the Pontifical Council for Promoting Christian Unity, received the Johannes Quasten Medal for Excellence in Scholarship and Leadership in Religious Studies at The Catholic University of America in Washington, D.C.

Kasper, the German theologian best known for his writings on the role of mercy in church teaching, gave a 50-minute lecture on the meaning and significance of Pope Francis.

What follows are some highlights from that speech, titled "Theological Background of the Ecclesiological and Ecumenical Vision of Pope Francis."

Kasper, nicknamed the "pope's theologian," began by calling Francis "a pope of surprises."

"Not the least surprising," he said, remarking on the early days of Francis' papacy, "was that the new pope within a short period of time succeeded in brightening up the gloomy atmosphere that had settled like mildew on the church."

The cardinal mentioned the "benevolent [media] attention" the pope has enjoyed -- a surprise -- and the great acceptance and enthusiasm shown by much of the laity to Francis' vision and style -- another surprise.

But, "as one would expect," he said, "there are of course the critical voices who say, 'This pope does not please us because he pleases too much.' "

"These attitudes aren't surprising," said Kasper, whose thoughts on Communion for divorced and remarried Catholics have greatly angered some within the Roman Curia. "There are a lot of you," he said, "even among the episcopate and the younger clergy, who do not really trust this new style or this new enthusiasm" and who display a "condescending wait-and-see attitude."

Remarking on the tension that grips the church today, Kasper quipped that what for many "is the beginning of a new spring is for others a temporary cold spell."

While efforts may exist to "trivialize Pope Francis" or to appropriate him "for one's own reform concepts," especially in the Western world, he said, the Argentine pope "does not fit into our now rather worn-out scheme of progressive or conservative."

He "cannot be categorized, much less appropriated, by any specific school -- he's not an academic theologian in the professional sense, but a man of encounter and practice."

For Pope Francis, "reality has primacy over ideas," Kasper said. And with a focus on the Gospel, he "is intent on overcoming the absence of joy in the church and the modern world."

He "wants to initiate a new beginning for the church," Kasper said, but not by destroying tradition. Rather, "Pope Francis stands in a great tradition, reaching back to the earliest beginnings."

"He does not represent a liberal position, but a radical position, understood in the original sense of the word as going back to the roots, the radix." By reaching back through time, he is, in fact, "constructing a bridge to the future."

At the center of Pope Francis' vision stands the concept of mercy, Kasper said -- "God's mercy."

"Mercy has become the theme of his pontificate," he said. "... With this theme, Pope Francis has addressed countless individuals, both within and without the church." He has "moved them intensely, and pierced their hearts."

And "who among us does not depend on mercy?" Kasper asked. "On the mercy of God, and of merciful fellow man?"

Kasper made note of the fact that Francis is not alone in his emphasis on mercy. He stands "in the tradition of many great saints ... and also in continuity with his predecessors," such as St. John XXIII, St. John Paul II and Pope Benedict XVI, all of whom spoke or wrote on the subject.

"Nevertheless, for some, the pope's talk of mercy has become uncomfortable," Kasper said. "They sense danger lurking behind it."

But "when correctly understood, mercy is not a yielding pastoral weakness"; it is "revealed truth."

"It does not abolish justice, but outdoes it."

"In the center of Pope Francis' understanding of the church stands, according to his Argentine background, the image of the church as the People of God," Kasper said. It is an "ancient" understanding, one renewed by the Second Vatican Council, but one that has come to be viewed with suspicion in the West.

Pope Francis' style is not one of "benevolent popularism," Kasper said. "His pastoral style is based on a whole theology. On the basis of this theology, he's averse to all clericalism. He wants the participation of the People of God in the life of the church. Women as well as men. Laity and clergy, young and old."

"He stresses the importance of the sensus fidei, and says the church must open its ears to the people."

The Catholic church must not be self-centered, Kasper said, but instead a church "on the move." And a church that is an "open house," a church of the open God, "presupposes renewal and reform," he said.

People | Cardinal Kasper: Pope Francis 'does not represent a liberal position, but a radical position'

Reaction of conservative Catholics to abuse summit reveals a lot

Political models for the papacy