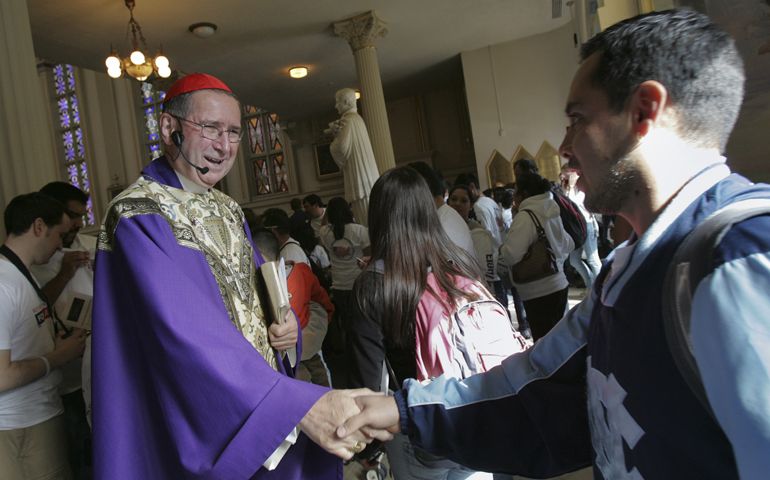 Cardinal Roger Mahony, retired archbishop of Los Angeles, greets people as they arrive for a special Mass for immigrants in Washington in 2010. (CNS/Nancy Phelan Wiechec)
This article appears in the Benedict Resigns feature series. View the full series.

Los Angeles — After the release of damning sex abuse documents that prompted a rare public rebuke from the current archbishop of Los Angeles, retired Cardinal Roger Mahony again finds himself in the spotlight -- this time over his upcoming vote in the conclave to elect a new pope.

Despite allegations of hiding sexual abuse by priests and then being sidelined by current Archbishop Jose Gomez, Mahony remains a cardinal, a priest "in good standing" and under age 80 -- all enough to make him eligible to be one of 11 American cardinals to hold a vote in next month's conclave.

"I look forward to traveling to Rome soon to help thank Pope Benedict XVI for his gifted service to the church, and to participate in the Conclave to elect his successor," Mahony wrote on his personal blog hours after the pope's stunning resignation announcement.

Others, however, aren't so excited.

The left-leaning group Catholics United, which has started an online petition objecting to Mahony's role, said the retired cardinal "should reexamine his priorities and stay home."

"Cardinal Mahony should do the right thing and stay home," the group said. "By putting children in danger, he's lost his ability to have a voice in the Church."

In many ways, Mahony finds himself facing the same criticism directed at Cardinal Bernard Law, who resigned in disgrace as archbishop of Boston because of the abuse scandal but nonetheless got a vote in the 2005 conclave that elected Benedict.

Tradition says an archdiocese should not have more than one cardinal-elector at a time, which means Gomez will have to wait to be named a cardinal until after the 76-year-old Mahony loses his vote in 2016.

Gomez called the 14,000 pages of internal church records full of "terribly sad and evil behavior" and promptly removed Mahony from all "administrative or public duties." But under church law, cardinals are ultimately answerable only to the pope himself, not the local bishop.

The Washington Post slammed Mahony for protecting known abusers, saying he's "lucky not to be in prison" and bemoaning that "his continued prominence reflects the culture of impunity in the Catholic Church a decade after its tolerance and complicity in the abuse of children was exposed."

Manuel Vega, who was abused as an altar boy, told the Los Angeles Times he couldn't understand how Mahony could retain a vote in the College of Cardinals.

"Mahony is going without clean hands," he told the newspaper. "His hands are dirty ... from covering up years of sexual abuse. How can he be part of the conclave?"

But across the sprawling archdiocese, Mahony's vote in the conclave is being greeted by many others with a shrug.

Msgr. Thomas Welbers of the Church of the Good Shepherd in Beverly Hills said Mahony's position as a member of the conclave is just part of the process -- a cardinal is an honorary priest of the diocese of Rome, and he's allowed to join 116 other cardinals to elect the bishop of Rome, he said.

"Voting rights are not determined by how others may feel about the person," Welbers said.

Yolanda Moreno, 53, a parishioner at St. Agnes Church in South Los Angeles, said she isn't bothered by Mahony's position in the next conclave. God knows best, she said, and Catholics should trust in that.

"He has experience after this scandal," she said, noting Mahony's vote carries as much weight as any other cardinal's. "Maybe he could help the other cardinals."

Others were openly supportive of the man who led the nation's largest archdiocese from 1985 to 2011.

Mike Flota, another parishioner at St. Agnes Church, said he was upset about current controversy surrounding the L.A. diocese. But he puts his trust in God's hands and said Mahony is just another sinner in need of forgiveness.

Flota added that Mahony's life experience and vision as a more liberal cardinal would bring wisdom to the conclave.

Fr. James Heft, a professor at the University of Southern California, said there is no basis for Mahony to be stripped of his vote; canon law allows that all cardinals under age 80 -- even ill cardinals -- are required to vote in the papal conclave.

"The scandal weighs heavy on many people," he said. "But he hasn't been asked to leave the priesthood. This is his job."