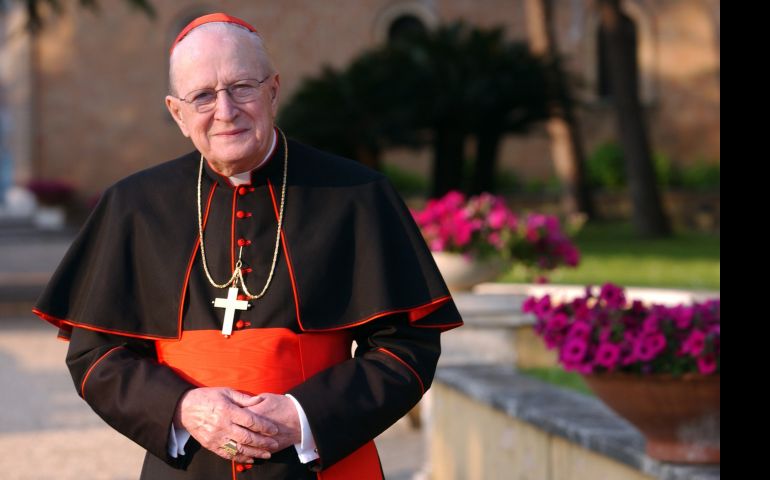 DETROIT — Cardinal Edmund Szoka, who rose from poor beginnings to reach the highest levels of service to the church, died Aug. 20 at Providence Park Hospital in Novi. The cardinal, who was 86, died of natural causes.

His death leaves the College of Cardinals with 210 members, 117 of whom are under 80 and therefore eligible to vote in a conclave to elect a new pope.

A funeral Mass for Szoka will be celebrated Aug. 26 at the Cathedral of the Most Blessed Sacrament in Detroit, with Archbishop Allen Vigneron of Detroit as the main celebrant.

The late cardinal's body was to be received at the cathedral the afternoon of Aug. 24, followed by several hours of visitation. An evening prayer service also was planned. Visitation was to resume at the cathedral Aug. 25, with an afternoon rosary and an evening vigil service.

While his accomplishments were often larger-than-life, Szoka carried lessons learned growing up poor in hard-working Polish-American communities with him as he served as parish pastor, chancery official, founding bishop of a new diocese, archbishop of Detroit and in high Vatican posts.

Then-Archbishop Szoka was installed to head the Detroit archdiocese in 1981. He was named a cardinal in 1988, and was Detroit's archbishop until 1990, when he began a 16-year tenure at the Vatican -- serving under both Popes John Paul II and Benedict XVI.

Retired from active ministry since 2006, Szoka had been living in Northville, and had recently been active again in the life of the archdiocese he once led.

"We mourn the loss of a dedicated shepherd," said Vigneron, the current head of the archdiocese, who had served as a priest under Cardinal Szoka in the 1980s. "For 60 years, Cardinal Szoka gave himself totally to his priestly service of Christ and his church. He has gone home to the heavenly Father with our prayers. May the Lord give him the reward of his labors."

Pope Francis sent a telegram to the archbishop with "heartfelt condolences to you and to the clergy, religious and lay faithful of the archdiocese," recalling the cardinal's many years of "tireless episcopal ministry" to the church in Michigan and at the Vatican. He was a "generous servant of Christ and the church," the pope said.

Szoka considered his greatest accomplishment in the city of Detroit the transformation of Sacred Heart Major Seminary in 1988, according to a 2011 interview during the celebration of his 40th anniversary of episcopal ordination.

And although he headed up one of the largest U.S. archdioceses and achieved acclaim for restoring the financial condition of the Vatican, he pointed to his role in setting up the Diocese of Gaylord in northern Michigan as the accomplishment that meant the most to him personally.

"When I came there, I had no place to live, I had no chancery office, I had no secretary. I had a territory, but none of the facilities I needed," Szoka told The Michigan Catholic, Detroit's archdiocesan newspaper. "God really helped me, because when I think back on it now, it went much easier than you might think."

His episcopal motto -- "To Live in Faith" -- was one the cardinal took to heart.

"It is the perennial challenge the church always faces, strengthening the faith of the people and helping them to live that faith fully and actively," he once said.

Edmund Casimir Szoka was born Sept. 14, 1927, in Grand Rapids to Polish immigrants Casimir and Mary Szoka. His father had immigrated from what is now Belarus; his mother from Poland.

In the 1930s, the Szoka family, including an older sister, Irene, moved to Muskegon as his father sought sufficient work to support the family.

Young Edmund studied at St. Joseph Seminary College in Grand Rapids for two years, transferring to Sacred Heart Seminary College in Detroit for his junior and senior years. He studied theology at St. John's Provincial Seminary in Plymouth Township. He was ordained June 5, 1954, for the Marquette Diocese by Bishop Thomas Noa.

His first assignment was as an associate pastor at a parish in the Michigan's Upper Peninsula, then he served as Noa's secretary and as a hospital chaplain. He also was named chaplain to the former K.I. Sawyer Air Force Base.

In 1957, then-Fr. Szoka went to Rome to study canon law at the Pontifical Lateran University. He returned to Marquette in 1959 and resumed his hospital and chancery duties.

As secretary to the bishop, in October 1962 he accompanied Noa to Rome for the first session of the Second Vatican Council.

In 1963, he was named the first bishop of Gaylord. To fund diocesan operations, he launched the Catholic Services Appeal, forerunner of a successful campaign he would start in the Detroit archdiocese.

He was named to Detroit in 1981. During his tenure he expressed deep concern over the racism and poverty that plagued the city. In 1985, he sponsored Detroit Mayor Coleman Young's membership as the first black member of the all-white Detroit Golf Club.

Then-Archbishop Szoka also had to deal with the financial difficulties of the archdiocese. His other challenges included handling two church discipline cases: one involving a woman religious who had become head of a state agency that paid for abortions among its activities, and the other involving a priest-theologian who had co-wrote a controversial book on sexuality.

In 1987, he hosted his friend and mentor, Pope John Paul, on a visit to Detroit and elsewhere in the archdiocese as part of a major U.S. papal trip.

In 1988, the year he was named a cardinal, he oversaw major changes at Sacred Heart Seminary with the addition of a graduate school of theology, plus a revamping of its undergraduate program and the addition of lay ministry programs.

It also was a year of controversy sparked by Szoka's decision -- after several years of studies and consideration -- to close several dozen parishes in the city of Detroit that had experienced declining membership.

It was one of the first large waves of parish closures in the U.S. After a plan to shutter 46 of 114 city parishes was unveiled, the final number closed was trimmed to 31 in 1989. Another five closed the following year. Outraged Catholics protested, rallied against archdiocesan officials and filed appeals in civil court in Detroit and church courts at the Vatican. Their appeals ultimately failed.

Szoka also presided over pockets of growth in the archdiocese, including the opening of new parishes, including multicultural parishes.

In 1990, Pope John Paul named him president of the Prefecture for Economic Affairs of the Holy See. Faced with a budget crisis, he initiated reforms that stanched a 20-year flow of red ink, and set the course for healthy balance sheets for the rest of his time in the position and for several years thereafter.

In 1997, he was named president of the Pontifical Commission for Vatican City State -- informally the "governor" -- which put him in charge of a wide range of activities such as the Vatican Museums, and the microstate's mint, post office and police force.

Despite such major responsibilities, Szoka said he accepted the appointments with humility.

"When I was in the seminary, my only ambition was to be a parish priest," he said at the time. "But a priest is obedient. I did not go asking for these jobs."

Residing in Northville and aiding local parishes in the following years, Szoka also participated in social and fundraising events to help support the local church.

Contributing to this story was the staff of The Michigan Catholic, newspaper of the Detroit archdiocese.