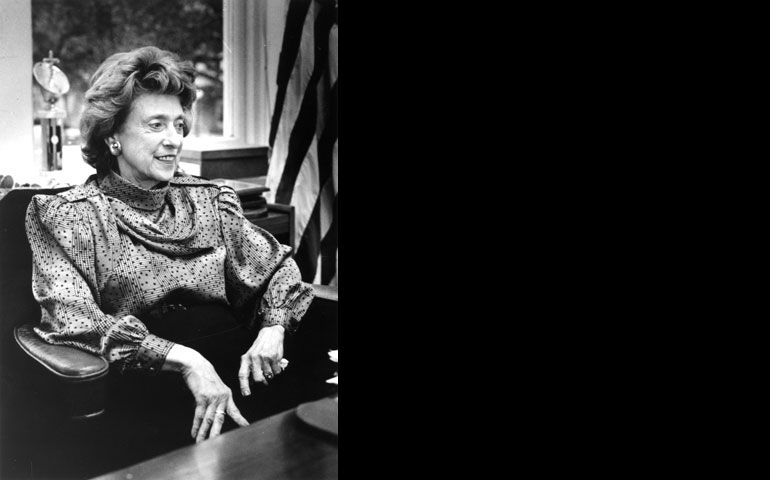 New Orleans — Corinne “Lindy” Boggs, who blazed a trail from her birth in 1916 on a Louisiana sugar plantation to being an eight-time-elected member of the U.S. House of Representatives and U.S. ambassador to the Vatican, was “a strong and loud and constant voice for life,” New Orleans Archbishop Gregory Aymond said at her funeral Mass Aug. 1 at St. Louis Cathedral.

Boggs, who died July 27 at age 97, left a legacy to be admired as a dedicated and genteel wife, mother, grandmother, great-grandmother, faithful Catholic and public servant whose example everyone could use to learn to live their faith, Aymond said.

Calling her a humble leader and a faithful friend, the archbishop said Boggs “believed in the darkest moments in life, God loved her and led her. She placed her life in the hands of a loving God.”

“Lindy lived her faith and was guided by this faith in her family, life in Congress and all her political life,” Aymond said. “She was a strong and loud and constant voice for life, calling on the equality of women in the workplace and in the community.”

Through her words and deeds, the archbishop said, Boggs gave witness that “we are created equal by God. ... We must rid our society of racism and prejudice and hatred and become the family of God that he calls us to be.”

Before she left New Orleans for her final resting place at St. Mary of False River Cemetery in her hometown of New Roads, where her parents and son William Robertson Boggs (who lived 39 hours after birth in 1946) are buried, the roll of the drums was heard as the “Battle Hymn of the Republic” -- “Mine Eyes Have Seen the Glory” -- was sung as her casket was carried down the aisle of the cathedral.

Outside, in Jackson Square, the Treme Brass Band led her hearse in front of the cathedral down Chartres Street.

Being a politician in Washington might not have been an original goal in life for Boggs. But she learned her way, beginning at age 24 when husband Hale Boggs from Louisiana was first elected to the House of Representatives. She took cues from her heroine Eleanor Roosevelt, who was integral to the career of her husband, President Franklin Roosevelt.

Boggs was her husband’s right hand, running his congressional campaigns, his Washington office and serving as a consultant throughout his years as a Democratic congressman until he was lost in a plane crash in Alaska in 1972 while campaigning for U.S. Rep. Nick Begich.

She won a special election to finish her husband’s term and then won re-election eight times. She was the first woman elected to Congress in Louisiana history.

The decision to succeed her husband wasn’t an easy one for her: She considered herself more the “consensus builder” and “peacemaker” among those who didn’t agree with her husband’s votes.

Boggs said she always believed that “civil rights and human rights are intertwined,” something that compelled her to fight for issues that were important to her and her husband. Those issues included voting rights for all Americans and help for women and those in need.

At the top of her list was the Equal Credit Opportunity Act of 1974 that barred discrimination in lending based on age, race, creed, gender or marital status.

Even after she retired from Congress in 1990 to care for her daughter Barbara Boggs Sigmund -- the former Princeton, N.J., mayor who was dying of cancer -- she was a gracious host to many nonprofit fundraisers at her townhouse on Bourbon Street. One cause was Lindy’s Place, which provided temporary housing and supportive services to help homeless, unaccompanied women gain self-reliance.

New Orleans Mayor Mitch Landrieu, who sang “Ave Maria” at the Aug. 1 Mass, heralded her as an oak tree with roots as deep as the nation itself who provided branches to rest on, shade to protect and bountiful fruit. He also said she followed the example set by the Virgin Mary when she accepted being the mother of Jesus with the words, “My soul proclaims the greatness of the Lord.”

“Her entire life fits into the notion ... of serving others in the image of God,” Landrieu said. “The one clear message that came out of all the remembrances of Lindy was not just what she did but how she did it. This was a righteous woman. She was tough. She was smart. She was shrewd. She was persistent, but she was also gracious ... loving and kind, and she was patient.”

He added, “She served and did it in a way that dignified every human being that she ever had in her life. There is a lesson there for me and for all of us in how we can remember Lindy and conduct ourselves … in our private and public affairs.”

[Christine Bordelon is associate editor of the Clarion Herald, newspaper of the New Orleans archdiocese.]

Your thoughts on the dwindling numbers of sisters