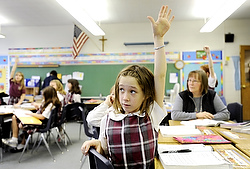 Reports of school closures often point to escalating costs of operating schools coupled with the inability of parents to pay tuition, especially in inner cities, and the lack of available resources from parishes or dioceses to keep these schools afloat.

Schools that are thriving have had to seek other forms of revenue from foundations, local businesses and alumni.

Mary McDonald, superintendent of schools in the Diocese of Memphis, Tenn., knows all about needing money -- and getting it -- to keep Catholic schools open.

In fact, she sought out funds from non-Catholic sources to completely reopen eight diocesan elementary schools that had been closed.

The resurrection theme of these Jubilee Schools in the poorest areas of Memphis came about through multimillion-dollar contributions, foundations, grants, corporate funding and private donations.

When McDonald first started her job as school superintendent in 1998, Memphis Bishop J. Terry Steib told her he wanted Catholic schools back in the city. "He also told me there was no money to do this," she told Catholic News Service Jan. 19.

She knew local Catholics, who made up only 4 percent of the population, could not finance these schools alone, so she turned to the broader community and convinced them that restoring Catholic education in the city was a worthwhile investment.

Since these schools began re-opening in 2000, she has continued her quest for funding and to prove to those who provide financial help -- whom she calls investors, not donors -- that their funds are making a difference. She frequently gives tours of schools and shows their test scores to reinforce the message that Catholic education is improving the lives of the young people it’s serving, which in turn helps the community at large.

When she asks for help, she said, it is never with the mentality of asking for money for a sinking ship. Instead her plea has always been: "Here's our plan, come along with us," which she follows up with proving schools are "worthy of people investing in us" by showing what they do now and their future plans.

As she sees it, the "days of someone being philanthropic because you need money are fading and being replaced by an entrepreneurship philanthropy, which asks, what are you willing to do to make our investment grow?"

Mary Walsh, at the Lynch School of Education at Boston College, echoed this idea, saying it was her impression that "fewer and fewer foundations are willing to provide operating support to Catholic schools."

She said many foundations give student scholarships and some still provide funding for operational costs, but they are more interested in "trying to fund innovative innovation" collaborating with Catholic schools and also working with Catholic universities to strengthen schools' futures instead of just fixing current troubles.

One example Walsh, the Daniel E. Kearns professor in urban education and innovative leadership counseling, cited was funding from the Mathile Family Foundation in Dayton, Ohio. The foundation has been collaborating with a Boston College program that links students, including those at Chaminade Julienne Catholic High School in Dayton, to needed resources in their local communities which has improved grades and deceased absenteeism.

Margaret Dames, superintendent of schools for the Diocese of Bridgeport, Conn., has been keen on tapping into outside resources not just to restore schools but to help them thrive. In 2004, Bridgeport Bishop William E. Lori created a cluster of inner-city schools which was given financial support from patrons and foundations to repair structures and get schools up to speed with modern technology.

The diocese also has had particular success with reaching out to alumni through a grant-funded project called Catholic Alumni Partnership. Some alumni have never been tapped for help and have been happy to be asked, Dames said. Help has come in big and small ways from contributions to enhance curriculum and a recent donation to treat all eighth grade students to a Broadway show.

The diocesan schools office knows it needs funds to keep its mission alive and it's not shy about asking for money. A "donate here" link on a website for the schools asks for patrons in its "Adopt a School" program.

Leaving the busy city for the quiet of the woods

US Supreme Court can strengthen recovery effort for Puerto Rico