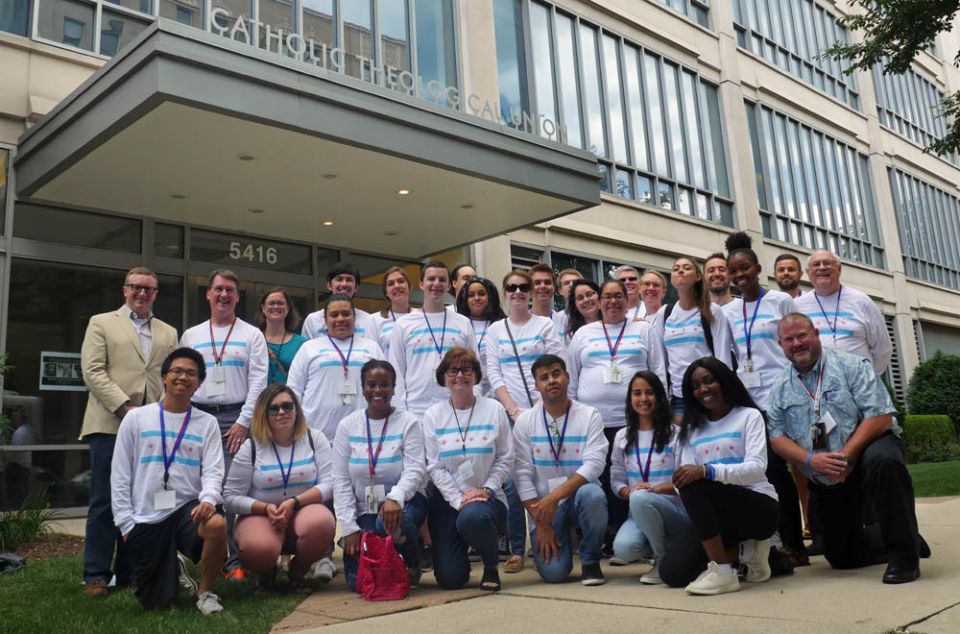 The group attending the Catholics on Call summer program, outside Catholic Theological Union in Chicago (The Bernardin Center/Tim Frakes)

Chicago — For years, Karen Rojas prayed that God would show her what to do with her life. She thought her life's purpose was a puzzle to be figured out.

Although the 25-year-old is interested in photojournalism and studying communication, media and theater at Northeastern Illinois University in Chicago, she realized she is happiest when volunteering as a leader of a youth group in her parish, where she is also a eucharistic minister.

Young people like Rojas — and their decisions about what to do with their lives — will be on the church's front burner this fall, when bishops from all over the world gather at the Vatican for the church's Synod of Bishops on young people, the faith and vocation discernment in October.

But on the South Side of Chicago in late July, a handful of young Catholics were getting a jump on the topic of vocational discernment, with a retreat designed to help them think about a future that may include service to the church. 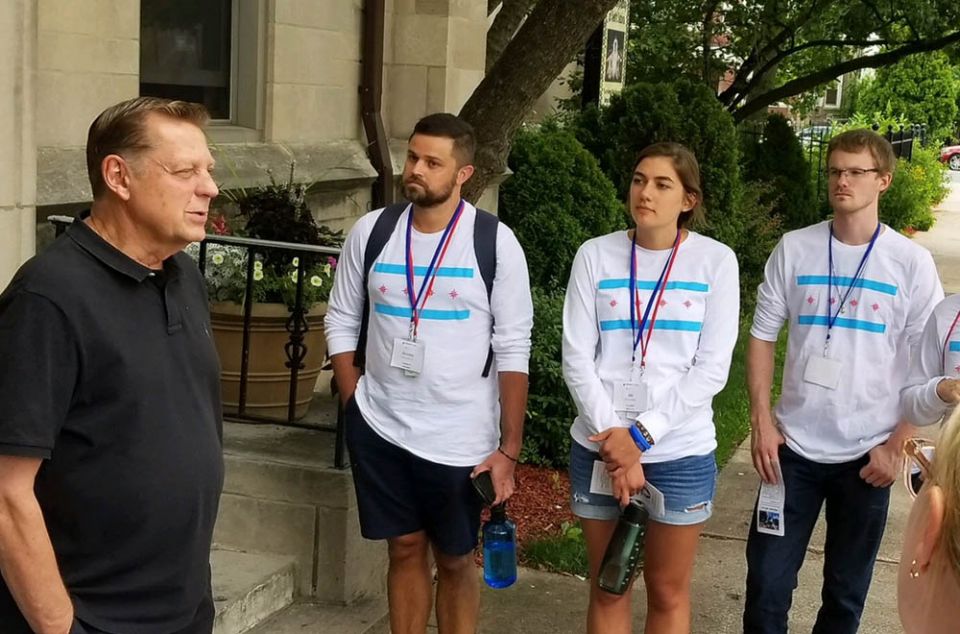 Now in its 14th year, the Catholics on Call program brought together about two dozen young adults, mentors and others July 25-29 for discussion and community around finding direction in life. The event was hosted by the Bernardin Center at Catholic Theological Union.

The retreat helped Rojas realize that "God's will is about what my heart desires," she said. "This is giving me the courage to not be afraid to go in the direction my heart is leading me."

She is now considering the possibility of working for the church. "I learned you can be paid to be an adult minister," she said. "That's actually a job!"

"I learned you can be paid to be an adult minister.
That's actually a job!"
— Karen Rojas

One of Catholics on Call's goals is to expose young adults from diverse backgrounds to the variety of lay ecclesial ministry opportunities in the church. To that end, the retreat included visits to three Chicago-based ministries, where the participants heard firsthand stories of those whose vocational calls led them to work for the church.

In a Chicago neighborhood plagued with poverty, violence, gangs and drugs, formerly incarcerated young men shared how the Precious Blood Ministry of Reconciliation has changed their lives. 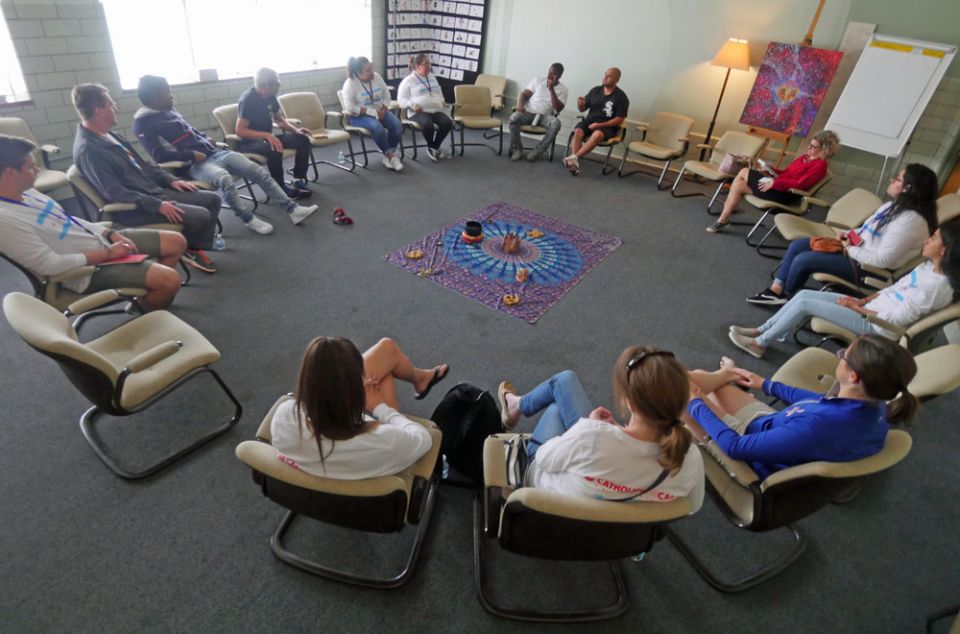 Orlando Mayorga, who grew up in the neighborhood and ended up serving 20 years in prison, now works as a case manager for the program, which helped him reconnect with his faith. Mayorga is committed to "taking people who have been harmed in some way and helping them to find healing," he told the Catholics on Call group.

One retreat participant asked how he could use his privilege to help address the problems the young men faced. "Well, Jesus said go and sell everything, give it to the poor and come follow me," said Precious Blood Fr. Denny Kinderman, spiritual adviser and youth counselor for the Ministry of Reconciliation.

After some nervous laughter, Kinderman clarified that young people should discern what moves them. "Then feed that passion and see where it leads you," he said, adding that in his 51st year of priesthood, "I'm here because I love it."

Some of the Catholics on Call participants are considering priesthood or religious life, although the program defines "ministry" broadly and tries to focus on lay ecclesial ministry. "I hope the synod can also see the equality of lay ministry, religious life and priesthood," said Divine Word Fr. Stephen Bevans, faculty advisor to the program.

Still, a majority of the program's "partners" are religious communities of priests, brothers and sisters.

Kiara Murphy, 23, is "100 percent sure" she wants to do ministry, likely as a religious sister. "It's a good fit," said the Arizona native, who did a year of service with the Sisters of the Good Shepherd after graduating from Arizona State University.

The retreat has made her more certain that "being a sister allows me to better serve and love others," she said. "It's been a good opportunity to talk to people about religious life because I didn't find many opportunities to do so with anyone else."

The former model and brand ambassador for a liquor company said she is happiest when working with trafficked young women in New York, through a ministry of the Good Shepherd sisters.

Being able to talk with other young people who feel the same way is key. Catholics on Call participants are between 19 and 33 years old, and from all over the country. Many have been encouraged to attend by campus ministers, vocation directors or word-of-mouth from friends. Over the years, 40 retreatants have decided to pursue graduate studies at Catholic Theological Union. 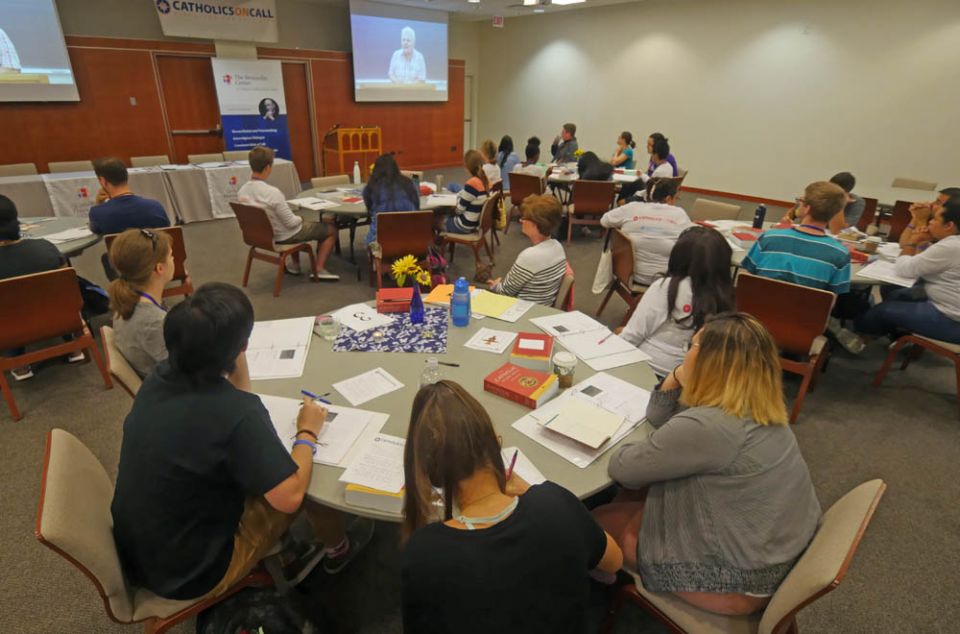 "Many of them are seekers," said Peter Cunningham, program coordinator for Catholics on Call. "We try to bring them together with their peers, since many of them feel alone on their campuses. Our purpose is to build communities and to inspire leaders in parishes."

Speakers at the retreat talked about prayer, Scripture and grace in the context of vocational call. St. Joseph Sr. Sallie Latkovich, in a video-conferenced presentation, stressed the importance of spiritual mentors and friends who challenge you to go deeper.

That resonated with Brody McCurdy, a 20-year-old from Sarasota, Florida, and student at Davidson College in North Carolina. He may pursue graduate studies to teach linguistics at the college level, but he is also considering working for the church.

"I feel like I want to do something more," he told NCR. Although he has received plenty of career advice, the Catholics on Call retreat has offered a faith perspective he hasn't gotten elsewhere.

"Something I've learned is that it's OK to not know and just trust," said McCurdy, although he admits that it would be easier for him if his vocation were "all mapped out."

"Knowing there's not a plan can be difficult," he said. "But it's OK to rest in that ambiguity and trust in the 'not knowing.' "

"Not knowing" about career and vocation seems to be common among younger Americans. A recent survey of millennials and members of Gen Z found that 43 percent expect to leave their jobs within two years, and only 28 percent are looking to stay beyond five years. That study also found that millennials want to work for organizations that improve society.

Steven Tran, a 19-year-old accounting major at the University of North Carolina at Charlotte, is minoring in philosophy and serves as a catechist in his parish. He has often wondered if he is on the right vocational path, so he appreciated the chance to consider his future in light of his faith at Catholics on Call.

A version of this story appeared in the Aug 24-Sept 6, 2018 print issue under the headline: Catholics on Call helps young adults learn, discern about ministries .