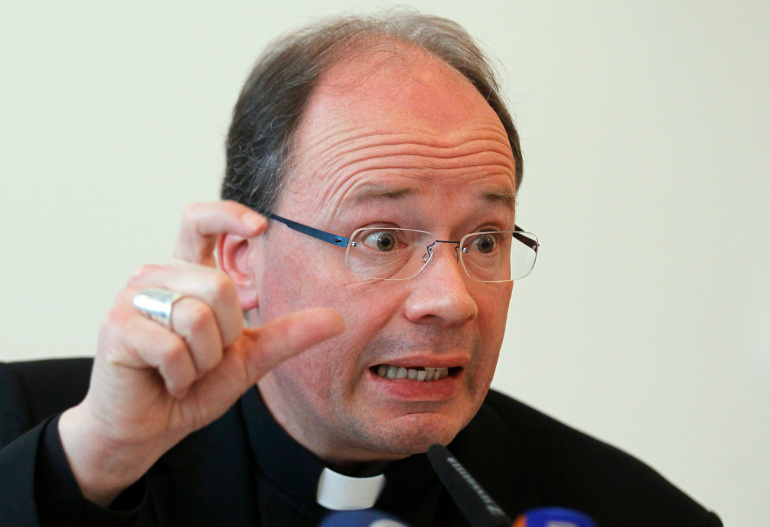 Bishop Stephan Ackermann of Trier, Germany, a representative of the German bishops' commission for the investigation of allegations of sexual abuse of minors, gestures during a Jan. 17, 2013 press conference in Trier. (CNS/Reuters/Wolfgang Rattay)

The responses to the Vatican questionnaire on the family are a clear signal that certain changes concerning the church’s teaching on sexual morality are imperative, according to Bishop Stephan Ackermann of Trier, Germany.

Interviewed by the Allgemeine Zeitung Mainz, Ackermann, 50, said the responses showed “quite clearly” that for the majority of the faithful the church’s teaching on moral sexuality was “repressive” and “remote from life.” Declaring a second marriage after a divorce a perpetual mortal sin, and under no circumstances allowing remarried divorced people ever to receive the Sacraments, was not helpful, he said and added, “We bishops will have to make suggestions here. We must strengthen people’s sense of responsibility and then respect their decisions of conscience.”

It was also no longer tenable to declare that every kind of cohabitation before marriage was a grievous sin, and “the difference between natural and artificial birth control is somehow artificial. No one understands it I fear,” Ackermann said.

As far as homosexual relationships were concerned, the church would have to appeal to people’s sense of responsibility, he continued. “The Christian concept of the human being emanates from the polarity of the sexes but we cannot simply say homosexuality is unnatural,” he explained. While the church must “hold fast” to the uniqueness of marriage between a man and a woman, it could not just ignore registered same-sex unions where the couples had promised to be faithful to and responsible for one another.

Ackermann was sharply criticized by Bishops Heinz Josef Algermissen of Fulda and Konrad Zdarsa of Augsburg.

For an individual bishop to react to the responses of the questionnaire on his own was “counterproductive,” Algermissen, 71, said. “I don’t hold with the normative strength of facts. Truth is not something that can be adjusted,” he insisted but went on to admit, “We bishops obviously have a problem. We have clearly not succeeded in putting across Catholic sexual ethics and its positive concept of the human being.” Decisions on such matters were, however, the world church’s concern and not the concern of an individual bishop or bishops’ conference, Algermissen emphasized.

Zdarsa, 70, recalled that the Catholic world catechism was “the yardstick for valid Catholic teaching. As a diocesan bishop, I see no reason to go against this World Church consensus. I never thought, however, that I’d have to explain this publicly to a brother bishop one day,” he said.

But the Bishop of Magdeburg in former Eastern Germany, Gerhard Feige, 63, came out in defense of Ackermann and sharply criticized the bishop’s critics. He agreed with Ackermann’s views on the responses, Feige told KNA, the German Catholic news agency. “The time has finally come to face naked reality. We must struggle to find fair, responsible and life-serving solutions in the spirit of Jesus Christ. It is not helpful to keep on repeating prohibitions or reservations,” Feige underlined.

Fr. Eberhard Schockenhoff, 62, professor of moral theology at Freiburg University, a member of the German National Ethics Council and one Germany’s best-known moral theologians, said he and 19 other theologians had responded to the questionnaire together and their responses were congruent with the responses of the majority of the faithful in Germany. The responses showed that there was a huge discrepancy between the church’s teaching on sexual morality and what Catholics actually practiced. The responses moreover confirmed what he and many other priests had long since experienced in their daily practice as priests.

Schockenhoff recalled that Pope Francis himself had initiated the questionnaire as he wanted as broad a spectrum of world opinion as possible. “I now expect a clear signal from the Pope that the bishops will be able to discuss these concerns freely and openly at the Synod. Up to now, Episcopal Synods have always been centrally steered. Francis must make it clear that he wants the bishops to help him formulate the Church’s teaching on the family, marriage and sexuality in such a way that the faithful will find it helpful,” Schockenhoff said.