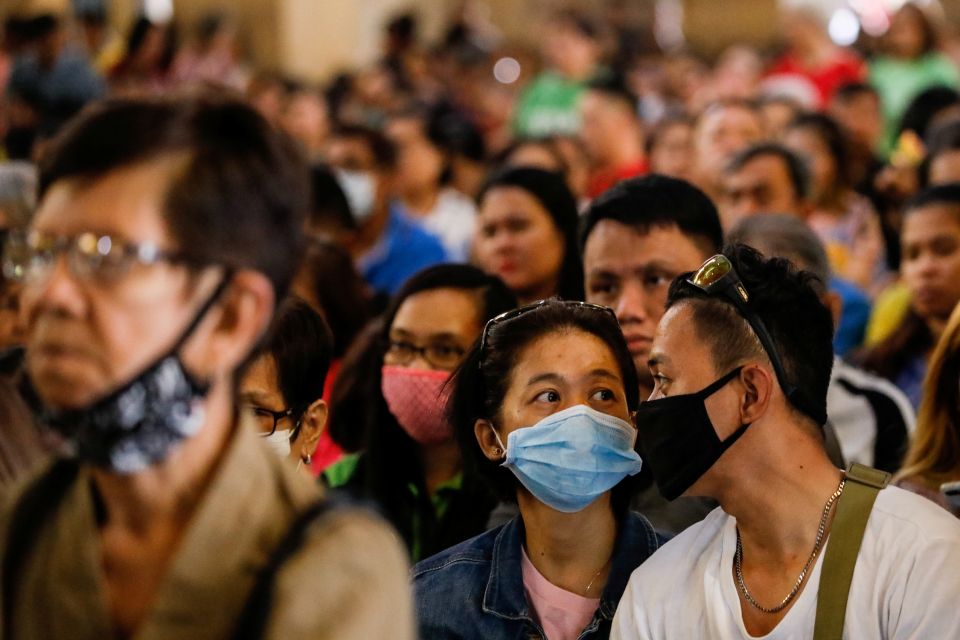 A couple wearing protective masks attend Ash Wednesday Mass at the National Shrine of Our Mother of Perpetual Help in Manila, Philippines, Feb. 26, 2020, amid the coronavirus outbreak. The Archdiocese of Manila canceled all public Masses March 14-20. (CNS/Reuters/Eloisa Lopez)

Washington — In an effort to stem the pandemic of COVID-19, bishops' conferences and dioceses around the world began suspending public Masses.

On March 12, the bishops of Quebec canceled all weekend Masses across the province until further notice. The step was taken in response to measures announced by the Quebec government to combat the spread of the coronavirus, including limiting public assemblies to fewer than 250 people.

The bishops said they wanted to "contribute to this joint public health effort and act in solidarity with the authorities."

"Given the impossibility, in many places, of managing the limit of 250 people gathered, also considering that many of our parishioners are over the age of 65 and are therefore more at risk of contracting the virus," all weekend Masses were canceled, said a statement from the Quebec Catholic bishops.

Churches were to remain open for small gatherings and for personal visits, but parishioners were encouraged to view Mass on TV, pray at home and read Scripture.

Several archdioceses and dioceses in the United States — including Seattle, Chicago and Washington — made similar closures. Along with the suspension of Masses came a dispensation of the Sunday obligation. Some dioceses continued to offer Masses, but encouraged anyone with a compromised immune system, especially the elderly, to remain home.

In Ireland, most public Masses were canceled after the government insisted that indoor gatherings of more than 100 people must not take place.

The Irish bishops' conference said March 12 that some smaller Masses could continue during the pandemic if the congregation is limited to fewer than 100 people. It also announced that all Irish Catholics have been dispensed from the obligation to attend Sunday Mass.

In Manila, Philippines, Bishop Broderick Pabillo ordered the cancellation of public Masses from March 14-20, reported ucanews.org. His announcement followed one by Philippine President Rodrigo Duterte placing Manila in a citywide lockdown to fight the virus.

Ucanews.com reported that for those seven days, church bells in Manila Archdiocese would toll at noon and at 8 p.m. to call on all people to pray special prayers to fight COVID-19. In addition, families were expected to gather at 8 p.m. each day to pray the rosary and read the Bible.

In China, where the number of COVID-19 cases was decreasing, a bishop asked Catholics to continue to avoid public gatherings and cautioned against a new wave of unacceptable online prayer programs, ucanews.com reported.

Bishop Peter Fang Jianping of Tangshan particularly warned against the preaching of one priest, Fr. Fei Zhisheng, who maintains that illness is a result of sin.

"Some of the teachings of Father Fei are not in line with the Catholic faith, and everyone is reminded to stop sharing information about Father Fei," Fang said.

Fei of Liaoning, in northeast China, specializes in training church ministers. In 2007, he founded a retreat group and trained preachers across the country.