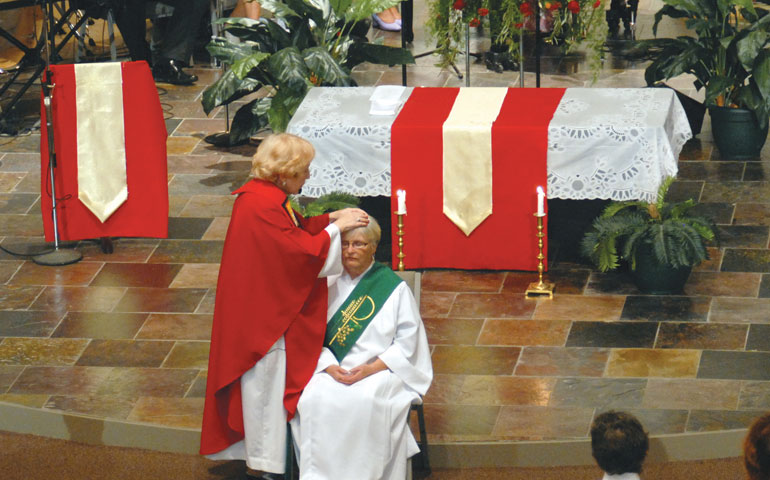 Diane Dougherty, 67, who has short silver hair and stands barely 5 feet tall, became a fleeting media sensation Oct. 20 with her ordination in the Association of Roman Catholic Women Priests.

The forces that drove Dougherty to profess priestly vows are a parable of today's church, as divided in America as in Europe, where 144 theologians in Germany, Austria and Switzerland signed a 2011 declaration defying Pope Benedict XVI in support of women's ordination. Dougherty, who spent 23 years as a nun earlier in her life, followed a pull of conscience to "the same basic calling" in violation of church law.

Five other women, well along the road of middle life, were ordained as deacons in the same Mass held at First Metropolitan Community Church, which historically serves gays and lesbians. Bridget Mary Meehan, a bishop affiliated with the Association of Roman Catholic Women Priests, came from her home in Virginia to preside. About 300 people attended, among them relatives of the newly ordained, a few scampering grandchildren; groups from Florida, Georgia, Ohio, Kentucky and Louisiana; 15 other women priests in the movement; and two women in black robes of the Episcopal clergy.

The ceremony was the latest held by the association. Since 2004 when a male bishop, who has remained anonymous, ordained seven women on a ship in the middle of the Danube River, about 100 women have joined the movement in America and about 150 worldwide. Unlike the male hierarchy, the association is decentralized. The women hold liturgies in homes, on college campuses and in non-Catholic sacred spaces; they have small teaching and outreach ministries.

The official church has not accepted them. "I can say I'm the queen of England and it doesn't make it so," Mercy Sr. Mary Ann Walsh, spokeswoman for the U.S. Conference of Catholic Bishops, told the Atlanta Journal-Constitution.

Popes John Paul II and Benedict XVI have banned even the discussion of women priests. Benedict has said John Paul's prohibition on women priests is infallible teaching, though some church scholars dispute it.

"There is a hitch, though," said canonist Dominican Fr. Tom Doyle. "Automatic excommunication basically means that it is not publicized. Only the excommunicated one knows it for sure and is obliged in conscience to observe the penalty. … Most of the women priests I have helped were concerned [about the excommunication] and then got to the point -- a healthy one, I think -- where it did not matter."

The same Congregation for the Doctrine of the Faith document singles out clerics who molest children "to be punished according to the gravity of his crime, not excluding dismissal" from the priesthood. In 2006 the Vatican ordered the Legion of Christ founder, Fr. Marcial Maciel Degollado, a notorious pedophile who fathered children with two women, to "a reserved life of prayer and penitence." Maciel, who died in 2008, was never excommunicated.

The Legion, which now functions under a unique Vatican receivership, faces a lawsuit in Connecticut over alleged incest by Maciel. Another lawsuit in Rhode Island, accusing the order of defrauding a widow of $60 million, was recently dismissed; the complainant is considering an appeal.

With the Legion selling real estate in the Northeast, Atlanta has become its most important geographic center in the U.S. Fr. Luis Garza, who was formerly the vicar general and second in command in Rome, is listed on the Atlanta roster as "territorial director" for North America. Legion priests run the archdiocesan retreat center, a school and a parish. Regnum Christi is active in many Atlanta parishes. Under Archbishop John Donoghue's 1993-2004 tenure, Regnum Christi members staffed key archdiocesan offices.

In 1997, the Atlanta archdiocese hired Dougherty as director of early childhood/elementary catechesis. She soon recoiled from Regnum Christi's tactics of psychological coercion and its enormous focus on fundraising and the luring of wealthy supporters.

She sought help from Atlanta priests, to no avail. In summer courses at Boston College for a master's in theology, she wrote papers detailing the steamroller tactics. She wrote memos to Atlanta priests raising alarm bells.

She lost her job in 2001 under a restructuring by the senior administrator, a Regnum Christi deacon who has since retired. Documents Dougherty provided NCR confirm that she negotiated a 14-week severance check and letters of recommendation.

The archdiocese's director of human resources, Zoe A. Johnson, was sacked not long after Dougherty. She wrote Dougherty in 2003: "So many have suffered because of this tyrannical administration." The letter from Johnson, who has since died, continues:

Fear dictates actions and decisions. The pleas of help I received regarding dismissals subsequent to my [departure] are astonishing. My sincere sympathy goes out to those wonderful people whose futures and faith have been shattered. I pray the blood-bath is over. … The administration and fundraisers have brazenly deceived the Catholic community.

With a master's degree in education and years of experience as a teaching nun, Dougherty landed a job as a Georgia public school teacher in 2001. Last year, she retired on Social Security and a modest pension from the Georgia schools. After the Association of Roman Catholic Women Priests correspondence courses and personal sessions with leaders of the movement, she moved toward ordination.

Dougherty grew up in a large family in Painesville, Ohio. "Dad quit school in eighth grade. He worked on a railroad and in his brother's bar," she recalled. "Mother graduated high school. They pounded into our heads: Get an education. I sang the Latin Mass in choir. My two sisters and I had scholarships for high school at Villa Angela Academy in Cleveland -- 60 miles, three buses each day. I had Ursulines there, but when I graduated I joined the Sisters of Humility, who taught me in elementary school. They were happy, they laughed." When she was laid out with a back injury at age 14, making up lessons at home, those were the nuns who visited her.

She entered the Sisters of Humility convent in Villa Maria, Pa., in the fall of 1963, a year after the opening of the Second Vatican Council. "I'd never experienced an atmosphere so bright and intellectually stimulating," she continued. "The process of change had begun before I got there. The nuns wanted a renewed community. There was lots of conversation with sisters who did not want to change. We studied, prayed and voted, reaching a consensus" for greater social outreach.

She attended St. John's College in Cleveland, and in 1967 she began teaching at a largely white, blue-collar parish, Blessed Sacrament, with 48 students in a class. "They were very tough children. Two years later I went to a parish in Bay Village [Ohio], which was middle to upper class, with only 37 children in the class. The contrast was amazing."

The sisters at Blessed Sacrament, she recalled, "were my mentors. I was the youngest nun at 23, the oldest was 37. We visited the homes of children if needs arose."

Of the 25 women with whom she made final vows, five are left. Several died; most, like Dougherty, became disenchanted and left.

In summers off from teaching she earned a master's degree in education with extra courses in counseling, dyslexia and family education. After five years of parish work in Pittsburgh, in 1980 she went back to her hometown and her old parish grade school, St. Mary's. One night a teacher showed up at the door of the four nuns, asking for a meal. "Her salary didn't cover enough at the end of the month to eat," Dougherty said. "The pastor hired two teachers with far less experience but was paying them more than other teachers in the school with more experience. ... He said if we didn't like his decision, we could leave."

The sisters' superior appealed to Cleveland Bishop Anthony Pilla, arguing that the pastor failed to follow the diocesan salary scale, to no avail. After a 107-year history at the parish, the sisters left. "Parishioners were upset with us for leaving but we could not tell them why -- a devastating lesson about power," Dougherty said.

She went back to Blessed Sacrament in Cleveland, which had become a magnet for Mexican and Salvadoran immigrants, in a community of 11 socially conscious nuns. The sister doing Hispanic ministry ran afoul the pastor. "It was a collision of class and culture, clerics and sisters," Dougherty said. "People who donated to the parish did not want the ministry." The pastor ordered the nun in Hispanic ministry to leave. All 11 left in solidarity.

In 1983, Dougherty took a job as a family life minister in Lithia Springs, Ga., organizing religious education. Then the priest who hired her was transferred; the new pastor resisted the idea of lay leadership. As people resigned, he offered Dougherty a contract, but she refused. "His actions were simply too harsh toward dedicated laypeople," she said.

The impact of three trampling pastors caused her to leave religious life in 1987. "My superior and I wept," she recalled. "I told her that my first 12 years as a sister were happy, working for institutions the nuns operated. Then I had to work for priests and had no voice: The parish belonged to the pastor. Sisters of Humility of Mary revised their constitution under Vatican II and Rome approved. We were a Gospel voice to people we served."

In 1987 she moved to Marietta, Ga., working in a progressive parish as a teacher and family life minister. She flourished. In 1997, the Atlanta archdiocese hired her to oversee catechism and early childhood classes.

In 1999, the archdiocese sold a private Catholic school, Donnellan, to the Legionaries for $8 million. Gerald Renner reported about the Legion's takeover of the Atlanta school for NCR in 2000. Four Donnellan staffers were fired for resisting the Legion methodology. Police marched them from their offices during school hours. The guidance counselor had refused Legion Fr. John Hopkins' order "to report on confidential conversations she had with students" and "to provide Hopkins with weekly lists of meetings with students and tell him what they said," Renner wrote.

The ex-employees sued, eventually settling out of court. As many parents withdrew their children, the renamed Holy Spirit Academy nevertheless enjoyed resurgent attendance, thanks to Regnum Christi fundraising.

As Donoghue gave the Legion and Regnum Christi greater authority in his archdiocese, Dougherty saw people around her getting fired or leaving under duress.

It was that "series of collisions with clericalism, a culture I didn't know existed," that put Dougherty on the path to the priesthood, she told NCR. "I have priest friends, very good men, passionate about the church, who would never mistreat people. But if you take someone's son, and put him in that clerical culture, he becomes less human.

"When I was put in my role as a young nun, I was put back into humanity. We were expected to grow with humanity as people of God; God is part of all of us. Clericalism is a spreading virus, an internal illness in the body of the church that affects the well-meaning clerics who are forced against their consciences to go along with what they know is wrong. Women's ordination is a prime example. Many priests will not even enter into a discussion because the pope says no. Their underlying fear is loss of pension, their good name, no place to go in clerical society. They are loaded with fears."

On Oct. 20, the women who gathered in Atlanta professed their vows and family members and members of the community laid hands upon them.

"Fifty years ago I walked with Pope John XXIII," said the new priest to the people gathered. "I am Diane Dougherty and the doors of our church and clergy are open for all."

A version of this story appeared in the Nov 9-22, 2012 print issue under the headline: A women's journey toward ordination.