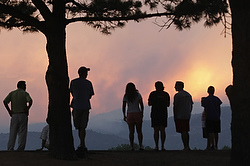 Sr. Jeannette Kneifel was in the convent house chapel June 26 when she saw the fire that would drive the Sisters of St. Francis of Perpetual Adoration, St. Joseph Province, from their home high in the foothills of Colorado Springs, Colo.

"I saw it burst," she said. "I saw it come over the ridge and just explode."

Kneifel, a small woman in a leaf-patterned jacket, shook her head.

"Fires don't run down the canyon; fires go up the canyon," she said. "Heat rises. It was an anomaly. Like the fire that killed those firefighters near Glenwood Springs."

The sisters had been watching the Waldo Canyon fire since it began on a Saturday afternoon, June 23.

"We had our evacuation plan," Kneifel said. "And I had told Sr. Nadine Heimann [the superior of the community] that if we had enough cars to get all the sisters down the hill, I was going to go and help Bob and Linda*."

Kneifel helps run Women Partnering, an organization in Colorado Springs that the Sisters of St. Francis began in 1998 to work with "women and their children who cannot meet at least one basic need without outside help."

"The thumbprints of the Gospel are all over this," Kneifel said, sitting in the house near downtown Colorado Springs where she works. "It's our Franciscan charism. We have partnering at our core. One is not lesser than nor greater than another. That's what community is all about, that's what it does: It lets us be partners, working together toward our goals."

Partnering on that fiery Tuesday meant Kneifel would go to the home of her longtime friends and colleagues, Bob and Linda, and try to bring them to safety.

Now retired and afflicted with the ills of old age, Bob lives with Linda in a house they built near the grounds of Mount St. Francis.

"I went down the hill to the cemetery. I prayed. I asked Mother [Venerable Mother Maria Theresia Bonzel, their foundress] to pray for us. I asked the sisters to pray for us. To intercede. I asked God to help us. Because I just knew this fire wasn't going to stop," Kneifel said.

As Kneifel made her way down the hill to Bob and Linda's house, the other sisters were loading suitcases into cars, helping their elderly sisters with the lifting and carrying.

"I told the sisters to pack for three days," Heimann said, laughing. "I should have said 10."

Heimann is sitting in what was a surgical waiting room in Penrose Community Hospital on the east side of Colorado Springs. The hospital closed four years ago. Now, only a small urgent care operation occupies a corner of the building.

The industrial carpeting in the hospital is stained. The air stills smells of antiseptic. Informational folder stands are empty. A plaque with the names of long-serving hospital volunteers leans against a wall. Arrows taped on the hallway floor lead visitors to the old surgical area where a piece of typing paper held in place with masking tape announces in black Magic Marker: "St. Clare's Convent." A hand-drawn arrow points west.

Underneath that piece of paper hangs another. In the same lettering, with an arrow also pointing west, it says, "Convent guests." The sisters who left with the clothes on their backs and did not have food for dinner that Tuesday night or breakfast Wednesday morning are ready to welcome others.

The traditional term is hospitality. Kneifel said she now understands it as "smashing the myth of self-sufficiency."

"One of the first things we learned at Women Partnering we learned from the women themselves," she said. "They said, 'Please don't call us poor. That's not my name. That's not her name. We have names.' "

Kneifel said these women are "financially vulnerable." And, she continues, "this is what the fire has shown us. We -- all of us -- are or will be vulnerable. We will all be poor. And the women we help are reaching out now to help us." 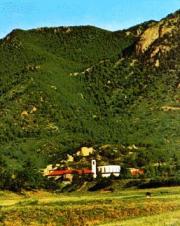 When I walk into the common room of the makeshift St. Clare Convent, the sisters are at lunch. Heimann rises with a smile to greet me. A tall, lean woman dressed in a cotton skirt and blouse and sandals, Heimann shows me the facilities. They have no kitchen and no laundry, though she tells me they did get the cots in the ward switched out for beds. In a community of aging women, she says, that is a great gift.

Heimann sees gifts everywhere. She praises the firefighters and police who helped the sisters transfer the 104 residents of their nursing center into ambulances for the drive away from the fire.

"So many police and EMTs came to help us that we had to turn away 30 ambulances," she said.

She praises the local hospital and long-term care facilities that opened their doors to these frail guests. And, she says with a laugh, she doesn't know whether to thank or scold the kitchen staff that endangered their own lives preparing and delivering snacks for the departing nursing home residents.

"Here they came, running down the driveway with cold drinks and snacks," she said. "The staff wasn't going to let them go without their afternoon snack."

"We were off the property in 45 minutes," Heimann said.

Kneifel stood in Bob and Linda's driveway confident the sisters were well on their way.

"I could hear the sirens," she said. "I could see people outside their homes, lifting boxes and checking the sky. They worked in silence. I could smell the land burning. Ash was falling. The sky was orange. I prayed. And I thought, 'Well, at least the sisters will all soon be safe.' "

Although it is only three or four miles from Mount St. Francis to the on-ramp of Interstate 25, Heimann and the other sisters in their caravan could not move. The short journey to the highway would take three hours as fleeing residents clogged the narrow, twisting Woodmen Valley Road.

Heimann said she looked back and saw the ambulances caught in the traffic. She took her cellphone and called one of the EMTs.

"I said, 'Turn on your lights and move onto the shoulder. Get out of here,' " she said.

As the sisters watched the ambulances pass them, they settled in to wait, moving forward feet at a time.

Kneifel could not see the sisters' cars stalled on the road. And she soon lost cellphone reception. In Bob and Linda's house, the confusion of the fire only added to the confusion caused by the challenges of old age and disability. Bob did not want to leave. He refused to leave.

One hour passed, then two, then three. Smoke filled the air and the fire continued its downward path.

Kneifel spoke to a neighbor putting household belongings in his car. The neighbor gestured toward a young man in shorts. "That's my son," he said. "He's a policeman. Talk to him."

The policeman asked for time to get the family cars packed. Then, he said, he would help.

Kneifel said she believes it was a combination of Linda's quiet urging and the young policeman's calm, official demeanor that helped convince Bob to leave his house. She remembers the officer walking with Bob to his car. Once he had gotten in the seat, Kneifel leaned in and said, "Thank you, Bob. I know this is the hardest day of your life. Thank you for getting in the car."

She shook her head. "On some level," she said, "he understood that if he left that house, chances are he wasn't coming back. I worry that we will lose some of our elderly who are just too traumatized by the move."

The three of them, friends and survivors, began the slow drive to Penrose Community Hospital, where sisters were waiting for them.

Back at the temporary convent, Sr. Stephanie McReynolds was transforming a conference room into a chapel for adoration and prayer. The Blessed Sacrament had evacuated with them, and they were preparing a home for Christ.

Heimann was addressing the laundry. Friends had volunteered to take dirty laundry and wash it.

"So, sisters," she said, "We're back to the old convent days. If you want the underpants you put in the laundry back from the laundry, you'd better write your name on each pair."

The morning after the evacuation, Kneifel was back at the office of Women Partnering. Sr. Marilyn Uhling and Sr. Clarice Gentrup were there helping, too. Sr. Judith Schaeffer had moved her counseling practice from the now-abandoned Mount to an office downtown. Preister was arranging for food to be delivered and served.

Schaeffer met clients who wanted to know how they could help her. "If St. Francis is burned," one told her, "I'll come help you build it back."

The messages, without exception, were offers of help and expressions of concern.

One message came from P.: "I'm wondering what I can do to help. I've got toys for children, clothes. All I ask is that no one be charged for anything."

T. called Tuesday afternoon to say, "I hear you guys need some help. I'm trying to get a ride up there to help you. I love you guys."

A. called to offer her services as a nurse and, she said, "I won't charge you."

Kneifel pushes a button. She says, "Don't let me delete any of these." She listens to another familiar voice and says, "People smack dab in the middle of their own challenges and they reach out to us. That's what a network does. It lets you help me, just as I help you."

"You see?" she asks me. "Now we are the poor and they are helping us. Someday, in some way, we will all be the poor. But that's not our name."

She gestures toward the phone. "And it isn't theirs."

[Melissa Musick Nussbaum lives in Colorado Springs, Colo. She is co-author, with Jana Bennett, of Free to Stay, Free to Leave: Fruits of the Spirit and Church Choice and writes the column My Table Is Spread for NCR.]

After prison, a special scholarship gets women back to class