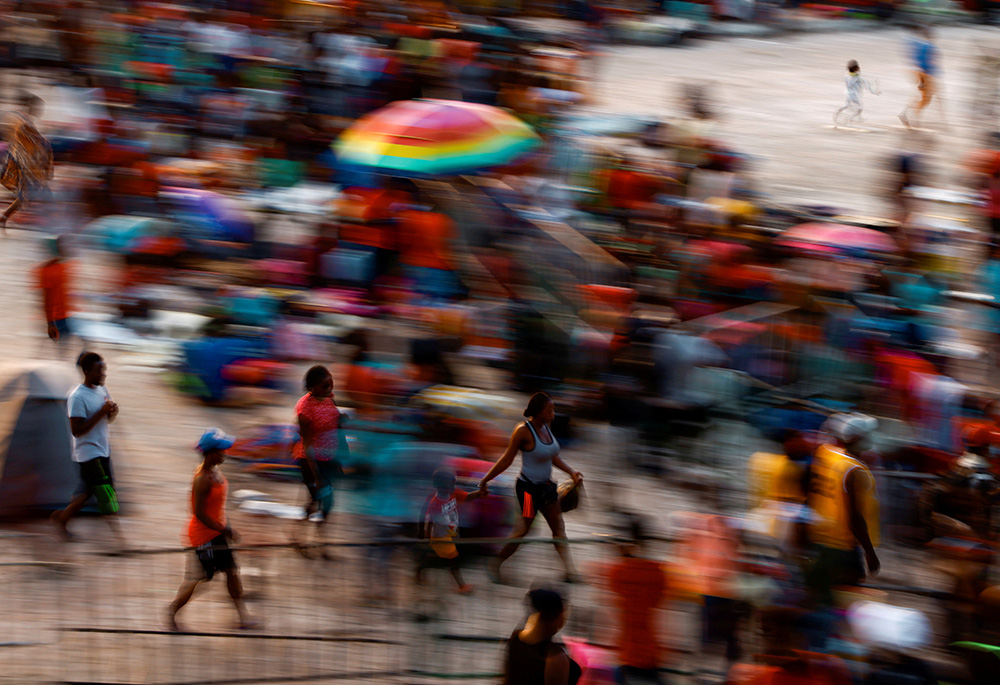 Migrants in Tapachula, Mexico, wait in a stadium Dec. 3, 2021, as they hope to receive help from the Mexican government to obtain humanitarian visas to transit Mexico. (CNS/Reuters/Jose Luis Gonzalez)

A range of prominent Catholics are criticizing CatholicVote, a controversial Michigan-based conservative nonprofit, for what they see as a cynical ploy to attack President Joe Biden's record on immigration by casting aspersions on Catholic agencies that assist migrants near the southern border.

Brian Burch, president of CatholicVote, said in a mass email on Feb. 9 that his group is suing the Biden administration for communication records between federal agencies and Catholic nonprofits in southern Texas to understand how church-affiliated agencies may be contributing to the "chaos" at the border.

"American Catholics deserve to know the full extent of the U.S. government's role in funding and coordinating with Catholic church affiliated agencies at the border, and what role these agencies played in the record surge of illegal immigrants over the past year," Burch said in a separate prepared statement.

Those comments and CatholicVote's lawsuit drew sharp responses from observers like Kim Daniels, co-director of the Georgetown Initiative on Catholic Social Thought and Public Life.

"Those serving the voiceless and vulnerable at the border deserve prayers, support, and gratitude, not partisan attacks," Daniels wrote on Twitter. She added that it was "just awful" for CatholicVote to be "fundraising by stoking fear and suspicion around the vital and life-giving work" of agencies such as Catholic Charities of the Rio Grande Valley and its executive director, Missionary of Jesus Sr. Norma Pimentel.

Pimentel told NCR that is "outrageous" for anyone to suggest that her agency's work is driving up illegal immigration.

"I can assure you [migrants] are not uprooting themselves to come to our Respite Center so that they can take a bath and have a meal or sleep on a mat. They are leaving dire circumstances back in their home countries, risking everything to come here with the hope that they can find a safe place to raise their families," said Pimentel, who added that her agency's mission is to offer a humanitarian response aimed at restoring human dignity.

"There is nothing wrong with feeding the hungry and providing care for those here in our country," Pimentel said. 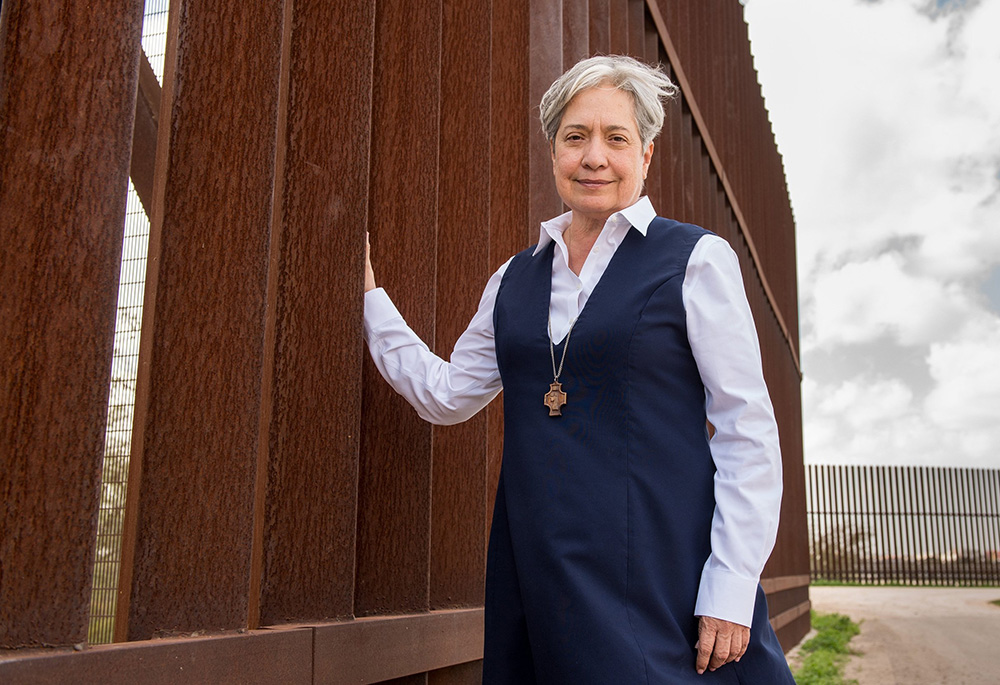 Sr. Norma Pimentel, a member of the Missionaries of Jesus, is pictured along a border wall between Texas and Mexico in late February 2018. (CNS/Courtesy of the University of Notre Dame/Barbara Johnston)

"Will a bishop stand up to this?" Natalia Imperatori-Lee, a theologian at Manhattan College in the Bronx, New York, tweeted in reference to CatholicVote's lawsuit.

"The Catholic Church is very clear in its teachings about justice for immigrants and refugees," McGuire wrote.

Donald Kerwin, executive director for the Center for Migration Studies, a Scalabrinian think tank, told NCR by email that it is "disturbing and shameful that an organization with Catholic in its name would turn on Good Samaritans, doing God's work at the border, as if they somehow deserve to be investigated as criminal conspirators."

Said Kerwin: "Catholic politicians have attempted in the past to criminalize persons aiding desperate migrants in the desert. Elements of the Catholic press have reliably attacked the teaching of the Catholic bishops and the Holy Father on these issues, but still it never ceases to surprise me."

CatholicVote has courted controversy with past actions that include harvesting churchgoers' cell phone data — a practice known as geofencing — to mobilize them in an effort to reelect former President Donald Trump in 2020.

Judicial Watch, a conservative activist group that often files information requests targeting liberal politicians, joined CatholicVote in its new federal lawsuit, which they filed Feb. 4 in the U.S. District Court for the District of Columbia.

"Americans have the right to know how the Biden administration is using tax dollars to conspire with 'charities' and release illegal immigrants into their communities," Judicial Watch President Tom Fitton said in a press release.

In its requests, filed on Sept. 1, 2021, CatholicVote sought all communications between U.S. Customs and Border Patrol and Bishop Daniel Flores of Brownsville, Texas, as well as the Diocese of Brownsville, Catholic Charities of the Rio Grande Valley, the Humanitarian Respite Center in McAllen, Texas, and Pimentel. 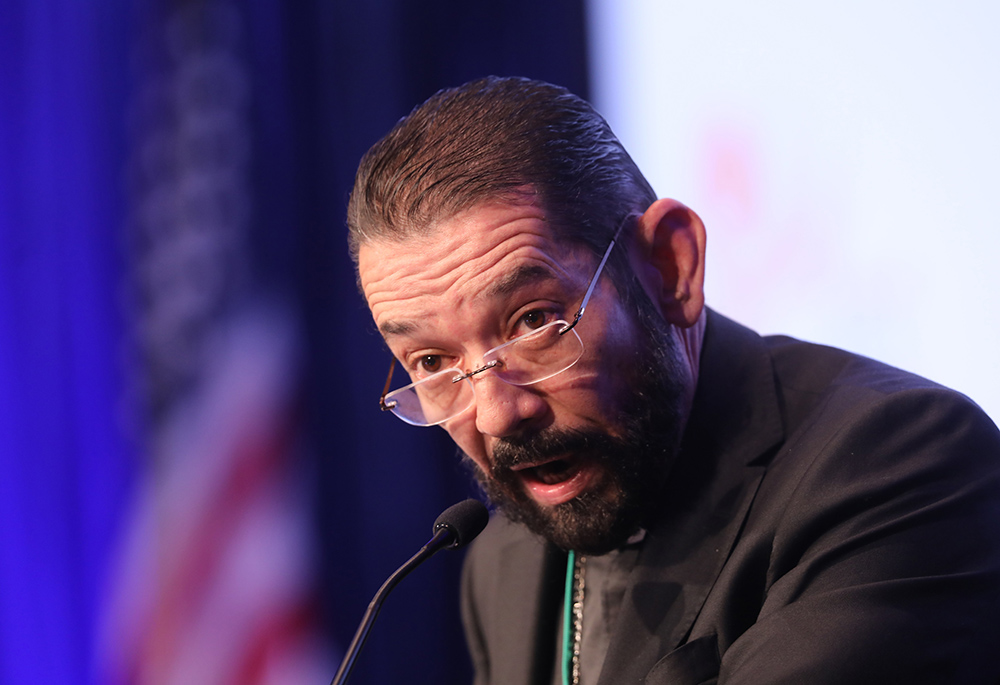 Bishop Daniel Flores of Brownsville, Texas, speaks during a Nov. 17, 2021, session of the fall general assembly of the U.S. Conference of Catholic Bishops in Baltimore. (CNS/Bob Roller)

It is not uncommon for government entities to take several months, or even years, to respond to FOIA requests.

Also on Feb. 4, CatholicVote filed a second lawsuit, against the U.S. Department of Justice seeking communications between the department's Office of the Solicitor General and a host of Catholic bishops, individuals and organizations.

That lawsuit refers to any communications between the government and those parties regarding controversial state-level abortion laws in Texas and Mississippi. Some of the named bishops are Cardinal Wilton Gregory of Washington, Bishop John Stowe of Lexington, Kentucky, and Bishop Robert McElroy of San Diego. The named groups include Catholics for Choice, which supports abortion rights, and Faith in Action.

Catholic Charities of the Rio Grande Valley operates the Humanitarian Respite Center out of Sacred Heart Catholic Church in McAllen, Texas, to provide services such as clothing, food, showers, medical care and temporary shelter for migrants and their families.

"Our border is in chaos. Women and young girls are being trafficked and raped. Dangerous drugs are flowing into our country, while reports suggest border enforcement officials are overwhelmed … and Catholic-affiliated agencies are reportedly working directly with the federal government," Burch said in his mass email.

The email mentioned the above-named Catholic agencies, as well as Flores and Pimentel, who has been widely lauded, even directly from Pope Francis, for her work in assisting migrant families at the border. Burch raised questions about their work on behalf of migrants.

Wrote Burch: "Are they helping house migrants in homes, hotels, or shelters? Are they paying for transportation, flights, buses, or other services — with government money? Is what they are doing legal? And is it the right thing to do?"

The Humanitarian Respite Center, Pimentel said, has partnered with several organizations over the years and "takes great care" to ensure that all donations and funds are used "prudently."

"I take very seriously every single dollar that was earned by someone and entrusted to me," Pimentel said. "I respect the confidence they give me and I use it responsibly to care for the families with basic necessities like water, food and a place to rest their heads."

Flores told NCR in an email that it was "unfortunate" that CatholicVote and Judicial Watch were framing the relationship between Catholic Charities of the Rio Grande Valley and the federal government "in a distorted way."

"I question why Catholic Charities is being singled out when a number of other non-government organizations (NGOs) and city entities have received and are also receiving funding," said Flores, who added that Catholic Charities of the Rio Grande Valley was among several organizations in 2021 that qualified to receive reimbursement for expenses related to providing basic humanitarian care for people who had been approved by U.S. Customs and Border Patrol to enter the United States.

"I commend the work Sister Norma Pimentel, her staff and volunteers are doing to help those in need of care in our community, including immigrants," Flores said. "It is with great care and responsibility that Catholic Charities RGV utilizes all donations and funds given to assist in the humanitarian care of those suffering in the community."

Judicial Watch's press release announcing the lawsuit references a Feb. 3 interview where Pimentel reportedly said that the federal government reimburses Catholic Charities of the Rio Grande Valley to purchase "very few" plane and bus tickets for undocumented migrants to move throughout the United States while their asylum cases are pending in federal immigration courts.

The release further notes an executive order that Texas Gov. Greg Abbott issued on July 28, 2021, restricting ground transportation of undocumented migrants "who pose a risk of carrying COVID-19 into Texas communities." Federal, state and local law enforcement officials are exempt from that order.

The day after Judicial Watch's press release, U.S. Rep. Lance Gooden, a Republican from Texas, gave an interview to Fox News where he accused Catholic Charities and other nongovernmental organizations of "exacerbating the border crisis."

Pimentel said that those on the front lines of her agency's humanitarian outreach to migrants know the work they do helps restore human dignity.

A version of this story appeared in the March 4-17, 2022 print issue under the headline: Conservative group's lawsuit over Catholic border ministry draws criticism.