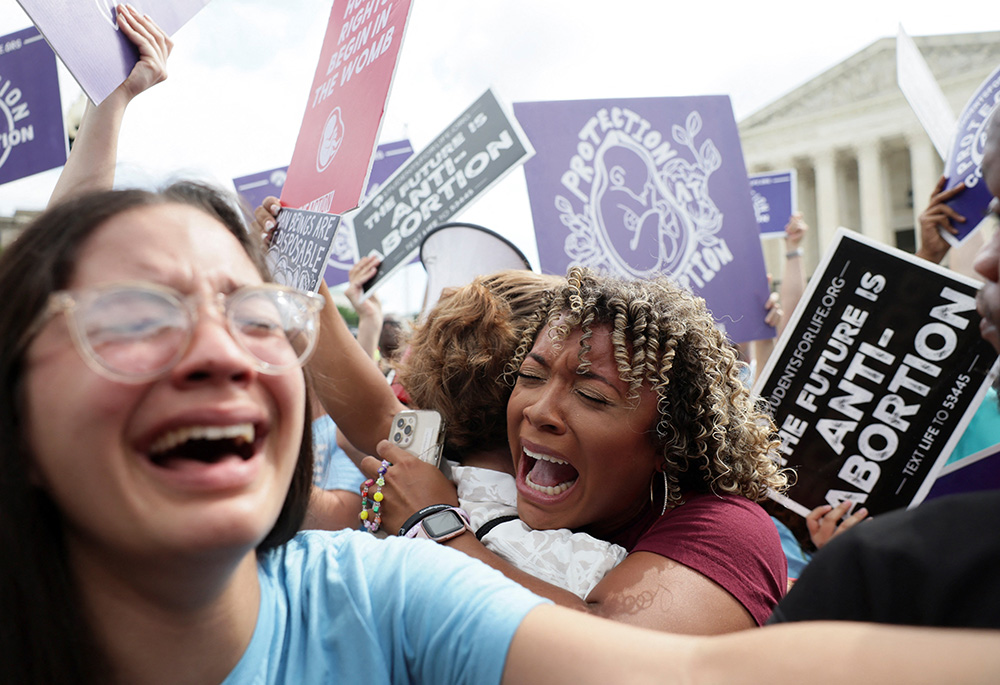 Pro-life demonstrators in Washington celebrate outside the Supreme Court June 24 as the court overruled the landmark Roe v. Wade abortion decision in its ruling in the Dobbs case on a Mississippi law banning most abortions after 15 weeks. (CNS/Reuters/Evelyn Hockstein)

Editor's note: This story has been updated since its original publication with additional reactions to the Supreme Court's decision.

Catholics across the ideological and political spectrum responded with joy, anger and trepidation to the U.S. Supreme Court's June 24 decision that overturned its earlier 1973 decision in Roe v. Wade that had guaranteed a constitutional right to abortion.

In prepared statements issued through their dioceses and state-level Catholic conferences, several U.S. Catholic bishops praised the high court's ruling in Dobbs v. Jackson Women's Health Organization, in which the court's conservative majority said the Constitution does not confer the right to an abortion.

"This is a historic day in the life of our country, one that stirs our thoughts, emotions and prayers," Archbishop José Gomez of Los Angeles, president of the U.S. Conference of Catholic Bishops, and Archbishop William Lori of Baltimore, chairman of the conference's Committee on Pro-Life Activities, said in a written statement.

The prelates said the Dobbs decision was "the fruit of the prayers, sacrifices, and advocacy of countless ordinary Americans from every walk of life," and said that "now is the time to begin the work of building a post-Roe America."

"It is a time for healing wounds and repairing social divisions; it is a time for reasoned reflection and civil dialogue, and for coming together to build a society and economy that supports marriages and families, and where every woman has the support and resources she needs to bring her child into this world in love," they said.

Related: Editorial: In wake of Dobbs decision, it's time for anti-abortion Catholics to become truly pro-life

Also through a prepared statement, the Society of Jesus in the United States said it welcomed the court's ruling, adding that abortion "is a massive injustice in our society, and today's ruling is a critical step toward the legal protection of all unborn children."

Meanwhile, Jamie Manson, the president of Catholics for Choice, an organization that supports abortion rights, and other activists were headed to the Supreme Court to protest what they consider to be an unjust overreach by a politicized court.

"We'll be witnessing with our bodies, with our words and with our presence that this decision is radically unjust," said Manson, who told NCR that the Dobbs ruling doesn't "reflect the beliefs of the majority of Catholics" that she said believe abortion should be kept legal, as indicated in several public opinion polls.

"I don't think the bishops and other anti-choice Catholics have reckoned with the fact of how pervasive abortion is, how ordinary it is, and how much a part of life it is in the church, and how Catholics who have abortions are participating in the life of the church in their midst, and they don't even know it," Manson said.

The Vatican's Pontifical Academy for Life also issued a statement praising the Court's decision, but notably also called for "developing political choices that promote conditions of existence in favor of life without falling into a priori ideological positions."

By striking down Roe and the subsequent 1992 decision in Planned Parenthood v. Casey that affirmed the constitutional right to an abortion, the Supreme Court effectively returns the issue to state legislatures. Abortion is expected to be illegal in about half of the 50 states. Within hours of the court's ruling in Dobbs, Missouri Gov. Mike Parson signed a proclamation declaring most abortion procedures to be illegal in that state.

Abortion will remain legal in Democratic-controlled states, several of which passed laws in recent years to "codify" or strengthen abortion access given the appointment of three conservative justices to the high court by then-President Donald Trump. 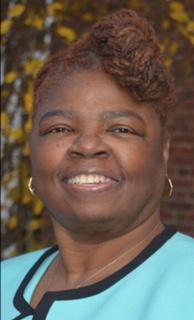 Valerie Lewis-Mosley, a pastoral theologian and adjunct professor of theology at both Caldwell University in Caldwell, New Jersey, and Xavier University's Institute for Black Catholic Studies in Louisiana, told NCR she's concerned about a myriad of issues after the June 24 ruling, including high mortality and morbidity rates of pregnant African American women.

"I'm authentically pro-life and believe in the sanctity of life from conception until the last breath on earth," said Lewis-Mosley. "But there's a difference between saying we are pro-life and focusing on what goes into caring for life, saving life and restoring life. I don't believe the pro-life cause has been truly pro-life but instead anti-abortion."

Lewis-Mosley, who was also a nurse for more than four decades, working at New York-Presbyterian/Weill Cornell Medical Center in high-risk obstetrics, said "the degree and severity of what happens to Black and Latino women who are pregnant is distressing and the Catholic Church has not addressed it."

"So with this ruling, I want to know: How will we be authentically pro-life and address these issues?" said Lewis-Mosley.

Referencing the Court's earlier decision on June 23, which struck down a New York state gun control law, Imperatori-Lee said: "On the heels of the court's ruling on guns yesterday, it is difficult to fathom whether 'pro-life' has any meaning at all beyond a continuation of this destructive culture war."

MT Dávila, a theologian at Merrimack College in Massachusetts, said the Court's decision made her reflect on the role of Catholic theological ethics.

"It is more important than ever to pursue ethical priorities and argumentation that centers the experiences of women and other gender minorities in considering the morality of contraception and other dimensions of reproductive health," she said. "We must clearly, compassionately, and legitimately declare that the term 'reproductive justice' implies that there are profound links between justice for persons who can get pregnant and racial, migrant, gender, economic, political, and social justice."

The Catholic social justice advocacy group Network, founded in 1972 by a coalition of Catholic sisters, said in a statement that the court decision "will have deep ramifications in people's lives, many of whom may not even realize it yet."

"Undoing nearly half a century of precedent and jurisprudence will undoubtedly have a disorienting and destabilizing impact on our laws, the provision of maternal health care, and our already fraught civil discourse," the group said.

For those who have "made ending federal protections for abortion the singular focus of their political activity," Network said it is urging they expand their focus "to include the economic realities of women and families. Now is the time to listen to the experience of women, particularly women living in rural, low-income communities and women of color."

Catholic Charities USA said in a statement it "remains committed to walking in solidarity with all those who come to our doors, whether they are girls or women in crisis pregnancies or families facing challenging social, economic or housing circumstances."

Democrats for Life, a political advocacy organization that has sought to help elect anti-abortion Democrats to Congress, said they were grateful for the Court's ruling and hope it will help pro-life Democrats nationally.

Kristen Day, the group's executive director, told NCR she hoped Democrats "can take a more moderate approach and that both parties can come together and do what they can to support women, particularly low-income and minority women."

Dominican Fr. Nicanor Austriaco, a molecular biologist who teaches biology and theology at Providence College in Rhode Island, said that after the Court's June 24 decision he expects to see "a hodgepodge of abortion legislation throughout the land."

Austriaco told NCR that he believes Dobbs will "send a message" to his students and challenge them to think through the ins-and-outs of the abortion debate since he suggested they will no longer be able to rely on Roe's premise that abortion is a constitutional right.

"I think Roe v. Wade was a conversation stopper," he said. "I think that once it returns to the state, arguments are going to have to be made on both sides of this discussion. My students therefore will have to be challenged to consider the reasons for one side or the other, not simply take it for granted the judicial fiat, that is what it is."

Approaching the issue from what he said was a pro-life perspective, Austriaco added: "Whenever we move to an arena where reasons are considered, I'm incredibly hopeful because I believe that the pro-life position is a reasonable one, not necessarily a religious conviction."

Gloria Purvis, a longtime Catholic pro-life activist and podcast host for America Media, said: "We have a lot of work ahead of us. This is just the beginning."

Purvis told NCR she hopes that activists who have pushed for an end to abortion also focus their efforts now on advocating for family-friendly public policies that will support young mothers and women facing crisis pregnancies.

She mentioned paid family leave and stricter enforcement of anti-pregnancy discrimination laws as helpful measures, and suggested that anti-abortion activists can work with those who support abortion rights to lobby for those kind of policies.

"I'm actually looking forward to working with a lot of women who are pro-choice and want full equality for women in our society," Purvis said.

A version of this story appeared in the July 8-21, 2022 print issue under the headline: Building a post-Roe America.