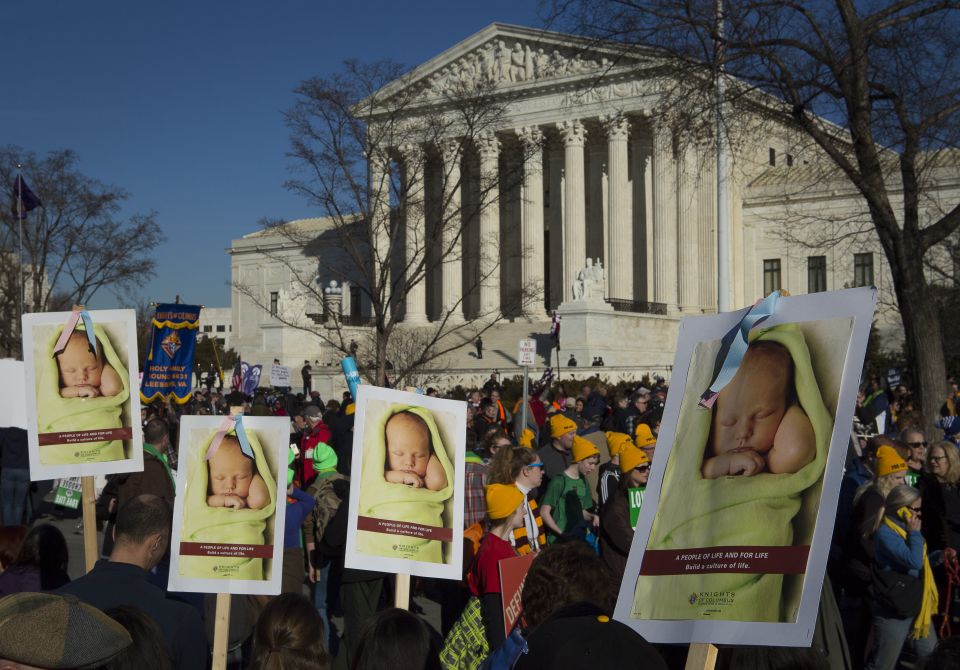 Pro-life advocates gather near the U.S. Supreme Court during the annual March for Life in Washington Jan. 19. The U.S. Supreme Court ruled 5-4 June 26 that a California law which placed requirements on crisis pregnancy centers that oppose abortion violates the First Amendment. (CNS/Tyler Orsburn)

In its decision in National Institute of Family and Life Advocates (NIFLA) v. Becerra, the court found that the law changes the content of the clinic's speech "by compelling petitioners to speak a particular message," and that the law went further than being a mere "regulation of professional conduct that incidentally burdens speech."

The state law in question is the Reproductive FACT Act, which says pregnancy centers must post notices in their facilities about where low-cost abortion services are available and also must disclose if they have medical personnel on staff.

During the oral arguments March 20, some of the justices expressed concerns that the law might be about specifically targeting crisis pregnancy centers instead of providing information about abortion, and the decision mentions that, if the goal of the law were merely providing information about abortion to the public, that goal could be accomplished in more effective ways that do not require speakers to deliver unwanted speech.

Cardinal Timothy Dolan of New York, chair of the U.S. Conference of Catholic Bishops' Committee on Pro-Life Activities, praised the ruling as "an important victory for the free speech rights of pro-life organizations."

"The Supreme Court today has affirmed that the First Amendment protects the right of all organizations to choose for themselves not only what to say, but what not to say," he said in a statement.

"This includes allowing pro-life pregnancy care centers to continue providing life-affirming support to both mother and child without being forced by governments to provide free advertising for the violent act of abortion in direct violation of the center's pro-life convictions," he said.

The USCCB and several other faith-based groups filed a friend-of-the-court brief before the Supreme Court supporting the pro-life pregnancy centers in the case.

Rep. Chris Smith, R-New Jersey, who is co-chair of the Congressional Pro-Life Caucus, said in a statement that "pregnancy centers want no part of a law requiring them to tell a woman where to go to kill her child. Thankfully, today the Supreme Court recognized their First Amendment right to free speech -- and to refrain from speaking."

"Crisis pregnancy centers like NIFLA serve women and children according to their religious mission, and California should respect that," said Mark Rienzi, president of Becket, which is a nonprofit religious liberty law firm. "This ruling proves that when it comes to important issues, the government doesn't get to tell people what to believe, and it also doesn't get to tell people what to say about it."

A version of this story appeared in the July 13-26, 2018 print issue under the headline: Requirements for pregnancy centers violate free speech .