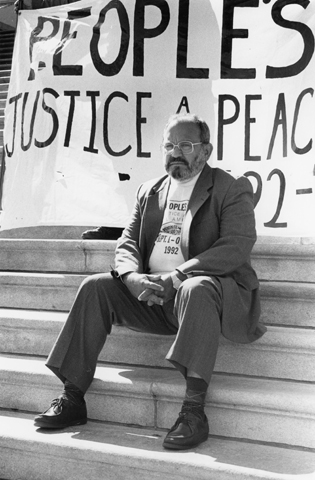 I first met Maryknoll Fr. Miguel D'Escoto in a private conversation arranged by Maryknoll friends during a visit to Nicaragua in 1983. Bolivia, where I was a missionary priest, had just emerged the year before from the brutal nightmare of a two-year military dictatorship where we had lived in the worst excesses of a national security state. We were trying to rebuild the bonds of social peace there and I wanted to learn something of the Nicaraguan experience. D'Escoto had been serving as the foreign minister of Nicaragua since the 1979 victory of the Sandinista Revolution.

D'Escoto was most friendly and helpful as we spoke of the immense problems of social change and conflict in all countries of Latin America. Those were the years of the Cold War and U.S.-backed "Contras" massed on the Honduran border who were an immediate threat to the stability of the new Nicaraguan democracy. We still live with the consequences and unsolved social problems of that fateful alliance, seen most poignantly in the thousands of Honduran children coming now as refugees to our borders.

In 1985, Pope John Paul II visited Nicaragua and enforced church law, ordering D'Escoto and two other priests serving in the Sandinista government, Jesuit Fr. Fernando Cardenal and Trappist Fr. Ernesto Cardenal, to choose between their priesthood and their government positions. They all refused to resign their government posts and continued to serve the Nicaraguan people, not for party reasons but as patriots, because there were few others who had the education and experience to do their jobs.

The restoration of D'Escoto to priestly ministry sends another beacon of light from the Latin American pope, Francis, to help unravel the knotted threads of ignorance and misunderstanding cloaking the hemispheric history of the last 60 years. Was D'Escoto a faithless priest, even a Marxist, because he wanted a free, independent and democratic Nicaragua after decades of the dictator Anastasio Somoza? The Maryknoll community, of which D'Escoto was, and is, a devout member, never thought so. Nor did the majority of members of the 60th General Assembly of the United Nations when they elected D'Escoto as assembly president for 2008-2009.

D'Escoto's accomplishments include the many social projects developed around housing for the poor and community development. These projects led him to connect sustainability of resources to development of peoples. In 2009, he highlighted that concern by coming to Bolivia to honor President Evo Morales as "World Hero of Mother Earth" for his work in bringing ecology and conservation into the new constitution of Bolivia.

In April 2010, D'Escoto returned to Bolivia for the "World People's Conference on Climate Change and the Rights of Mother Earth." ("Pacha Mama" is the name for "Mother Earth," with deep religious meaning for the native peoples of Bolivia, the Andean nations and, under other names, all the native peoples of the Western Hemisphere.) Thousands of people from all over the world attended. Many proposals and resolutions for preserving the earth were approved by the various assemblies and later shared with world governments and the United Nations. As usual, this event in a small country like Bolivia was almost totally ignored by the United States media and government.

D'Escoto was again respected as one of the most revered and relevant presenters at the conference as he spoke to the needs and hopes of the world's poor and marginalized peoples.

Speaking with the media and a wider public, he also reiterated his public plea for the reform of the United Nations. He said his experience was that the United Nations was dominated by the Security Council of the powerful nations who could veto any decision of the total nation-members. This means that questions of world peace and war, climate change, sustainable development of peoples and their food supply, finance and trade agreements -- any decisions of the majority about the common global future of the human family -- can be blocked by even one member of the Security Council. In effect, he said, the historical period of colonialism continues in our postmodern, global world.

This new gesture of the Vatican concerning D'Escoto brings hope that some serious questions of the past can be restudied with more calm and less conflictive rhetoric. Was the theology of liberation in Latin America a cave-in by church people to the Marxists? Or was it a faithful interpretation of Catholic social teaching that still seeks relevant social changes? Were the many Catholic martyrs like Archbishop Oscar Romero, the Maryknoll sisters and the Jesuits of the Central American University in El Salvador social agitators? Or were they unheeded prophets whose lives now call us to continue their tasks?

Pope Francis has lived these same experiences and knows the importance of this historical moment. His apostolic exhortation on "The Joy of the Gospel" gives a game plan for the current mission of the church. A church not worldly but in the real world of seeking suffering human persons to accompany and serve them.

D'Escoto, like many others, has suffered much for his faithfulness. He is old and in poor health but continues his mission work in the world. This gesture by Francis and the Vatican signals a promising future for learning from some of our past mistakes. It gives great hope for more changes to come.

[Fr. Michael J. Gilgannon is a priest of the Kansas City-St. Joseph, Mo., diocese. He was a missionary in Bolivia for more than 35 years.]

A version of this story appeared in the Aug 15-28, 2014 print issue under the headline: D'Escoto's restoration gives hope for promising future.