Donnelly College provides a leg up for those on the margins 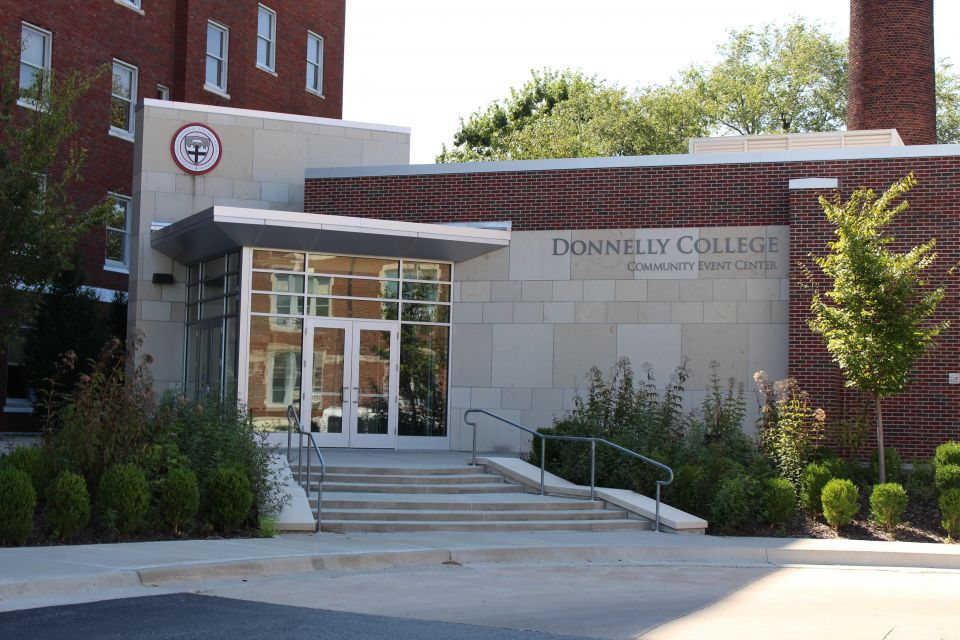 Kansas City, Kan. — No doubt there are classrooms and think tanks on leafy campuses across this nation where the plight of the poor and the situation of immigrants are worked over and examined from every angle.

Donnelly College here would be the place where theory meets reality, a kind of clinical practicum on how very difficult it is to raise the resources needed to usher the poorest of the poor to a place in the American mainstream.

The mostly two-year college (it currently offers three bachelor's degree programs) was founded in 1949 by Bishop George Donnelly of Kansas City, Kan., and Sr. Jerome Keeler of the Benedictine Sisters of Atchison, Kan. The intent then was to provide a leg up for those on the margins. The sisters were later replaced by a mostly lay faculty, but the Kansas City archdiocese remains a staunch supporter, and the core of the mission is the same today.

The statistics are daunting and Msgr. Stuart Swetland, Donnelly's president since 2014, rattles them off with little prompting:

• Somewhere between 80 and 90 percent of students here are the first in their families to go to college.

• An overwhelming majority come from families making less than $18,000 a year.

• Almost all the students who are citizens are eligible for federal Pell Grants. In real numbers, that's about 65 percent of all students attending. Many of the others would also be eligible from a financial perspective but may not be documented. The college doesn't ask questions.

• Only 29 percent of the budget is based on tuition money, said Swetland. "Seventy-one percent of my budget I have to beg, borrow and steal."

• On that last point, he said, all colleges do comparisons. For the colleges Donnelly compares with, the average is 58 percent of the budget comes from tuition, exactly double what he can expect.

In March, the college was midway to a $25 million fundraising goal to either refurbish the existing building or build somewhere else in the city. Archbishop Joseph Naumann, in a vote of confidence in the institution's future, had started things off with a $4 million donation from the Kansas City archdiocese.

From 1949 through the mid-to-late 1960s, "the vast majority coming here were kids from the Irish parish, the Croatian parish, the German parish, whose parents never went to college," Swetland said. Many of them went on to four-year schools and successful careers.

The white flight of the 1960s "really changed all of that," he said. The student body became almost entirely African-American. "And then came the new wave of Latino students that started with the new wave of immigrants." Currently the school is officially designated as a Latino-serving institution, which makes it eligible for grants and federal funds.

As if the current population wasn't challenge enough, Donnelly has recent expanded its prison ministry by offering the associate's degree to inmates at Lansing Correctional Facility, a state prison for men, and has begun offering classes at the women's prison in Topeka.

There was, on the day this writer visited, a coincidental and momentary intrusion of the urban reality that for many in KCK, as the city is often referred to, is a numbingly regular part of life. The crime rate, including violent crime and murder, are considerably higher than the rates in the rest of the state and nationally. About 16 minutes into the interview in Swetland's office, there was the distinct pop of firearms outside.

"Ah, I love my neighborhood," he joked. "It's probably just firecrackers."

A few minutes later, there was an insistent knock on his office door. His face changed. "Maybe those were shots, not firecrackers," he said, rushing out of his office.

He came back and confirmed that the four loud pops were gunshots. He rushed off again, and the school went into lockdown for 15 minutes.

No one had been hurt in a fight over something in an incident involving a young man trying to get into the back seat of a car as it was driving away from the parking lot just outside of Swetland's office.

The college, which relocated in 1982 to a converted hospital, is in one of KCK's safer neighborhoods. But there is a much shorter distance here than one would experience on most campuses between the life of the academy and life on the streets.

Many of today's students at Donnelly face enormous odds in just surviving week to week, never mind getting to class. "The immediate gets in the way of the important" is a line that applies to many of the students.

"Setbacks can include child care, a broken transmission," said Swetland. "And don't get me started on the payday loan people."

Last year, in one of the programs he was teaching, he began to notice students dropping out.

"I said I want to start tracking every single person who drops out. I need to know the story. So one young woman who had been gone for a long time — I said, 'What's going on?' [and] she'd been kidnapped. She'd been unfortunately abused but she was in recovery."

Another student was on his way to graduation when he dropped out. "What happened? His mother got run over at night in the middle of the street and he was left to deal with it and the rest of the family. … There was no one else. There were four kids and he was the oldest. But these are the kinds of things the students are up against." So a lot of counseling is built into the educational structure.

So what is the Naval Academy grad who did a stint at Oxford as a Rhodes Scholar (NCR, Oct. 7-20) doing in this rather austere setting? As he puts it, when the position opened up — "Somebody called me and said, 'Would you consider applying?' " — it fit right into a kind of arc of change that he had been undergoing at that time.

Swetland has a microphone behind his desk for doing his daily Relevant Radio program, "Go Ask Your Father," he appeared regularly on the conservative Catholic EWTN network, and he writes regularly for the National Catholic Register. He's a familiar figure in some of the more conservative corners of the Catholic community. But he's not confined by the orthodoxies that are usually implied by such labels.

"You don't understand Stuart unless you understand the depth of his Catholicism," said longtime friend and conservative scholar Robert George of Princeton University, who became friends with Swetland during their time studying at Oxford. "There's a consistency there. He's not always with the left or right, but with the church."

Wrote Jeanette DeMelo, editor in chief of the National Catholic Register, in answer to an email question: "Msgr. Swetland has written commentaries for the Register for many years and has been an insightful source weighing in on pressing moral issues, especially related to war, peace, and international relations. Our team of editors appreciate how he has placed his profound intellect at the service of the Church, especially in his capacity to clearly articulate Church teaching on matters relative to our changing cultural and religious landscape."

As a self-described "JPII priest," he was thoroughly engaged as a culture warrior on behalf of the church. "The idea was if we stood strong, if we stood for the natural law and the truth that flowed from the natural law in marriage and other things, we had something to offer America that America desperately needed," Swetland said. "Well, if that argument needed to be engaged the way it was engaged, we're surely past it now. We failed with it. We have to admit that we failed to convince the culture."

Both right and left "were trying to speak to a kind of cultural decay. I think somewhat in isolation or even over against each other, when in fact both were addressing something that was two sides of a similar coin, which was the decay of fundamental institutions in the United States, the most important being the family."

At the outset of his ministry, he said, "I was pretty stridently anti-abortion." It topped the list when he spoke about Catholic obligations to vote. 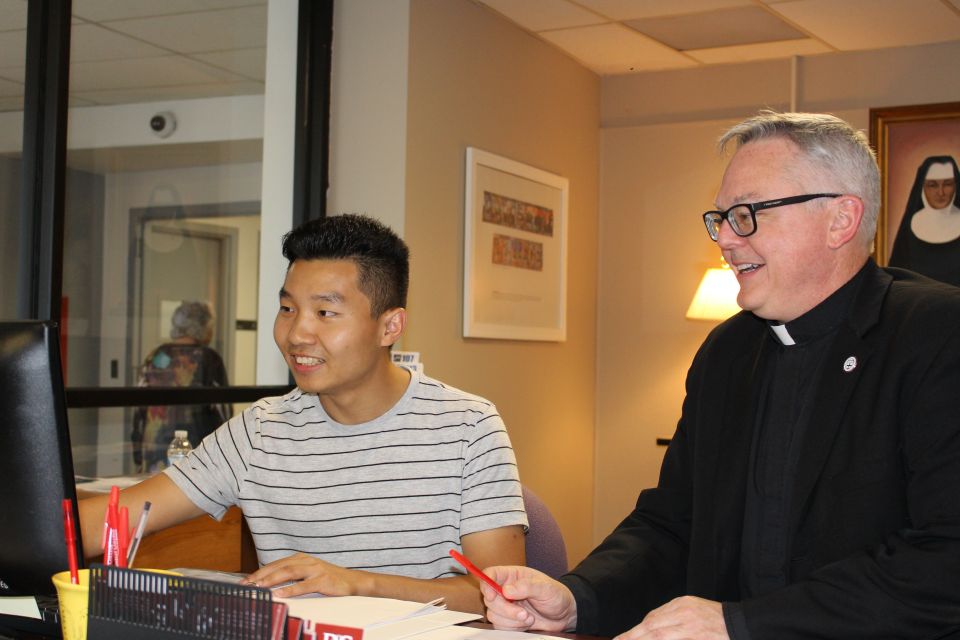 While he still holds that "abortion is the single greatest injustice going on in the United States, it's not the only one by far."

His introduction to an array of other justice issues also began early in his priesthood when he was assigned to poor parishes in Peoria, Ill. He was first placed in the second-poorest parish in the diocese.

"I used to joke with my finance counselor that whatever parish I had next, it would have more money. But there was one poorer — and that's what I got next."

The experience was integral to the priest he was becoming, he said, because "you learn more from the poor than you can ever teach. I was a privileged kid who went to a free academy and then got a fancy scholarship. I never paid a cent for anything and had all the privileges that life could afford," he said.

"And then I got to see what people struggling day in and day out" went through, he said. They were blue-collar Catholics who "didn't have anything as far as the world was concerned, but they had a sense of esprit de corps and community and they loved each other. It was the Gospel writ large."

His second parish was 95 percent African-American, a community with which he previously had had no experience. At the parish, he was the one who was different and he got to see another community "struggling to survive" but with a great sense of community.

He did a doctorate in Catholic social teaching, "a rich, rich vein of mainly untapped truths for the United States. I think it contained exactly what the United States needed to hear and at the time, the late '90s … I started to already to have some serious doubts about the whole cultural war thing."

When Pope Francis elected, "it was so clear to me he had a way of getting past this cultural war thing — start with the poor, this is something we can all agree on. And I think all Catholics in America, whether you're conservative, liberal, progressive, whatever you call yourself, every one of us should recognize that where we need to start is with the marginalized and the poor."

Just as he was becoming convinced of Francis' approach, the call came about Donnelly. He knew little about the place, but when he looked it up, he said to himself: "Wow, they're doing what Pope Francis says we should do."

And then he laughed. "Now I don't think Pope Francis is a very practical person. This is a very impractical thing we're doing here. But we are trying to help."