Dorothy Day's 'filthy, rotten system' likely wasn't hers at all 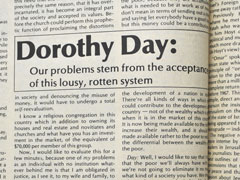 By the time I arrived at the Catholic Worker in New York in 1975, a poster featuring Bob Fitch’s photo of Dorothy Day was already ubiquitous. It could be found, and can still be found today, tacked on the walls of soup kitchens, hospitality houses and farming communes, or mounted and framed in rectories and academics’ studies.

Dorothy, already in her 70s, is sitting serenely, almost regally, on a campstool, framed by guns and clubs hanging on the belts of two cops ready to take her into custody. The text under the photo, “Our problems stem from our acceptance of this filthy, rotten system,” attributed to Dorothy Day, is widely quoted by scholars, journalists and Catholic Workers, even more since her death in 1980. It is rare to find a reference to Dorothy and the movement she cofounded that does not include it, and some offer it as a distillation of her prodigious body of writing into a few pithy words.

This is Dorothy Day’s most famous quote. The problem is that she probably never said it.

I was unaware of any controversy until I read a letter in the summer 2008 issue of The RoundTable, a journal published by the St. Louis Catholic Worker community. Bill Barrett, an old friend and my contemporary at the New York Worker, commented on the fact that the “filthy, rotten system” line was mentioned four times in a previous issue.

“Dorothy hated to hear that quoted back to her,” he wrote, and insisted that she would not even allow the poster in question in the house.

Her ill ease with this quote and the poster was news to me, and so I made an informal poll of others who knew and worked with her. Some shared Bill’s memory and some told me that these words were so uncharacteristically uncouth that they doubted that she could have uttered them. Other friends with similar history and intimacy with Dorothy had never heard of any issues around the poster. Some contended that its condemnation of the “filthy, rotten system” was so typically characteristic of Dorothy’s speech and thought that they did not question its authenticity.

My efforts to find the origins of this quote were inconclusive. The archivist for the Catholic Worker papers at Marquette University, Phil Runkel, could find no reference to the quote earlier than the poster itself, which was published by WIN magazine in 1973.

One of Dorothy’s biographers, Jim Forest, did a search of the word rotten and found this in a column by Dorothy from 1956: “We need to change the system. We need to overthrow, not the government, as the authorities are always accusing the Communists of conspiring to teach to do, but this rotten, decadent, putrid industrial capitalist system which breeds such suffering in the whited sepulcher of New York.”

Tom Cornell, former managing editor of The Catholic Worker, offered a promising lead: “My clear recollection is that [Day] said these words in an interview in the offices of the National Catholic Reporter in Kansas City, that she did not expect to be quoted, and that when she saw the words in print she was offended to be quoted using language which she considered vulgar and crude.”

By this time, though, I was tired of the whole matter and gave it up.

The ringing denunciation of the filthy, rotten system as the source of our problems could not be quieted, though, whatever its origins. In the intervening years, as if doubts cast on its authenticity breathed new life into it, scholars and Workers alike used the quote more than ever, attributing Dorothy’s authority to it without question. In the last few months, moreover, the analysis that “our problems stem from our acceptance of this filthy, rotten system” has found resonance in the Occupy Wall Street movement.

Encouraged by images of hand-lettered placards attributing this scathing critique of the system to Dorothy Day popping up at Occupy encampments, I decided to renew my search of its genesis and forwarded Tom’s recollection to a friend on the staff of NCR, Joshua McElwee.

Joshua found the interview Tom remembered in NCR’s Feb. 18, 1970, issue, in which the editors interviewed Dorothy and writer Gary MacEoin and presented their conversation as a Lenten reflection under the headline “Money and the middle-class Christian.”

The editors put a large box in the body of this article with a subhead proclaiming in large, bold type: “Dorothy Day: Our problems stem from the acceptance of this lousy, rotten system.”

Here, I am convinced, is the “smoking gun”!

Except for the substitution of the word filthy for lousy, this saying struck a chord and -- for good or for bad, whether she liked it or not -- these words became Dorothy’s in the public mind. There is a problem, though; in that these words attributed to her are a paraphrase at best, and a departure from what she said in the article. However stirring or true to Dorothy this adage might or might not be, it is misleading and it distorts her expressed intention.

In the conversation, she mourned the condition of the Catholic church. “I feel that over and over again in history the church has become so corrupt it just cries out to heaven for vengeance,” she said.

“The crisis is something terrific,” Dorothy went on, citing the reduced numbers of vocations. But closed church buildings and abandoned ministries are a “purification” of sorts, she insisted, as if the Lord is taking into hand “what we don’t do ... ourselves.”

“You think it has a great deal to do with property?” NCR asked.

“I think it’s a result of the corruption in the institutional church,” she answered, “through money and through their acceptance of this lousy, rotten system.”

Clearly, in this interview Dorothy expressed her conviction that it is the church’s “acceptance of this lousy, rotten system,” its accumulation of wealth, its blessing of usury and industrial capitalism and the wars that support it, from which the church’s problems stem. She was speaking specifically here of the church, not of society at large. It can be said, and she said as much in her 1956 column, that the same goes for the latter, but this was not what she was trying to say in Kansas City, Mo., in 1970.

Perhaps it was a lack of clarity created by an editor’s shortcut that was at the heart of Dorothy’s reported irritation over NCR and the poster. If in her own column in the paper for which she was editor and publisher, Dorothy did not demure from excoriating “this rotten, decadent, putrid industrial capitalist system,” it is unlikely that she would take offense at having the editors of NCR or WIN magazine attribute similarly abrasive words to her.

Dorothy was not uncritical of the 1970s popular culture, and it may have simply mortified her to be immortalized as a pop icon on a poster. (“Don’t call me a rock star, I won’t be dismissed so easily,” to paraphrase another legendary Dorothy quote.)

“Our problems stem from our acceptance of this filthy, rotten system” still makes a perfectly good poster and it is gratifying to see its resurgence among the young. I suggest, though, that “We need to overthrow this rotten, decadent, putrid industrial capitalist system” works better and can be more easily defended as authentically Dorothy’s.

What is unfortunate is that Dorothy’s famous words have been distorted over the years by the loss of this crucial detail -- that they were directed at the church she loved with all her heart, even as it was so often a scandal to her.

[Brian Terrell lives at the Strangers & Guests Catholic Worker farm in Maloy, Iowa, and is a co-coordinator of Voices for Creative Nonviolence.]

Editorial: It's time to end the perpetual war

COVID-19 pandemic has revealed a dangerous providentialism among Catholics