Eamonn Casey, the bishop whose scandal changed the church in Ireland, dies aged 89 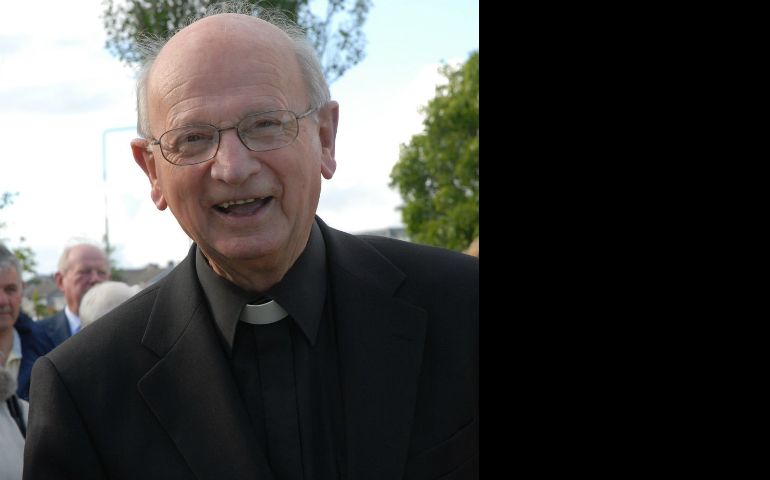 Retired Irish Bishop Eamonn Casey of Galway, pictured in an undated photo, died March 13 at age 89. Bishop Casey was known for his social justice work in Ireland, Britain and the Third World, but in 1992 he fled Ireland after it was revealed he had fathered a child with an American woman. Bishop Casey has spent recent years in a nursing home in County Clare. (CNS photo/The Irish Catholic)

Galway, Ireland — Eamonn Casey, the former bishop of Galway and Kerry who was at the center of a major scandal in Ireland when it emerged in 1992 that he had fathered a child and used church funds to pay maintenance, has died at the age of 89 in a nursing home in Newmarket-on-Fergus in Co Clare after a long illness.

In a statement hours after Casey's death, Peter - the son who was at the centre of the scandal - and other relatives, including the bishop's brother Father Micheal and his sister Ita Furlong, paid tribute to the colorful clergyman.

"We wish to acknowledge the priestly work of Bishop Eamon, especially in the pursuit of social justice for the marginalized, as evidenced by his work with Shelter in London in the 1950s and 1960s, and later with his involvement in the setting up and development of Trocaire," they said.

"Notwithstanding the demands on his time, Bishop Eamon was a great source of love and support, making himself available to celebrate and to empathise with us in all our important family occasions."

Ordained to the priesthood in 1951, Casey was appointed Bishop of Kerry in 1969 before taking on the larger and more high-profile diocese of Galway and Kilmacduagh in 1976. The illegitimate son at the center of the scandal was the product of a relationship with an American woman, Annie Murphy - a friend of a friend who came to stay at the bishop's residence to convalesce after her divorce. Peter, their son, was born in 1974 but Casey refused to acknowledge him and Murphy returned to the United States with their son.

At the time Casey, who was considered by Ireland’s standards to be a respected, progressive and modern-looking priest, is said to have wanted his son Peter put up for adoption.

The affair remained a secret for 18 years until a story ran on the front page of The Irish Times on 7 May 1992, on his resignation as Bishop of Galway and of payments of $115,000 to a woman in Connecticut and a lawyer in New York, and other regular payments since Peter’s birth.

Within days, Annie Murphy had told her story to the Irish media.

The scandal proved a seminal moment for the Catholic Church in Ireland as the revelation was so far outside the experience of the country: prior to the Casey affair priestly scandal was unheard of, and the church was all-powerful in an Ireland with no divorce and no same-sex marriage.

He fled Ireland for the United States, before returning to Europe and to Rome to hand in his resignation. He moved to Mexico to learn Spanish before being moved to the American Missionary Society of St James the Apostle, in Ecuador.

Outside of the Catholic Church he was a tireless campaigner for those in difficulty or for injustices. He was involved in helping the homeless Irish immigrants in London in the 1960s that preempted the foundation of Shelter charity organization which is celebrating its 50th anniversary this year.

Casey was also appointed Chairman of Trócaire following the organization’s establishment in 1973. Trócaire was heavily involved in the fight for human rights in El Salvador in the 1970s, and Bishop Casey played a leading role in highlighting the killing of civilians, human rights activists and church leaders in the country. Trócaire was supporting the El Salvador Human Rights Commission, which had been set up by Archbishop Oscar Romero, and other human rights organizations in response to the unlawful killing of 8,000 people.

Éamonn Meehan, executive director of Trócaire, said that Bishop Casey would be remembered with gratitude in communities across the developing world: “Bishop Casey spoke out courageously in defense of persecuted communities overseas and was willing to place himself in danger in order to do so. His campaigning, both at home and overseas, raised awareness of grave injustices and helped to bring about positive change.

“For two decades Casey was the driving force behind Trócaire. Bishop Casey and Brian McKeown, the first Director, formed a dynamic partnership. Together, they stood courageously with the world’s poor and championed their cause when others would not do so.”

Irish President Michael D Higgins also paid tribute to Casey, noting in particular how many will remember his work on housing new Irish emigrants in Britain prior to his appointment as Bishop of Kerry. Higgins said in a statement: "Other aspects of his life were the source of pain to others, for which Bishop Casey has apologized and expressed his deep regret, and he himself had the experience of pain visited on him in later life.”

Editor’s note: This story has been reprinted with permission from The Tablet, a London-based weekly Catholic magazine.

On Pentecost, Irish bishops urge a 'no' vote on abortion referendum