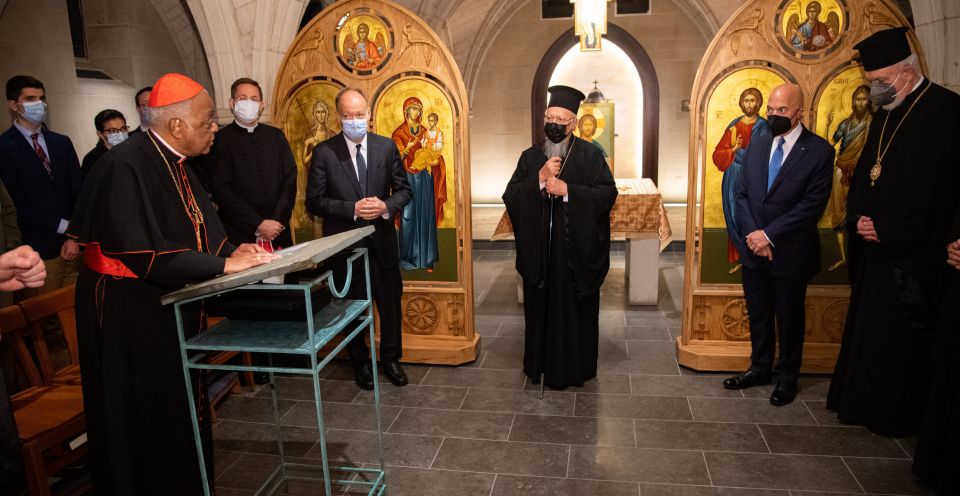 As a dramatic backdrop to his visit, a new icon was on display at the chapel showing apostles and brothers St. Andrew and St. Peter embracing each other — reflecting the fraternal ties between the Orthodox and Catholic churches and the friendship and shared work of the patriarch and Pope Francis.

Greeting the patriarch at the university's Copley Crypt Chapel, Cardinal Gregory said: "Your presence here today among us reaffirms our mutual commitment to dialogue and to the work of Christian unity."

Washington's archbishop said he joined Pope Francis in congratulating Patriarch Bartholomew on the 30th anniversary of his election and he called his visit "a blessing to Georgetown University, the Roman Catholic Archdiocese of Washington and to the nation's capital."

Joined by about two dozen Georgetown students, along with Georgetown's president, John DeGioia, and Orthodox clerics including Archbishop Elpidophoros of America, the patriarch thanked the university for providing a worship space for the Orthodox community there.

He also noted that he had recently met with Pope Francis at the Vatican along with other religious leaders at a climate summit. He attended Pope Francis' inaugural Mass in 2013, becoming the first ecumenical patriarch to do so, and over the years they have met about 10 times.

"I was with him only a few days ago. We have a real brotherly friendship," he said, later adding: "I'm very happy to collaborate with such a personality who belongs not only to the Roman Catholic Church but to all Christianity and humankind."

At the chapel, Michael Psaros, whose family donated the chapel's new icon, said it was inspired by "the great encounter" between Patriarch Bartholomew and Pope Francis at the Church of the Holy Sepulcher in Jerusalem in 2014.

"I was there," Psaros said. "They embraced. His All-Holiness said, 'My brother Peter.' Pope Francis responded, 'My brother Andrew.'"

Psaros called the icon "the ultimate ecumenical act by the oldest and most prestigious Catholic university in the United States to the Orthodox Church" and said it represented an "act of goodwill from the Western Church to the Eastern Church."

Patriarch Bartholomew was elected in October 1991 as the 270th archbishop of Constantinople, the 2,000-year-old-church founded by St. Andrew. Pope Francis is the 265th successor to St. Peter as pope and as the bishop of Rome.

The patriarch said an icon depicting that embrace of the apostles was presented to St. Paul VI and is now in the headquarters of the Pontifical Council for Promoting Christian Unity in Rome.

During the visit to the chapel, Georgetown's president presented the patriarch with a plate depicting the icon.

After he entered the chapel, the patriarch signed the Gospel book that is used for Orthodox worship there, and as the gathering was about to end, students lined up to receive a personal blessing from him.

As he was departing, Patriarch Bartholomew, who gave Cardinal Gregory a pectoral cross as a gift, could be heard telling the cardinal that he hoped to see him "in Constantinople, whenever you like!"

Reflecting on their meeting, the cardinal noted that Pope Francis and other recent popes have been "very dedicated and committed to dialogue between the Orthodox and Catholic faiths."

Father Charles Cortinovis, the cardinal's priest secretary and executive director of the Office of Ecumenical and Interreligious Affairs for the Archdiocese of Washington, said he hoped the gathering would lead to "deepening Orthodox and Catholic collaboration locally, nationally and internationally."

Georgetown student Antonia Sames said that as someone who has grown up and remains an active member of the Orthodox Church, it was a "blessing to welcome His All-Holiness to our academic home."

"As our spiritual father, Ecumenical Patriarch Bartholomew inspires us to strengthen our centuries-old faith amid the challenges of the modern day," she told the Catholic Standard, Washington's archdiocesan newspaper.

Russian Orthodox Father David Pratt, the director of Orthodox Christian chaplaincy at Georgetown, said it was a special blessing to have the patriarch visit their worship space.

At a dinner afterward at the university, DeGioia praised the patriarch for his leadership in ecumenical and interreligious dialogue and for being "known around the world as the green patriarch for his deep commitment to the environment."

Psaros, the donor of the chapel's new icon, said he and his family are establishing an endowed Orthodox chaplaincy at Georgetown University named in Patriarch Bartholomew's honor, so Orthodox priests can continue to serve students.

The patriarch, who received an honorary degree at Georgetown in 1997 and spoke there in 2009, praised the university at the dinner for confronting its connection to slavery.

In 1838, 272 enslaved men, women and children were sold by the Maryland Province of the Society of Jesus to ensure the financial survival of Georgetown College.

In 2015, DeGioia formed a Working Group on Slavery, Memory and Reconciliation at Georgetown University, which led to a formal apology from the Jesuits and the creation of the Descendants Truth and Reconciliation Foundation, to support educational opportunities and scholarships for descendants of the enslaved.

"From afar, we have observed with keen interest how you have addressed issues of injustice in your own past, particularly as they related to the sad story of American slavery," the patriarch said. "We have admired how you have been, not only willing to confront this painful legacy, but you have addressed it with redress in the present moment.

"This shows great courage and spiritual capacity, something that your students see and in which they find inspiration."

The Orthodox leader said this effort is not "rewriting the past. It is righting the past. As an example, all of Christianity — Catholic, Orthodox and Protestants — have had to confront issues of antisemitism and past sins against our Jewish brothers and sisters. We have found a way forward out of the morass of the past by honesty and truth-telling. You have done this with great determination here at Georgetown."

The patriarch said in a similar way, people of faith must honestly address environmental justice and responsibility.

"Our ecological advocacy and witness is not an ephemeral exercise. The entire life of the church is a calling to ecological awareness. It is mandated by the Gospel, which commands us to be 'faithful and wise stewards' of all with which God has entrusted us," he said.

As part of his 12-day visit to the United States, the patriarch will visit the University of Notre Dame Oct. 28 and receive an honorary degree there.

On Nov. 1, the American Jewish Committee will present him with its highest award for interreligious relations and advancing Orthodox-Jewish relations. The following day he is scheduled to preside at the "thyranoixia," or "opening of doors," ceremony at St. Nicholas Greek Orthodox Church and National Shrine at New York's ground zero.

The church and shrine have been under construction for several years and the complex is due to be completed next year.

Book takes on the entanglements of oil

Ending the winter of my discontent