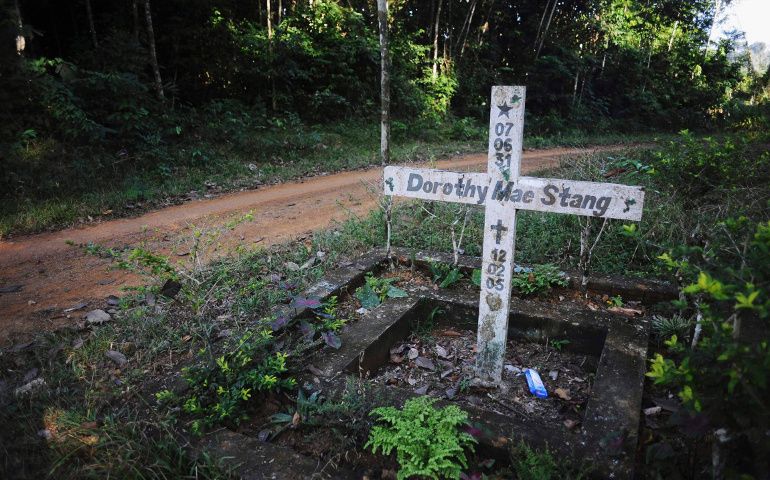 A cross stands on the spot where U.S. Sr. Dorothy Stang, a member of the Sisters of Notre Dame de Namur, was murdered Feb. 12, 2005, on an isolated road near the Brazilian town of Anapu. (CNS photo/Lunae Parracho, Reuters)

There’s scarcely an American Catholic over 45 who didn’t know Sr. Dorothy Stang. That is, they’ve known the archetypal cheerful, pancake-making, ice cream-eating, can-do, go-getting U.S. nun with the ready smile and willingness to help, who could stand as firm as the Rock of Gibraltar when justice for the poor was threatened, and organize faster than governments can move.

It takes a strong faith and a strong prayer life to do it in the United States. It requires a rarer form of Christian courage to do it in a far place.

They said at the burial of Sister of Notre Dame de Namur Dorothy Stang in Anapu, Brazil, that she was not buried, she was “planted” in Brazil’s soil. Brazil’s ambassador to Washington said at a memorial service, her seeds already have shoots. He was referring to Brazil’s commitment to speed through the pending legislation for two enormous tracts of land for sustainable development sites for poor farmers.

And yet, when Dorothy Stang’s blood seeped into the earth from her gunshot wounds, it did more than plant her deeds and memory in Brazil. It bonded her to more than a century of women religious from the United States who left their homes and learned new languages in order to understand the cultures of the larger family they had come to serve in the four corners of the world.

Some died in wars and uprisings. Some died at peace at a great age, others wasted from disease too rapid to cure or too far from the medicine that might have saved them. All these churchwomen died as they had lived and served, thousands of miles away from home. Most would be satisfied that their final remains would be in those places they’d been privileged to serve, places were these women knew that the blessing was something they’d received being there.

They, too, were planted. Their seedlings are strong bulwarks of faith committed to change and justice. Certainly, the Dorothy Stangs from America are fewer now. Where once there were many hundreds, there are now but a few score, a few dozen.

They were, they are, along with the priests and brothers and lay volunteers, fine representatives of the best the U.S. Catholic church has to offer the world. Stang understood as life was blown from her by violence, as she said:

As the Amazon loses resilience, church and popular movements strive to intervene