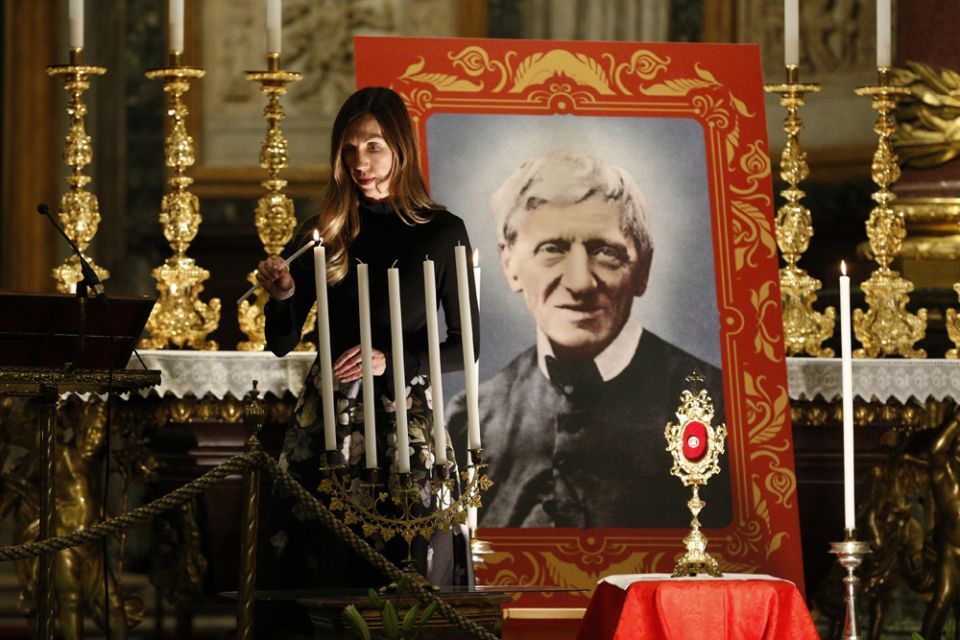 Vatican City — Among the tens of thousands thronging St. Peter's Square for the Oct. 13 canonization of Cardinal John Henry Newman and four other saints, one elderly American had a unique personal perspective to bring to bear.

In August 2001, Jack Sullivan, a law graduate from Braintree, Massachusetts, was inexplicably healed from an agonizing spinal disorder after praying to the then venerable Newman. Nine years later, his cure recognized as a miracle, he stood as a Catholic deacon alongside Pope Benedict XVI as Newman was beatified at a Mass in Birmingham, England.

On Sunday, now 81, Sullivan saw the man he had tirelessly prayed to finally proclaimed a saint.

"I'm ecstatic. It was my fondest wish to celebrate his canonization before I died," Sullivan told NCR. "For some reason still unknown to me, I was blessed by this gentle cardinal. I'm grateful for it, and he knows this. It's an indication our relationship is still very much continuing today."

In his canonization homily, Pope Francis urged Catholics to emulate the new saints — all supported by enthusiastic national followings — by turning their own lives into an "act of praise," and never being "paralyzed" by fears of being shunned and excluded by society.

He distinguished between Newman and the Italian Josephine Vannini (1859-1911), India's Mariam Thresia Chiramel Mankidiyan (1876-1926), and the Brazilian Dulce Lopes Pontes (1914-1992), who had all founded religious orders while working among the poor in "a journey of love at the existential peripheries of the world," and Switzerland's Marguerite Bays (1815-1879), a lay mystic and stigmatic who had revealed "the power of simple prayer, enduring patience and silent self-giving."

But the quote he chose was from one of Newman's Oxford sermons, about the unseen "deep, silent, hidden peace" which true Christians aspire to, accompanied by a "cheerful, easy, kind, gentle, courteous, candid, unassuming" style with "no pretense." 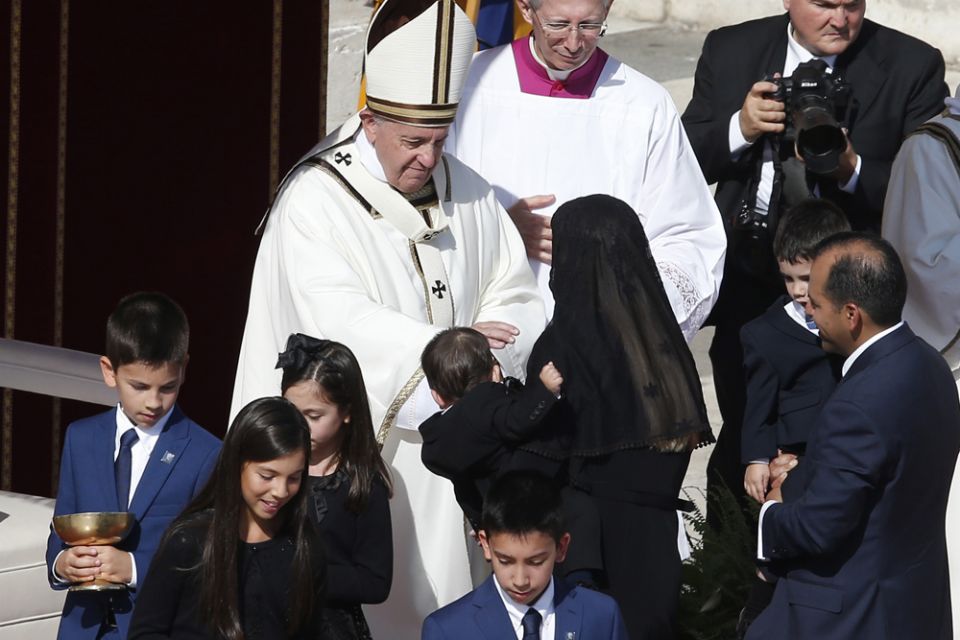 Pope Francis accepts offertory gifts from Melissa Villalobos of Chicago and her family Oct. 13 during the canonization Mass for five new saints in St. Peter's Square at the Vatican. (CNS/Paul Haring)

In an unprecedented article, published simultaneously on Oct. 12 in The Times of London and the Vatican's L'Osservatore Romano daily, Britain's Prince Charles hailed Newman's canonization as a cause for celebration "not merely for Catholics, but for all who cherish the values by which he was inspired."

Everyone, the prince added, could "embrace the unique perspective, the particular wisdom and insight, brought to our universal experience by this one individual soul."

"At a time when faith was being questioned as never before, Newman, one of the greatest theologians of the 19th century, applied his intellect to one of the most pressing questions of our era: what should be the relationship of faith to a skeptical, secular age," Prince Charles added. "His engagement first with Anglican theology, and then, after his conversion, Catholic theology, impressed even his opponents with its fearless honesty, its unsparing rigor and its originality of thought."

As a rare foray into religious territory from within Britain's otherwise secular establishment, the prince's words of praise were seen as important.

And they were backed up by the presence in Rome of representatives of Britain's government and parliament, as well as by diplomats, college heads and bishops from the official Anglican Church of England, to which the saint once belonged.

Related: With Newman, the church gains its 'saint for modern times'

The Dominican Archbishop Anthony Fisher of Sydney, an Australian expert on Newman, thinks the surprisingly warm official embrace of Newman was a significant indicator of growing concern about the poor state of civil discourse currently afflicting English-speaking countries.

Newman's teaching on the rights of properly informed consciences, asserted against the liberal, Darwinist and Marxist currents of his age, was first formulated in his years as an Anglican priest, Fisher said. So was his stress on the need for a radical assertion of human autonomy against the relativist denial of absolute values.

Archbishop Bernard Longley, from Newman's former Archdiocese of Birmingham, agrees. He plans to celebrate the canonization in joint religious events with the city's Sikh, Muslim, Hindu, Buddhist and Jewish communities, and highlight the new interest being shown in Newman's pastoral and spiritual contributions to the lives of ordinary people in his day.

This sometimes neglected aspect of the saint's mission, beyond his voluminous writings and theological insights, should now gain a "much wider audience," Longley said.

"The universal church is recognizing someone whose roots are very firmly in England, but who also achieved great things for Christian unity," he told NCR. "In our present troubled times, he'd urge us to be true to what we've received, and never lose sight of the light which is Jesus Christ. Although the life of the intellect is very important, Newman's motto, 'heart speaks to heart,' also calls us to be good evangelists and disciples, open and ready to listen in periods of division and disagreement." 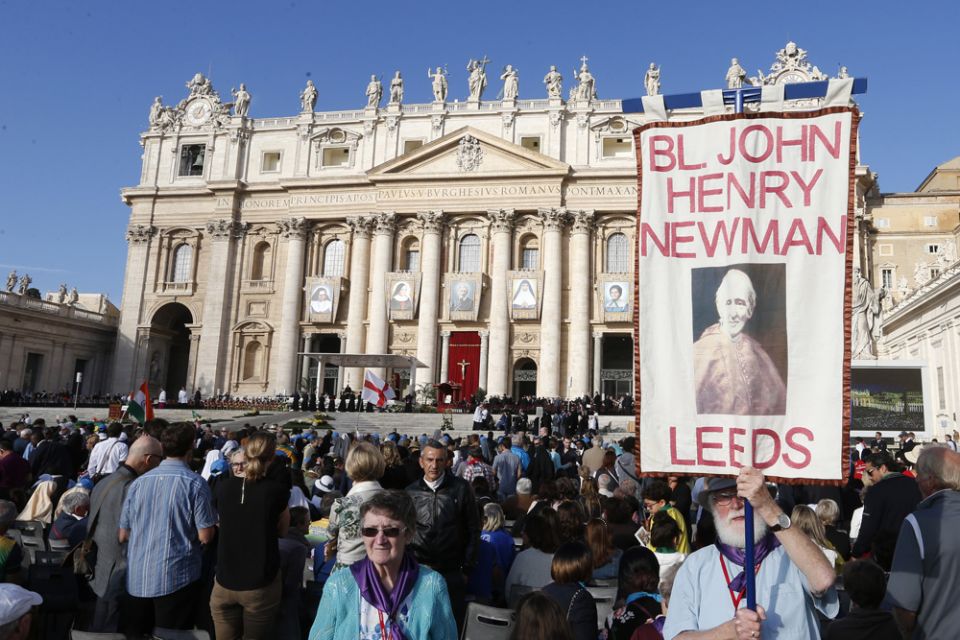 Born the son of a London banker in 1801, Newman studied and taught as an Anglican at Oxford University, serving as vicar of its St. Mary the Virgin church, and became a Catholic in 1845 after gaining prominence as leader of the Oxford Movement, which sought to return the Church of England to its pre-Reformation beliefs and rituals.

He later founded the Oratory of St. Philip Neri, a religious community of priests, and the first Catholic university in Ireland, and remained one of Britain's most controversial public figures, writing numerous classic works of philosophy and theology, as well as letters, poetry, hymns and homily texts, while also ministering to the poor and sick in Birmingham.

He was made an honorary cardinal by Pope Leo XIII in 1879, in honor of his achievements, 11 years before his death.

Newman's canonization was marked for English-speaking Christians by an Oct. 12 prayer vigil and concert of sacred music in Rome's Basilica of St. Mary Major, as well as an exhibition on his time in the city at the Catholic Venerable English College.

A celebratory symposium at Rome's Angelicum Pontifical University also looked at the saint's contribution to shifting paradigms in Catholic teaching, including his search for middle ground between late 19th century liberalism and ultramontanism, rationalism and fideism.

During an Oct. 12 Vatican meeting hosted by the British Embassy, Cardinal Marc Ouellet, prefect of the Congregation for Bishops, backed long-running calls for Newman to be declared a "doctor of the church," for his insights into the development of Christian teaching in face of cultural challenges.

The Canadian cardinal also stressed the saint's encouragement of Christian unity and contributions to an "ecumenical impulse towards reconciliation."

That focus on Newman the bridge-builder and conciliator looks set to emerge as key in coming years. Could the canonization of an English saint, the first of a non-martyred confessor for six centuries, with a profound grasp of the dilemmas facing modern Christians, make a real inroad into today's secular culture, with its hardened indifference to matters of religious faith?

In his article, Prince Charles lauded Newman for standing "for the life of the spirit against the forces that would debase human dignity and human destiny," adding that his example was now "needed more than before."

He had shown he could "advocate without accusation, could disagree without disrespect," the prince added, "and, perhaps most of all, could see differences as places of encounter rather than exclusion." 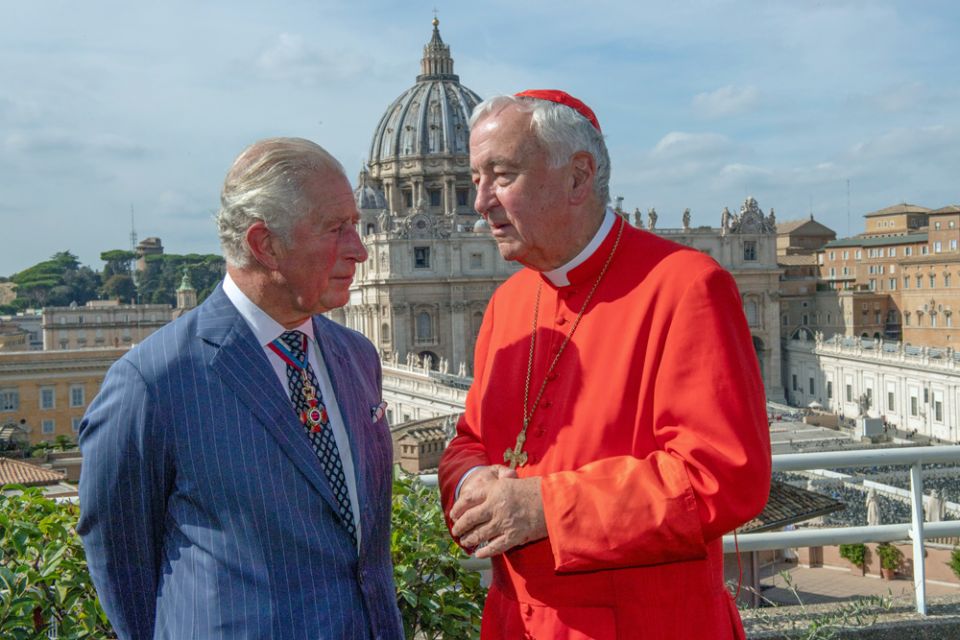 Britain's Prince Charles and Vincent Nichols of Westminster, England, chat during a reception Oct. 13 at the Pontifical Urbanian University in Rome, the day of the canonization of St. John Henry Newman and four others. (CNS/Arthur Edwards, pool via Reuters)

In the image of divine harmony which Newman expressed so eloquently, we can see how, ultimately, as we follow with sincerity and courage the different paths to which conscience calls us, all our divisions can lead to a greater understanding and all our ways can find a common home," Prince Charles continued.

Fisher thinks that capacity for "encounter rather than exclusion" explains Newman's contemporary relevance. The Catholic Church canonizes saints because they can offer examples for the present as well as interceding with God, he pointed out. 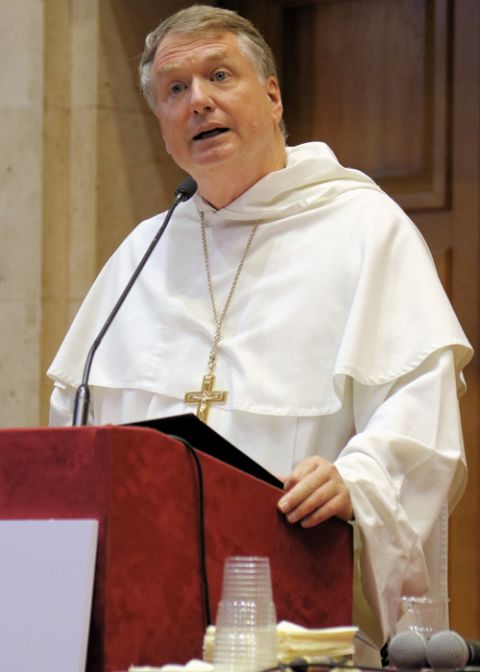 Archbishop Anthony Fisher of Sydney speaks at a symposium on Cardinal John Henry Newman at the Angelicum University in Rome Oct. 12, the day before Pope Francis declared the British cardinal a saint. (CNS/Simon Caldwell)

"Newman knew people could prudently apply principles and reach different conclusions about what to do in their particular circumstances. This didn't have to imply bad will or a poor intellect, or place someone outside the church," he told NCR.

"Certainly, humility and a properly formed conscience are needed to discern when we get things wrong. But in the Anglophone world where he's best known, and where there's now so much personal and political anger and disagreement, Newman's respect for human dignity and civility can provide a real inspiration. If people are dissatisfied with the factionalism and animus they see in society, and looking for something different, Newman may well have something to offer. But we'll have to present him properly — just putting a halo around his image won't be enough."

The head of the Catholic Church in England and Wales, Cardinal Vincent Nichols of Westminster, England, concurs that Newman's ecumenical ability to discern and communicate riches in both the Anglican and Catholic churches express his bridge-building potential.

"But throughout the English-speaking world, it's a joy that we can recognize a man who, throughout a complex and difficult life, also touched so many hearts," Nichols told NCR in Rome. "He speaks of the need for courage in following the Christian life — of being ready to be detached from the world in order to draw closer to Almighty God."

In his canonization homily, Francis quoted from one of the saint's best-known hymns, appealing to Christians to follow his example and strive to be like "kindly lights amid the encircling gloom."

Few will have felt that as directly as Sullivan, who still carries a treasured lock of the saint's hair to perform blessings in his name.

Sullivan says he was shocked and delighted when a second miracle was attributed to Newman in February, involving a personal acquaintance from Chicago, Melissa Villalobos, who was cured from a subchorionic hematoma in 2013 — knowing that similar miracles have sometimes taken centuries.

"All I know is that I asked Cardinal Newman to help me to walk again so I could return to my classes and be ordained a deacon — and that's what happened," Sullivan told NCR in Rome. "I believe in the communion of saints, and I know that if we have some contact with a saint, it becomes an ongoing, evolving relationship which points to some common good and greater purpose."

A version of this story appeared in the Nov 1-14, 2019 print issue under the headline: Roots in England .