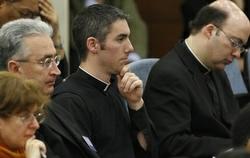 Deacon John Burns, a seminarian from the Archdiocese of Milwaukee, center, attends a theological conference on priestly celibacy at the Pontifical University of the Holy Cross in Rome March 4. Burns and several other seminarians from the Pontifical North American College attended the two-day conference. (CNS photo/Paul Haring

VATICAN CITY -- Exceptions to celibacy for priests in the Roman Catholic Church can be puzzling, including for young priests enthusiastic about their vocation.

The Pontifical University of the Holy Cross, run by Opus Dei in Rome, held a theological conference on priestly celibacy March 4-5 and while no one challenged mandatory celibacy, there were repeated questions about the exceptions made in some of the Eastern Catholic churches and for clergy coming from the Anglican Communion.

"If celibacy is so tied theologically and spiritually to priestly identity, why the exceptions?" the questioners asked.

Speakers at the conference, attended mostly by priests and seminarians, acknowledged the confusion caused by the exceptions and by the frequent statement that celibacy is a discipline, not a dogma, and so conceivably could change.

"In the eyes of many, the church hierarchy and especially the Apostolic See seem to hold contradictory positions on priestly celibacy," said Father Laurent Touze, a professor of spiritual theology and author of a book on the future of priestly celibacy.

"On the one hand, there is a firm insistence on the non-negotiability of celibacy," he said, while at the same time there are granted "exceptions to celibacy," including Pope Benedict XVI's provisions in late 2009 for ordaining as Catholic priests married former Anglican ministers.

Many people think, "If these exceptions are possible, why not abolish a frequently contested discipline and at least make it optional," Father Touze said.

For Father Touze, the answer lies in the spiritual and theological meaning of priesthood.

Priests are called by God to imitate Christ, the bridegroom, by dedicating themselves totally to God and to serving his people, he said. And they are called to stand in Christ's place at the Eucharist, pouring themselves out for the salvation of others, he said.

The conference also looked at another factor that often creates confusion regarding celibacy: the debate over the practice of the early church and the widespread assumption that celibacy for priests was a fourth-century invention of the church.

Father Stefan Heid, a professor at Rome's Pontifical Institute of Sacred Archeology and author of "Celibacy," a historical study, said Pope Siricius was insisting on a practice embraced by the Twelve Apostles and followed in the early church when he decreed in 385 that all clergy must live lives of perfect chastity.

"Popes do not invent anything," Father Heid said. "Siricius would have been made to look ridiculous suddenly imposing on thousands of clergy something that hadn't existed up to then."

Instead, the priest said his research led him to believe the pope's decree was a formal reaffirmation of church practice at a time when it was coming under attack.

Father Heid said that like the apostles, married men who became priests in the early church lived completely chaste lives after ordination. He described those who have tried to suggest Jesus himself was married, perhaps to Mary Magdalene, as romance novelists masquerading as biblical scholars.

The Bible does not speak explicitly about Jesus' celibacy, he said, which could be why so few theologians have reflected on priestly celibacy as an imitation of Christ rather than simply as a way of giving up everything for Christ as religious do.

"In any case, this silence is reflected in catechesis, which says nothing in this regard, so Christians often demonstrate perplexity and misunderstanding about this reality" and their confusion is increased "by not a few pseudo-scientific articles or by bizarre and false film portrayals of Jesus' sexuality," the archbishop said.

Jesus' choice not to marry "was not a casual choice. He chose to be himself," the archbishop said. By renouncing marriage, he was able to love all people with a self-giving and life-giving love.

Aquilino Polaino Lorente, a professor of psychopathology at the University of St. Paul Medical School in Madrid, said that accepting God's call to a vocation as a celibate priest "does not carry any more psychological risks than marriage does."

Human beings, with their intelligence and freedom, do not have to act on their sexual impulses in order to be happy and healthy, he said, and, in fact, never controlling those impulses is a sure sign of a serious psychological problem.

"Naturally, renouncing sexuality -- an important part of human love -- has a cost. But much less than most people think," he said. "To the degree that a person gives himself fully to the aim of his life and the reason for his existence, chastity costs less. To the degree that the person forgets himself and gives himself to others, renouncing sexuality weighs less because it is lived in the fullness of a freely chosen love."