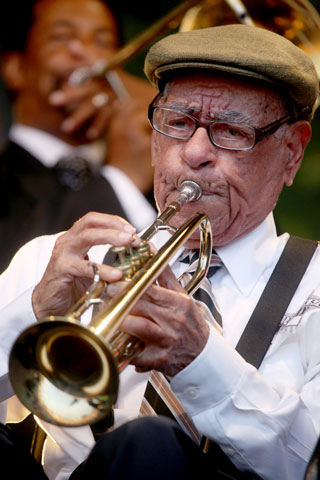 Lionel Ferbos performed the trumpet-style of New Orleans jazz that he learned as a young man until just a few months before his death July 19 at the age of 103.

For an artist who rarely left his native city before his 60s, Ferbos grew slowly into the persona of his 90s as the last of the old-time jazzmen, a human link to the era when America's indigenous art form first flowered.

He began his career with ensembles and big bands during the Great Depression, relying on a day job as a tinsmith to support his family.

In 1970, Lars Edegran, a Swedish-born transplant and founder of the New Orleans Ragtime Orchestra, invited Ferbos to join the group. As he transitioned into retirement from metalwork, Ferbos recorded with the ragtime orchestra, performing concert tours in Europe and various American festivals and nightclub bookings.

"Lionel was the perfect trumpet player for us with his reading skills, tone and style," Edegran told NCR. "He was really not an improviser, but depended on trumpet parts and stuck pretty much to the melody."

A venerated figure in his last decade, Ferbos was not a celebrity to rank with movie stars or people famous for being famous. Instead, Ferbos grew famous for being old, and tending the flame of music that spanned the years of his life.

His sendoff was true to form.

A rousing burial parade Aug. 2 followed the funeral Mass at Corpus Christi-Epiphany Church. The funeral included eulogies by Mayor Mitch Landrieu and Archbishop Gregory Aymond. The leave-taking befit the image of a mild-mannered gentleman who wore a coat and tie to his gigs and worked dutifully from the sheet music, playing his role in the instrumental weavings designed to induce people to dance.

"We will miss his kindness and his smile and his music and his many expressions of love," Aymond said.

In his long, productive twilight, Ferbos' main venue was the Palm Court in the French Quarter, a place with ceiling fans, potted palms, tables that serve food and the bar a few steps from the spacious dance floor. His 100th birthday party there drew an overflow crowd covered by The New York Times. His 103rd birthday at Palm Court on July 17 was brightened by a congratulatory letter from President Barack Obama and Michelle Obama. Two days later, he died in his sleep.

The wake, liturgy and burial procession -- for a man who outlived his wife of 72 years, his oldest son, and all of the musicians he played with -- conformed to a New Orleans tradition of funerals as an art form.

Six hundred people attended the Mass at Corpus Christi, historically an anchor of the colored Creole community. Several thousand more flooded the streets in the second line -- the tide of dancers who follow the brass bands in the long escort of the hearse and limousines to the cemetery. Trumpeters Kermit Ruffins, James Andrews, the Treme Brass Band, and a retinue of the city's major players and vocalists, including Charmaine Neville, marched in the parade alongside the Black Men of Labor, one of the social aid and pleasure clubs that parade on scheduled weekends between September and late May.

The twirling umbrellas and sashaying moves of the street dancers in the second line were all a piece of the culture that Ferbos extolled in his music.

John Boutté, a performer in the "Treme" series on HBO, sang "Over Into Glory Land" before the Mass.

During the service, rhythm-and-blues bandmaster Deacon John Moore -- who sings at enough funerals to qualify as a real deacon -- delivered a soulful version of "Ave Maria." He then told the congregants: "I'm going to miss that beautiful smile and his legacy. He was a guy who fit what Jesus was talking about: 'Blessed are the humble for they shall be exalted.' "

The humility Deacon John attributed to Ferbos was a grace note echoed in the poem delivered by the trumpeter's great-grandaughter, Leah Labat, as one of the eulogies:

In his winter years, he
remained modest as he was
pampered to his heart's
every wish.
He would relax in his bed and
practice music as he ate hot
meals from a fine China
dish. ...
I remember helping him put
on his jacket, and carry his
trumpet for his show.
True to the soul, when I would
ask him, "What do you want,
since you've been through
it all?"
He'd smile and ask me sweetly,
"Can I have a condensed
milk, nectar crème
snowball?"

"He was the last of the breed of the old Creole sheet-readers," Michael White, a clarinetist, composer and professor of jazz studies at Xavier University of Louisiana, told NCR.

"He had a beautiful tone on the trumpet, very compelling and personal. He read everything that he played," White explained, drawing a distinction between many of the young brass band musicians who play by ear, improvising rather than reading the music.

That delineation between the "reading" musicians and those who carry the melody and embellish "by ear" stretches back to the dawn of the jazz in the early 20th century.

There were no jazz recordings when Ferbos was born on July 17, 1911, into a working-class family in the Seventh Ward, an area well downriver from the fashionable Garden District mansions in the upriver, or Uptown, area. Jazz arose in the early 1900s as Uptown musicians, many of them darker blacks who played by ear, merged a blues-based sound with the ensemble style, accented by ragtime, played by the lighter-skinned Creoles in the Downtown wards.

The Creoles were a more educated, stable community, many of them Catholic, heavily concentrated in the Seventh Ward. The fabled reed player Sidney Bechet and future U.N. Ambassador Andrew Young grew up there a generation apart. The first three African-American mayors of New Orleans in the post-civil rights era and New York Times executive editor Dean Baquet were products of the Seventh Ward.

Since the 1990s, the neighborhood has seen an outmigration of the upwardly mobile, deepening poverty and drug violence.

The cultural divisions with Uptown musicians of the early jazz years, many of whom, like Louis Armstrong, were descendants of slaves, reverberated in an interview that string bassist Paul Dominguez gave Alan Lomax for the biography Mister Jelly Roll:

See, us Downtown people, we didn't think much of this rough Uptown jazz until we couldn't make a living otherwise. ... They made a fiddler out of a violinist -- me, I'm talking about. A fiddler is not a violinist, but a violinist can be a fiddler. I had to jazz it or rag it or any other damn thing. ... I don't know how they can do it. But goddamn, they'll do it. Can't tell you what's there on paper, but just play the hell out of it.

Ferbos trained as a tinsmith under his father and held a sheet-making job into his 70s. The early jazzmen who left the city in a diaspora of talent before the Depression -- Jelly Roll Morton, Armstrong, Joe "King" Oliver, Barney Bigard, among others -- made careers in Chicago and New York as the tight ensemble style of New Orleans gave way to the big band sound of the 1930s.

"Mr. Ferbos was a part of a particular Creole heritage that is still little understood outside of New Orleans," historian Mary Niall Mitchell of the University of New Orleans wrote in a Web posting on History News Network.

"Since the French colonial period, free men of color had begun to fill the demand for skilled artisans in New Orleans, and by the mid-19th century they dominated vital urban trades such as masonry, plastering and metalwork," she wrote. "But many of them were also active in the arts, playing in local orchestras and participating in politically charged literary circles."

Clarinetist and writer Tom Sancton, who performed often with Ferbos, echoed Mitchell in an email to NCR from Paris:

I think of Lionel as the last of the 19th-century trumpet players. He really came out of a musical tradition that was pre-jazz. When I heard his trumpet tone and his voice, I felt I was hearing echoes of a lost stratum of Creole culture. He was strictly a reader, not an improviser, but he played a jazz repertoire and brought a New Orleans lilt and swing to everything he played. He inspired younger musicians not only with his professionalism, but also with his sunny personality and perseverance. His message to the rest of us was practice, practice, and he was doing that himself until he finally became too weak to hold up a trumpet. He was a joy to play with.

[NCR contributor Jason Berry is co-author of Up From the Cradle of Jazz: New Orleans Music Since World War II.]

A version of this story appeared in the Sept 12-25, 2014 print issue under the headline: Farewell to a 103-year-old jazzman.