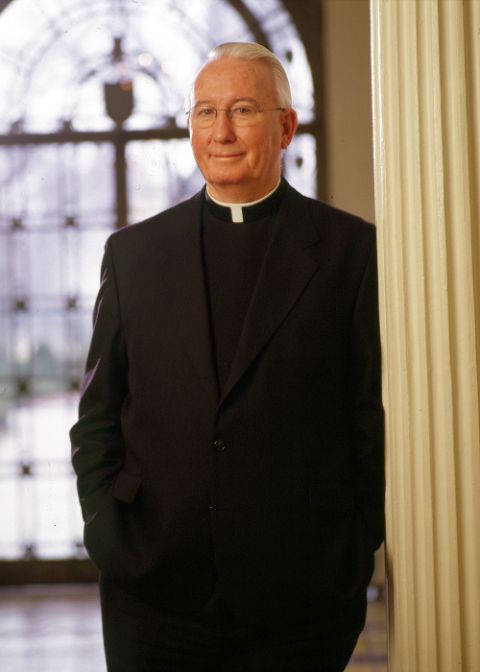 A native of the Bronx, O'Hare also was editor-in-chief of America magazine from 1975 to 1984 and won several Catholic Press Association awards as a columnist.

O'Hare became Fordham's 31st president in 1984 and held the position for 19 years until in 2003, the university said in a post on its website.

"Having served as Fordham's president for some time — though not as long as Father O'Hare — I have some insight into, and a deep appreciation for, how gifted he was as a leader, a communicator and a pastor," said Jesuit Father Joseph M. McShane, who succeeded O'Hare as university president.

"He placed all of his considerable intellect, integrity and vision in service of the university, and in doing so transformed Fordham into a powerhouse of Jesuit education. We will miss his wisdom, steady counsel and warm wit," McShane said in the website post.

O'Hare joined Fordham as president, arriving at a time when the Bronx, one of New York's five boroughs, was experiencing an economic and cultural revival. He helped guide the institution through its own comeback, school officials said. The priest helped the school transition from one largely attended by commuters to a university with a lively campus life and increasingly diverse student body.

In 1991, O'Hare launched a $150 million fundraising campaign, the largest at the time for a Jesuit university. The campaign surpassed its goal by more than $5 million.

Born Feb. 12, 1931, to Joseph and Marie O'Hare, he was raised in the close-knit Irish community of the Tremont section of the Bronx. Following graduation from Regis High School in Manhattan in 1948, he joined the Jesuits.

O'Hare told The New York Times that his decision to join the Society of Jesus was inspired by the work of Jesuit Father John Corridan and other priests fighting against corruption and organized crime on the New York waterfront in the 1940s.

His Jesuit superiors sent the young O'Hare to the Philippines to study for the priesthood and to teach. From 1955 to 1958 and again from 1967 to 1972, he served on the faculty at Ateneo de Manila University.

Between the teaching assignments, O'Hare returned to the United States to study philosophy and theology. He earned licentiate degrees from Woodstock College in Maryland and a doctorate in philosophy from Fordham in 1968. He was ordained a priest in 1961.

Beyond Fordham, O'Hare was a well-known civic leader, working alongside several New York City mayors. In 1988, Mayor Edward Koch named the Jesuit the founding chairman of the New York City Campaign Finance Board, which became a national model for campaign finance reform. O'Hare held the position for 15 years even though he was not reappointed by Mayor David Dinkins in 1993 after the board fined the Dinkins campaign $320,000. Mayor Ralph Giuliani reappointed O'Hare when he took office in 1994.

U.S. Supreme Court Justice Sonia Sotomayor worked with O'Hare as one of the board's founding appointees. Sotomayor called the priest "one of my heroes."

"Brilliant, witty, kind, gentle but firm, he lived his life caring and giving to so many," she said in a statement provided by the university. "The nation, the city of New York and the Bronx have lost a great man. I have lost a friend I greatly admired but whose principles continue to guide my life."

Throughout his tenure as president, O'Hare carried out pastoral duties as well. The university reported that he celebrated more than 7,000 Masses, including a "Mass of Remembrance and Hope" following the 9/11 attacks. He also performed numerous marriages and baptisms for the Fordham community.

After leaving Fordham in 2003, O'Hare served one year as president of Regis High School, his alma mater. He then returned to the America magazine staff, retiring in 2009.

The Jesuit is survived by nine nieces and nephews and several great-nieces and great-nephews.

A private burial is planned at the Jesuit Cemetery in Auriesville, New York. A memorial Mass will be held once the COVID-19 threat subsides, the university said.

Alex Trebek dies at 80; host of 'Jeopardy!' was educated in Catholic schools