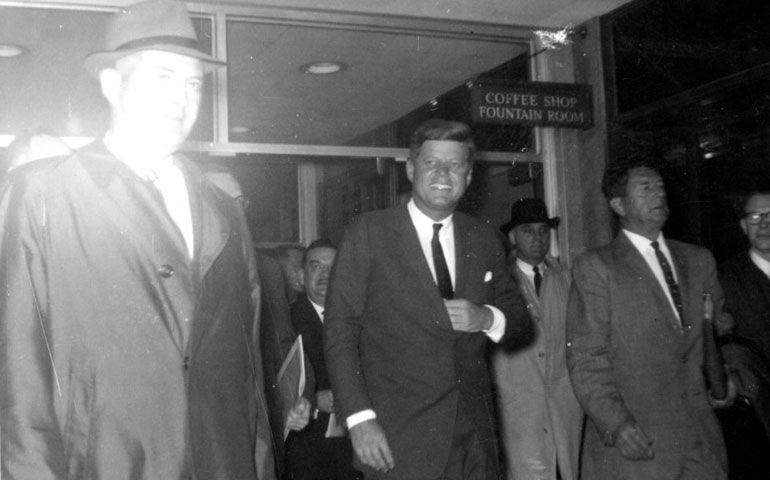 President John F. Kennedy in Milwaukee in May 1963 (Patricia Lefevere)

Dallas — Millions of us were eating our lunch on that fateful noon. Hundreds of thousands were in class or -- like me -- on their way to class. In my mouth, I had a bite of BLT from the sandwich shop downstairs of my dorm at Marquette University when I heard on WISN radio in Milwaukee that the president had been shot in Dallas.

My stomach began to turn. The sandwich was never finished.

I was among the first to inform my professor, Quentin Quade, that the president had been wounded. Quade, who taught a noon political science class in Johnston Hall, was about to start his 1 p.m. class in the same room when we who'd already heard the news plunked it on his desk.

An articulate intellectual the size of Orson Welles, Quade seldom looked at the two rows of students in our political theory class. We used to accuse him of lecturing to the Quirk and Gates filling station across the street. But on Nov. 22, 1963, he faced us all head-on.

Quade plucked two pieces of new chalk from a box and with a heavy hand pounded an arc across the blackboard. At each end of the crescent, he painted an "X" in white chalk. At the top, he layered a cross in yellow chalk.

Pointing to the two X's, which he labeled the ultra right and ultra left of the political realm, he told us: "It is the job of the president to harmonize the elements of the far right and the far left." Next Quade pointed to the cross at the top of the arc, telling us that it represented the president. "When the president cannot harmonize these disparate elements, the nation is in peril."

Suddenly a knock interrupted Quade. "He's gone," the voice of another instructor informed us all. The door closed. A blond male student seated behind my desk rose and announced that he was from Houston and that this was "the greatest day in American history."

I don't ever remember seeing the student before, nor ever seeing Quade so enraged. He grabbed both chalk sticks, broke them in half and tossed them toward the second row. I can still hear them whizzing by my ear. "Ladies and gentlemen," he said, though we'd never been addressed that way before, "I strongly suggest to you, the nation is in peril."

We left in tears, in silence, with indigestion and no evident homework. Many of us made our way next door to the Church of the Gesu, whose lower church was already swelling with student mourners and local Milwaukeeans. Never have I experienced such quiet.

Journalism majors like myself rushed to Copus Hall to see how we would record the day's horror. The twice-weekly edition of The Marquette Tribune had already hit campus newsstands early that Friday. It was decided another edition should be published and we would all contribute reaction stories. I ran to my dorm to fetch a photo I'd taken of Kennedy the previous May when he visited Milwaukee. The handsome president is standing under a sign at the Schroeder Hotel coffee shop, talking to a number of press and aspiring reporters.

It was my second meeting with him. My sister and I had seen him close-up in 1960 at the Minnesota Democratic-Farmer-Labor Party bean feed, an event sponsored in presidential campaign years, and held at the Minneapolis Arena. Our dad waited in a parking lot nearby as his two excited teenagers cheered the candidate and grabbed a fistful of political literature and campaign buttons.

Our father, Clarence Scharber, the chairman of rural and largely Republican Hassan Township, had been interviewed by the Minneapolis Star on Election Day 1960, as Hassan's Town Hall was thought to be the oldest in Minnesota. In the photo run in the next day's paper, Dad is sitting with his cronies listening to a portable radio he'd brought with him after supper. The news of exit polls in the Northeast indicated that Kennedy would likely be elected -- the youngest and the first Catholic president in the nation. Our father is wearing an anticipatory victory smile.

The mistake Dad made was not in voting for Kennedy, but in bringing the radio to the election hall as the men tallied the ballots, which largely favored Nixon in our precinct. My sister and I took turns over the years riding with Dad late at night to turn in the ballots at Hennepin County election headquarters in Minneapolis, some 20 miles away.

I went home for Thanksgiving in 1963, though there seemed little to give thanks for that year. My mother had died the first week of classes my freshman year at Marquette and my dad died the Christmas following my graduation. To this day, both deaths seem to bookend the Kennedy murder, which has never lost its drama and pathos for me.

The weekend of the assassination, my dad, sister and I -- like millions more -- watched as Jack Ruby shot Lee Harvey Oswald when he was being transferred to the Dallas County Jail. As a fledging journalist, I had never witnessed such riveting television. That Kennedy and Oswald would both end up on a gurney in Parkland Hospital within 48 hours of each other seemed merely ironic at the time.

Today, the irony is more personal as I make frequent trips to Dallas where my daughter and son-in-law have lived since 2010 and where my first grandchild was born last year. I have journeyed back to the Sixth Floor Museum, the book depository from where Oswald found his target, and to Parkland Hospital.

My son-in-law, while a student at University of Texas Southwestern Medical Center, did his surgery rotation with one of the doctors who had labored to save Kennedy. In the last two years, I have been in touch with Phyllis Hall, a nurse assigned to the ER at Parkland on that infamous day. Hall shared her memories of the pandemonium in the ER, of the understandable unwillingness of Jacqueline Kennedy to vacate the side of her dying or dead husband despite entreaties for her to leave the crowded ER.

Hall recalled "the controversy brewing to remove Kennedy's body out of the ER." She told NCR that Texas law demanded an autopsy be performed before a body could be taken out of the state when the person had died "in such a manner." But Texas "lost," she said, and JFK's corpse was placed on Air Force One and flown to Bethesda, Md., where the autopsy was done.

Hall also remembered a priest -- Vincentian Fr. Oscar Huber -- giving the last rites to the stricken president. Huber, who died in 1975 at age 81, was pastor of Holy Trinity Parish at the time of the assassination. He had watched the Kennedys riding from Love Field airport in their motorcade and wrote at the time that he thought he saw the president wave at him when he noticed his Roman collar.

Huber returned to his rectory and was eating lunch when his assistant pastor, Fr. James Thompson, who had been watching TV, told Huber that Kennedy had been shot. Immediately, the pair set out for Parkland, which was within the parish's perimeter. Huber was quickly ushered into Trauma Room One, where he removed the sheet covering the president's wounded head and then "conditionally anointed him," as if he had life in his body, said Steve Landregan, who had called the parish when Mrs. Kennedy requested a clergyman. The priests were already on their way.

Landregan, who was assistant administrator at Parkland in 1963, watched Huber administer the sacrament of extreme unction to Kennedy. "The president was moribund when he was brought in -- the death process had begun and was irreversible," Landregan told NCR, but at what moment death actually happens, no one really knows, he said.

Now 85, Landregan works as archivist and historian for the Dallas diocese. His 11 pages of testimony given to the Warren Commission make for gripping reading of just what occurred at Parkland during the two days in which both Kennedy and Oswald died there. Not only was Parkland the venue for two of the most dramatic days in American history, it also became the temporary seat of the U.S. government and of the government of the state of Texas, housing Gov. John Connally, who was also wounded by Oswald, and providing a secure venue for the ascending President Lyndon Johnson.

Through it all, Landregan managed to see to the needs of the Kennedy and Connally families, procure a coffin for the president's flight to Washington, set up a press center and hold press briefings. And Parkland "continued to function at close to normal pace as a large charity hospital," he said.

I find it hard not to recall that day 50 years ago whenever I drive from Love Field to visit my grandson or when I attend Mass at Holy Trinity, which is in walking distance of my daughter's apartment. What I remember often, too, is an interview that British journalist David Frost conducted with Rose Kennedy in Hyannis, Mass., just after her 80th birthday. Rose had already lost four children to plane crashes and assassinations. Frost wasted no time in reprising her husband, Joe Kennedy's bootlegging, adultery and mob connections or her daughter Rosemary's lobotomy. There was alcoholism, divorce and Chappaquiddick to fill up the hour.

Then Frost laid an egg on the Hyannis coffee table, asking Rose how she managed to stay so strong in the midst of such adversity, sorrow and loss. The matriarch looked dumbfounded by his inquiry. Was he not listening? Had he not heard anything she had said? Then, pointing to a painting of the Virgin Mary on her living room wall, Rose proclaimed her endurance emanated from the mother of Jesus. Mary, she noted, didn't have an easy life either. Frost let the camera complete the story in silence.

The room was as quiet as Gesu on the day her son Jack was murdered in Dallas.

In new book, Eunice Kennedy Shriver finally gets her due

A life that's spiritual -- but not 'nice'

Remembering the assassination that defined a generation