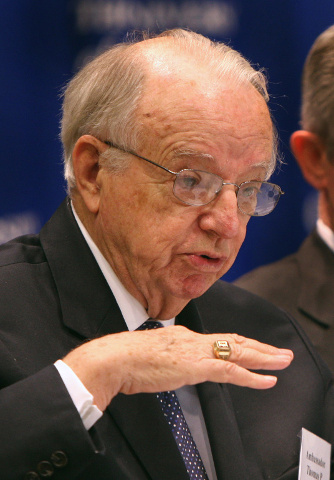 Former U.S. Ambassador to the Vatican Thomas Melady, who died Jan. 6 at age 86, is pictured in a 2009 photo. Melady, ambassador to the Holy See from 1989 to 1993, served in several diplomatic posts and continued to play a role as "citizen-scholar" long p ast the age when many other people would have retired. (CNS/Bob Roller)

WASHINGTON -- Former U.S. Ambassador to the Vatican Thomas P. Melady, who served in several diplomatic posts and continued to play a role as "citizen-scholar" long past the age when most people would have retired, died Jan. 6. He was 86.

Melady died at his Washington home of a brain tumor, which doctors only recently diagnosed.

Melady was an ambassador under three presidents: to Burundi (1969) and Uganda (1972) under President Richard Nixon, and then as the ambassador to the Holy See under President George H.W. Bush (1989) and in the first year of the administration of President Bill Clinton. Melady left the post in early 1993. He also was named by Nixon as senior adviser to the U.S. delegation to the U.N. General Assembly.

He was remembered by one of his successors to the Holy See post as "a perpetual ambassador."

University of Dayton professor Miguel Diaz, who was ambassador from 2009 to 2012, told Catholic News Service that Melady was the first former ambassador to reach out to him when Diaz was nominated and that he continued to be a welcome adviser and mentor.

"Once my nomination was made public, he immediately took me out to lunch and we had a tete-a-tete on Vatican diplomacy," Diaz said, with Melady offering helpful advice about what challenges Diaz might face.

Across differences of political party and generation, "it grew into a collegial friendship," Diaz said.

In the very small group of former U.S. ambassadors to the Holy See, Melady "was the leader of the club," said Diaz. He observed that despite their activism with different political parties -- Diaz with the Democrats and Melady with the Republicans -- the two wound up as co-signatories of an assortment of letters and statements on public policy.

Melady's death is "truly a loss, not just for the Melady family but for all of us, Diaz said. "We don't have many people like him left."

In addition to his ambassadorial posts, Melady was a prolific writer, with 17 books, including "Profiles of African Leaders, Idi Amin Dada: Hitler in Africa," "The Ambassador's Story" and "Ten African Heroes," and more than 180 articles to his credit. He most recently had been senior diplomat in residence and a professor at the Institute of World Politics in Washington, teaching a course on the art of diplomacy; mentoring students and helping develop the institute's policy and philanthropic circles, said a post on the organization's website.

"Tom was the epitome of the citizen-scholar and diplomat, dedicated to serving his country and the cause of peace in the world," said a comment from John Lenczowski, founder and president of the institute. "He exposed our students to a rare diplomatic professionalism that was perfect for our students' study of this critical art of statecraft."

Besides his expertise in diplomacy and politics, Melady wrote and taught on Afro-Asian and Central European issues.

The institute post observed that Melady's service at the Vatican came at a pivotal point, when the Soviet Union was collapsing and Pope John Paul II was playing a role in reshaping Eastern Europe.

"He was such a great soul," said Stephen Schneck, director of the Institute on Policy Research and Catholic Studies at The Catholic University of America, who counted Melady as a friend.

"In Washington he was about the only person I know who could truly and easily speak to people on both sides of the (political) aisle," Schneck said. "And he was a great friend to the church."

"To a whole generation of us he was a mentor and exceedingly generous," Schneck added. "He would take people like me under his wing and talk about things like the realities of government service. The same with education. He would often work with young scholars and try to prepare them for their work in education."

In 2010, the university's institute awarded Melady the Bishop John Joseph Keane Medallion for lifetime service to church, country and academia. A statement from Schneck called Melady "a brilliant scholar, a renowned diplomat, a distinguished educator, a compassionate Catholic leader, a generous confidant to bishops and presidents, professors and politicians."

New York Cardinal Timothy M. Dolan said in an email forwarded to CNS: "I'll miss Tom as a friend, a teacher, and a statesman."

Dolan said that as ambassador to the Holy See, "Tom perceptively appreciated both America's global duties and the Vatican's moral and supernatural influence. We'll miss his wisdom and his unfailingly insightful read on international affairs."

Melady was born March 4, 1927, in Norwich, Conn., and served in the U.S. Army at the close of World War II. He earned degrees from Duquesne University and The Catholic University of America and taught at St. John's University. As an early proponent of African studies, he served from 1959 to 1967 as the president of the Africa Service Institute, which brought leaders of newly independent African nations to the United States. He was an adjunct professor at Fordham University from 1966 to 1969, when he began his diplomatic service.

He later went on to serve as chairman of Seton Hall University and as a consultant to the National Urban League. After his diplomatic service, he taught at George Washington University and was president of Sacred Heart University in Fairfield, Conn., from 1976 to 1986.

In a letter to the Sacred Heart University community on the school's website Jan. 7, President John J. Petillo said Melady's service came during a time of great change for the university, as it grew from "a start-up college to an acclaimed regional university."

"His vision played an important role in Sacred Heart becoming not only the nationally known university it is today, but also in our reputation as a special place where members of the community are treated with respect and dignity," Petillo said.

Melady is survived by his wife of 52 years, Margaret, with whom he co-wrote several books; daughters Christina Melady and Monica Melady Micklos; and seven grandchildren.

A funeral Mass with Washington Cardinal Donald W. Wuerl presiding was scheduled for Jan. 13 at the Cathedral of St. Matthew the Apostle in Washington. Sacred Heart University scheduled a memorial Mass for the following day.