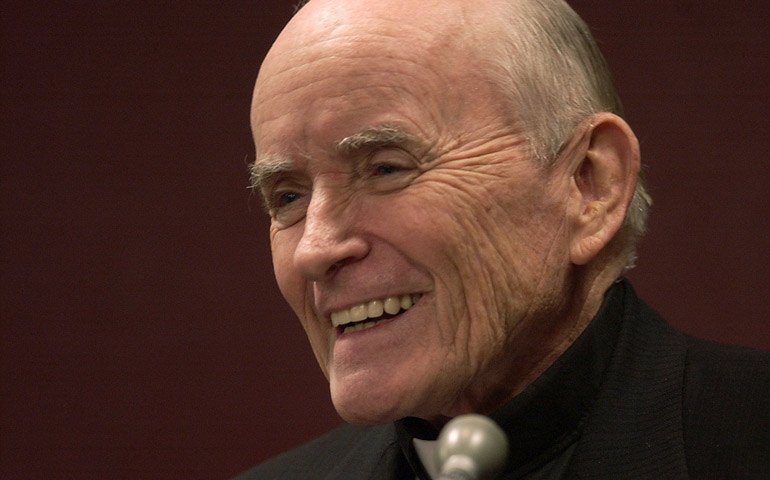 Fr. Andrew Greeley speaks during a panel discussion on "Being Catholic in Chicago," part of the four-day Catholic Festival of Faith, in 2003. (CNS/Karen Callaway)

Fr. Andrew Greeley, an eminent sociologist of religion who also happened to be probably the best-selling priest-novelist of all time and the Catholic church's most prominent in-house critic, died Wednesday in Chicago. He was 85.

Greeley had been in poor health since an accident on Nov. 7, 2008, that left him with traumatic brain injury. On that afternoon, an article of his clothing was caught in the door of a departing taxi, he was thrown to the ground and hit his head. He never fully recovered from the injury.

Writing about Greeley in 2010, Eugene Kennedy, said that although he looks at the newspapers daily and scans emails, Greeley “lives now in twilight and visitors report that they are not sure what he sees or hears.”

"This is like a biblical incident in which a good man is suddenly and tragically blinded or made mute so that only the touch of Jesus’ hand can set him free again," Kennedy wrote.

Over the course of a career that generated a staggering 72 nonfiction books and 66 novels, Greeley became the voice of the liberal American Catholicism of his generation -- critical, but deeply loyal. Greeley could be too Catholic for both some on the secular left and the most embittered of the church's dissidents, as well as too outspokenly liberal for the Catholic establishment, but he was always a compelling and commercially successful player on the American stage.

Born into a large Irish Catholic family in Oak Park, Ill., in 1928, Greeley was ordained a priest of the Chicago archdiocese in 1954. He earned a doctorate in sociology from the University of Chicago in 1962. Buoyed by both the Kennedy-era New Frontier and the reforming spirit of the Second Vatican Council (1962-65), Greeley's early sociological work focused on the emancipation of American Catholics into the country's political and cultural mainstream.

Throughout the 1960s and '70s, Greeley produced a torrent of influential sociological works, including 1972's Unsecular Man: The Persistence of Religion and 1977's The American Catholic: A Social Portrait. His studies of the Catholic priesthood in America and the Irish-American experience were especially well-regarded, and at one point in the early 1970s, the U.S. bishops commissioned Greeley to profile the country's priests. He would later become a research associate at the National Opinion Research Center at the University of Chicago, one of the largest and most respected social research institutes in the country.

As a result of his studies, Greeley became fascinated by what his friend and noted University of Chicago theologian David Tracy calls the "analogical imagination." The idea is that visible, tangible things in the created order serve as metaphors for the divine, as opposed to the more textual and literal religious sensibility of Protestants and others. That's one of the reasons, Greeley believed, that the Catholic church over the centuries has been a great patron of the arts: It grasps the power of imagery to convey what precise doctrinal formula cannot.

In 1975, that belief in the spiritual power of art led Greeley to publish his first novel, The Magic Cup. His breakthrough success came with 1981's The Cardinal Sins, which followed the lives of two sons of an Irish-Catholic family in Chicago who went on to become priests. The novel skewered what Greeley saw as the hypocrisy and dysfunction of clerical culture. One reviewer said The Cardinal Sins "did for the Catholic church what The Godfather did for the mafia."

What really got people's attention, however, was the novel's explicit sexuality. By the standards of most commercial fiction, it was fairly tame, but the idea that a priest would pen steamy sex scenes caused outrage in some Catholic circles. The National Catholic Register, for example, opined that Greeley had "the dirtiest mind ever ordained."

In a 1999 interview with NCR, Greeley insisted the sex in his novels wasn't just about ripping bodices.

Greeley always insisted the sex scenes were nothing more than the product of his imagination. He never broke his vow of celibacy, he said, and as a sociologist, he said hard empirical data confirm that celibate priests who enjoy their work are among the happiest people on earth.

In the realm of Greeley's fiction, perhaps his most enduring character was the mystery-solving priest (and later, bishop and archbishop), Blackie Ryan -- a wise, compassionate figure who blends street smarts with erudition, who's impatient with cant and pomposity (especially of the ecclesiastic sort), but who has a soft spot for people in need. Most reviewers over the years saw Ryan, the hero of 17 novels, as a thinly disguised version of how Greeley saw himself.

Greeley once said he wrote an average of 5,000 words every day, and for the better part of five decades, he brought out an average of two to three books every year. Greeley always had a gift for sound bites, so to charges that he "never had an unpublished thought," he would typically reply, "Why should I practice contraception on my ideas?"

It's likely Greeley sold more books than any other priest in history. In 1999, Greeley said he had a core readership of 250,000, meaning people who buy almost every novel he put out. At $6.99 apiece for a paperback edition, that came to $1.7 million in sales per novel virtually guaranteed, with the potential for higher sales if a book broke out beyond the core. Greeley's fiction alone over the course of his prolific career probably generated at least $110 million in gross income.

Although Greeley pocketed only a share of that money, it allowed him to live comfortably in downtown Chicago's elite Hancock Tower. He plowed much of his wealth into good Catholic causes. In 1986, for example, Greeley established a $1 million Catholic inner-city school fund, providing scholarships and financial support to schools in the Chicago archdiocese with a minority student body of more than 50 percent. He also endowed chairs at the University of Chicago and at St. Mary of the Lake Seminary in Mundelein, Ill., where he prepared for ordination to the priesthood in the 1950s.

The explicit sexuality and obvious liberal perspective of Greeley's writing tended to induce bishops to keep him at arm's length. Chicago Cardinal Albert Meyer, who served from 1958 to 1965, released Greeley from regular priestly duties to pursue his sociological scholarship, and Greeley always remained a priest in good standing.

Of the four archbishops Greeley watched come and go in Chicago, he had mixed views. Meyer "died too young" and was "awfully smart"; Cardinal John Cody was "a madcap tyrant" (Greeley said in 1999 that his opinion about Cody "hasn't softened at all"); and Cardinal Joseph Bernardin "died a saint" but "sought consensus on everything and wanted to make everybody happy."

Easily his favorite was the present occupant of the job, Cardinal Francis George, who befriended Greeley after taking over in 1997. The two became regular operagoers together, and Greeley, for whom personal loyalty was paramount, emerged as one of George's most vocal defenders, calling him "the brightest man I've ever known."

"Father Greeley has given great attention to the role of imagination in the life of faith," George said in a 1999 interview. "What he is doing is re-evangelizing the imagination, using fiction to express the faith and the mysteries of the faith. That's an extraordinarily significant project."

Greeley's success as a novelist never deterred him from continuing his work as a sociologist and commentator on current affairs. For much of his career, he divided his year between Chicago and Tucson, Ariz., where he was a professor of sociology at the University of Arizona. He also achieved prominence as a journalist, writing a weekly column for the Chicago Sun-Times and contributing regularly to a wide variety of American and international publications, including NCR.

The progressive Catholic values of the 1960s informed Greeley's approach, both to secular politics and to the church. Over the years, he supported ordaining married men and women as priests, attacked what he saw as the inflated power of the Vatican, and railed against what he termed the "original sin" of clerical culture: envy. He was no less a lefty in secular terms; his last nonfiction book was titled A Stupid, Unjust and Criminal War: Iraq 2001-2007.

Yet Greeley was very much his own man, unafraid to skewer nostrums of the left just as much as those of the right. He was critical of liberation theology ("It was a terrible mistake to get in bed with Marxism"), some strains of feminism ("If you define reality as a class conflict between men and women, you'll never get out of it unless men surrender"), and Catholic pacifists such as Jesuit Fr. Daniel Berrigan ("We're still friends, but I completely disagreed with his tactics during the war"). He repeatedly asserted that anti-Catholicism remained one of the few fashionable prejudices left in America.

Though Greeley denounced clerical sex abuse as early as the mid-1980s, he was also fiercely critical of what he saw as exaggerated criticism of the church from some organized victims' groups. He asserted in 2002 that these activists "probably would not be satisfied if the Vatican had mandated castration for every priest in the nation."

Prominent among Greeley's passions was his love affair with his own hometown. He was a classic example of what Chicagoans call a "lifer," meaning someone who might travel far and wide, but who never felt at home anywhere other than the Windy City. Greeley was an avid fan of the Bulls, Bears and Cubs, and his trademark literary creation, Blackie Ryan, typically sported a Chicago Bulls windbreaker.

At the end of the day, Greeley saw his wide-ranging literary endeavors as a service to the church, whether Catholic officialdom was always prepared to see it that way or not.

"I think writing the kind of fiction I write is an exercise in priestly ministry," he said. "It's talking about the good news of God's love in a format where it will be accessible to lots of people. My stories have had an enormous effect. That's good news."