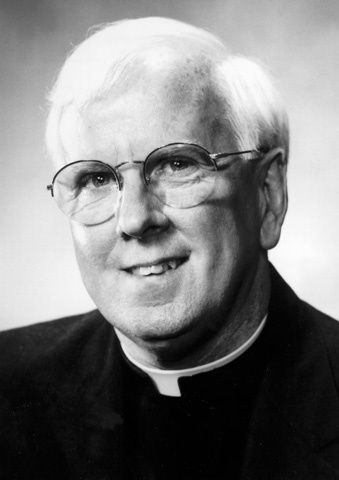 Salvatorian Fr. Robert Nugent, co-founder of New Ways Ministry, died Jan. 1 at a hospice care facility in Milwaukee at age 76 after a three-month battle with cancer. He is pictured in an undated photo. (CNS file photo)

Fr. Robert Nugent, a Roman Catholic priest silenced by the Vatican for his work with gay and lesbian Catholics, died Wednesday after a three-month battle with cancer. He was 76.

In many ways, the scrutiny of Nugent's activism symbolized the Vatican's approach to all talk of homosexuality under Popes John Paul II and Benedict XVI -- what one gay Catholic group called a "witch hunt" -- compared with the more tolerant "who am I to judge?" tone set recently by Pope Francis.

Nugent, a member of the Salvatorians religious order, co-founded the Maryland-based New Ways Ministry in 1977 with Sr. Jeannine Gramick to build bridges between the gay community and the Catholic church. Their activities drew repeated condemnation from U.S. Catholic leaders in the 1980s.

"His ministry was more than a welcome," said Francis DeBernardo, the group's executive director. "He had the wisdom to know that the real moral problem in the church was not the lives of lesbian and gay people, but the ignorance and fear out of which many church leaders and officials operated."

Nugent served as a consultant for the U.S. Conference of Catholic Bishops on its 1997 pastoral document on homosexuality, "Always Our Children."

But two years later, after the Vatican ruled that Gramick and Nugent's work was "erroneous and dangerous," Cardinal Joseph Ratzinger (later Pope Benedict XVI) permanently banned Nugent and Gramick from working with the gay and lesbian community, saying their pro-gay work had "caused confusion among the Catholic people and have harmed the community of the church."

The pair were cited for refusing to accept church teaching on the "intrinsic evil of homosexual acts," and Nugent was condemned for questioning "the definitive and unchangeable nature of Catholic doctrine in this area."

"The Congregation for the Doctrine of the Faith is obliged to declare for the good of the Catholic faithful that the positions advanced by Sister Jeannine Gramick and Father Robert Nugent regarding the intrinsic evil of homosexual acts and the objective disorder of the homosexual inclination are doctrinally unacceptable because they do not faithfully convey the clear and constant teaching of the Catholic Church in this area," the decree said.

In 2000, the Vatican issued a second decree, barring Gramick and Nugent from speaking about the 11-year investigation into their work; Nugent agreed to comply, but Gramick did not, saying: "I choose not to collaborate in my own oppression by restricting a basic human right. To me this is a matter of conscience."

While Nugent largely complied with the order and stayed in the shadows, Gramick continued to work and speak publicly on behalf of gay rights and other progressive causes. She remains listed as a co-founder of New Ways Ministry and now serves as executive co-director of the National Coalition of American Nuns, a small and liberal group of U.S. nuns.

Gramick was by Nugent's side when he died Wednesday at a hospice wing at a Catholic retirement community in Milwaukee.

In 2010, New Ways Ministry again drew the ire of U.S. Catholic leaders for criticizing the hierarchy's advocacy against same-sex marriage.

"Like other groups that claim to be Catholic but deny central aspects of Church teaching, New Ways Ministry has no approval or recognition from the Catholic Church and that they cannot speak on behalf of the Catholic faithful in the United States," said Chicago Cardinal Francis George, then president of the bishops' conference.