Ghanaian cardinal destined to be an ecclesiastical star 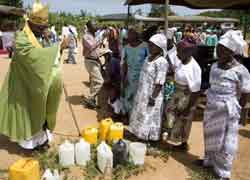 Cardinal Peter Turkson of Cape Coast, Ghana, blesses jugs of water to be used as holy water June 9 during his two-day pastoral visit to the small village of Ekumfi Nanaben.

For the better part of three decades, the phrase “African pope” almost automatically beckoned images of Cardinal Francis Arinze, a smiling, charismatic Nigerian who loomed in the popular imagination as the best prospect to become the first African pope since Gelasius I in the late fifth century, and only the third African pope in history.

Arinze, however, is now retired and will turn 77 on Nov. 1. With the opening today of the second Synod for Africa, the torch has in effect been passed to Africa’s next great papabile, or candidate to become pope: Cardinal Peter Turkson of Ghana, who will celebrate his 61st birthday on Oct. 11.

Asked this morning during a Vatican news conference if the Catholic church is ready for a black pope, Turkson answered simply: "Why not?"

"We've had Kofi Annan as Secretary General of the United Nations ... he had his problems, but he did it. Now we have Obama in the United States. So, if by divine providence, God would wish to have a black man as pope, I say thanks be to God!"

It was vintage Turkson -- candid, charming, and delivered with a healthy dose of humor.

Turkson is the relator, or general secretary, of this Synod for Africa, and today he delivered the major programmatic opening speech, the Relatio ante disceptationem. In a symbolically fitting touch, he did so in the presence of Arinze, one of three co-presidents of the synod.

To be sure, all the normal cautions about papal forecasting apply. At age 82, Pope Benedict XVI is by all accounts in robust health, and seems set to continue leading the church for some time. Moreover, attempting to predict the next pope is a notoriously hazardous enterprise. The trash heaps of church history are littered with the carcasses of would-be prophets who have tried and failed.

Yet Turkson is a smart, hard-working, and charming prelate, and as Africa’s youngest cardinal, he’s destined to be an ecclesiastical star even if he never takes over the church’s top job.

Theologically, he’s seen as a moderate: For example, Turkson has signaled openness to the argument that condoms might be appropriate for couples where one partner is HIV-positive and the other isn’t, on the logic that the intent in that case is not to prevent pregnancy but to prevent disease.

In the past, the post of relator has sometimes foreshadowed bigger things to come. Both Cardinals Karol Wojtyla of Cracow and Joseph Ratzinger of Munich once served as the relator for a synod of bishops before becoming Popes John Paul II and Benedict XVI, respectively.

Benedict himself obviously takes the appointment seriously. In the two previous synods of his papacy, the relators have been figures close to the pope who have themselves been widely rumored as possible successors: Cardinal Angelo Scola of Venice and Marc Ouellet of Quebec City in Canada.

For months now, Turkson has been widely tipped for a major post in the Roman Curia: President of the Pontifical Council for Justice and Peace, succeeding Italian Cardinal Renato Martino, himself almost 77. The hold-up is apparently due to Turkson himself, who’s made it known that he doesn’t want the job, preferring to focus on his pastoral obligations in Ghana. Nonetheless, it’s more or less taken for granted, both in Africa and in Vatican circles, that Turkson will wind up in Rome.

If so, that could propel Turkson even further up the list of possible papal candidates, since it would give him a bit of Roman seasoning. In addition, the Council for Justice and Peace is considered an important assignment, since its president is often called upon by the media to apply Catholic social teaching to whatever global crisis happens to be boiling at a given moment.

The confidence Turkson enjoys can be glimpsed from the long list of dicasteries, or offices of the Roman Curia, to which he belongs: the Congregation for the Evangelization of Peoples, the Congregation for Divine Worship and the Discipline of the Sacraments, the Pontifical Council for Promoting Christian Unity and the Pontifical Commission for the Cultural Heritage of the Church, in addition to the Council for Justice and Peace.

Born in Wassaw Nsuta in Western Ghana in 1948, Turkson studied at two local seminaries and at St. Anthony-on-Hudson in Rensselaer, New York (which later closed) before his priestly ordination in 1975. Among other things, that means Turkson is young enough that both his studies and priestly career have unfolded almost entirely in the period after the Second Vatican Council (1962-65).

In 1992, Turkson earned a doctorate in scripture from the prestigious Pontifical Biblical Institute in Rome. Later that year, he became the Archbishop of Cape Coast in Ghana. He was 44 at the time, making him one of Africa’s younger senior prelates. He was named a cardinal by Pope John Paul II in 2003, becoming the first-ever cardinal from Ghana.

Turkson’s tribal language is Fante, and he’s comfortable in English, French, Italian, and German. As a Biblical scholar, he also knows Hebrew, Greek and Latin.

In recent years, Turkson has acquired a reputation as a leader in relations with two groups often seen as rivals to Catholicism on the African continent: Pentecostals and Muslims. In both cases, Turkson manages to blend a clear defense of the faith with an apparently sincere desire for dialogue, and a capacity to learn from what the others do well.

From the Pentecostals, Turkson has argued that Catholics can learn to put more emphasis on the gifts of the Holy Spirit – healings, intercessory prayer, and so on, in addition to their strong emphasis on a personal relationship with Jesus.

With Muslims, Turkson has encouraged Catholics to study the Qur’an as a bridge to understanding. He’s also taken up Pope Benedict’s call for inter-cultural, rather than precisely inter-religious, dialogue, pursuing areas of common effort on charitable and social justice projects.

Additional reports from the Synod for Africa are here:

Check the NCR Today blog throughout the day for updates on the synod for Africa from NCR senior correpsondent, John L. Allen Jr.

People | Ghanaian cardinal destined to be an ecclesiastical star